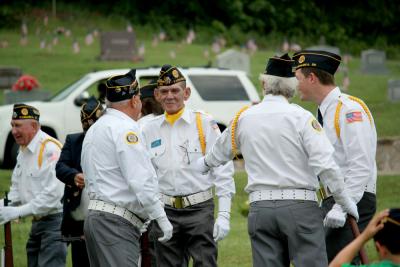 LeeAnn Ammons is a proud American. For her, Memorial Day isn’t about barbecues or sales at the local businesses. It’s a time to honor her late husband Larry, who served in the Vietnam War, and her late Osage uncles who bravely served in America’s wars.

She and many others gathered at the Pawhuska Cemetery on May 27 to pay tribute as The Harold Bigheart Smalley American Legion Post 198 performed a gun salute and placed a wreath at the mausoleum steps in honor of fallen soldiers.

“It actually represents the post paying homage to the men who had died and went on ahead of us, for the sacrifices they’ve made,” said American Legion Post Commander Terry Perigo.

Perigo, who served as a sergeant in the U.S. Army, said the post lays out the wreath in a “Laying of the Wreath” ceremony and they leave it out for visitors and mourners during the day. They also conduct a similar ceremony at the Pierce St. John Cemetery, following the Pawhuska Cemetery event every year and serve a meal at the Wah-Zha-Zhi Cultural Center at noon.

Colonel Rex Duncan, who retires this month after serving for 34 years in the Oklahoma Army National Guard’s 45th Infantry Brigade Combat Team, spoke at the event.

“How many countries have never tasted freedom? How many countries have borders to keep their people in? How many people don’t have the freedom to gather in public – to speak their minds without fear of disappearing in the night? Or being dragged out into the street in broad daylight and being shot? … Our freedoms are unlimited and far beyond the imaginations of millions of people around the world,” Duncan said. “Who gave us these freedoms? The heroes we have gathered to honor, they paid with everything they had, nobody else has paid more.”

Ammons said her husband Larry contracted Agent Orange after serving in Vietnam. Doctor’s didn’t know what was wrong with him until they traced it back to the chemical in 2006. He later died from it.

“I’ve always been a loyal American, my two uncles served in World War II. Raymond Joseph Hill, he was in he U.S. Navy and Aloysius Vincent Hill, he was a paratrooper and he was in the 82nd and 101stAirborne – Screaming Eagles. He battled in the Battle of the Bulge and he was in Korea, he was a paratrooper all the way. He was a Ranger, which evolved into a Green Beret. He was a Native American and my grandmother Rose Hill was so proud of her boys serving in the armed forces.”

Her grandmother buried both her uncles after Raymond Hill died in a car accident and Aloysius Hill died from a heart attack. Ammons said Aloysius’ heart was weakened by his time as a paratrooper and her grandmother Rose, after having buried him and having a broken heart, died of a stroke two years later.

“I loved his (Duncan’s) speech, I thought it was on target, it was very moving, to remind us all that we have these freedoms because all these great men died,” she said. “So many Americans just take what our soldiers do for granted and it just breaks my heart.”

Duncan said while serving at the Bagram Air Field base in Afghanistan from 2011-2012, he saluted 110 heroes at ramp ceremonies. He watched as they were boarded onto planes in flag-covered caskets.

“We held those ramp ceremonies for our heroes as they were flown out of Afghanistan and back to America. Ramp ceremonies at Bagram were held for those killed in eastern Afghanistan, also an area where the 45th Infantry Brigade Combat Team also served,” he said. “Each ramp ceremony was a solemn reminder that a hero had paid the ultimate price, for fleeting freedom. Some ramp ceremonies were for two, three or even four heroes. The largest I attended was for 30 American heroes, including 22 Navy Seals, killed when their Chinook helicopter was shot down during a combat mission. Took six motorized cargo transports to move the caskets to waiting military pallbearers to their final walk into the C-17 aircraft.