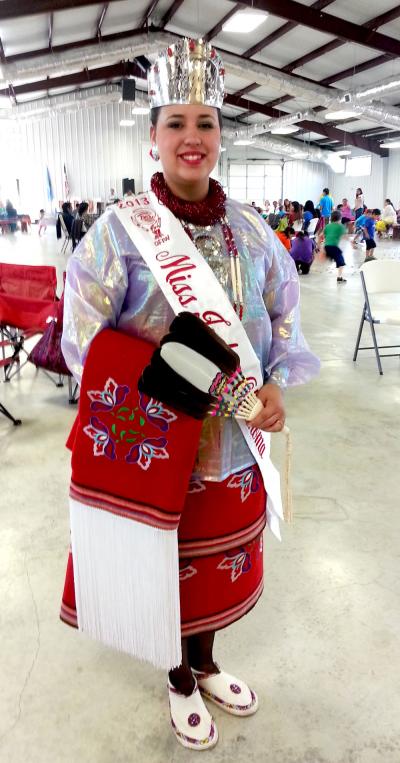 Robynn Rulo has always wanted to hold the title of Miss Indian Oklahoma. She’s already held five princess titles in her young life, with the coveted title awaiting her. And finally, in front of friends and family, she won.

The Oklahoma Federation of Indian Women crowned Rulo as the 2013-2014 Miss Indian Oklahoma May 4, at the Otoe Missouria First Council Hotel & Casino in Newkirk, Okla.

“It’s a really big title that I have always wanted to run for,” said Rulo, 20. “I didn’t even tell anyone I was running for Miss Indian Oklahoma until the week of.”

Rulo, who is Osage, Delaware, Shawnee and Quapaw, competed against 19-year-old Cherish Wilkerson, who represented the Choctaw Nation of Oklahoma.

“I was real shocked when I won because Cherish was pretty fluent in her language and sang a song for her talent,” Rulo said. “Also, we were both academically strong and on the same level.”

The pageant consisted of a 30-minute timed essay, a 10-minute interview, public speaking, talent portion, presentation of platform and an impromptu question.

For the talent portion Rulo said the Lord’s Prayer in Osage and her platform presentation was raising awareness on alcohol, drug and tobacco abuse.

“I had never done anything like this before,” Rulo admits. “It was stressful – luckily I had help from Caroline White and Claudia LittleAxe.”

“Caroline helped me with my introduction, timing my prayer and platform as well as putting my platform together,” she said. “Claudia helped me more so with the cultural aspects of the pageant.”

Nicole Walls, president of OFIW was very impressed by Rulo and her professionalism.

“She was very professional the entire time, very outgoing and very willing,” Walls said. “There wasn’t a chance she didn’t take to put herself out there.”

On the other hand, Rulo’s mother Dana Daylight admitted to being a nervous wreck.

“We had never done anything like that before,” Daylight said. “Plus, parents didn’t have contact with their children until after the pageant.

“Robynn looked great on stage and I was so worried, but there was nothing to be worried about because it was her on stage, not me,” she added.

Also, Daylight’s cell phone died early on in the pageant from the high volume of calls from family members and friends who couldn’t make it to the pageant.

Rulo did have about 30 family members and friends attend the pageant.

“The most exciting part was seeing all the support from my family and friends who came to watch the pageant,” Rulo said. “My sister and cousin even made signs that said ‘Go Robynn.’”

Rulo graduated from Pawhuska High School in 2011 and attends Northeastern Oklahoma A&M College in Miami, Okla. She serves as president of the American Indian Center for Excellence Advisory Club, treasurer of the Native American Student Association and is a member of the Phi Theta Kappa Honor Society.

She is a member of the Social Work Club and assisted with training of the female basketball team last year. Rulo is also a student member of the Internal Evaluation Team for NEO’s Title III grant.

She also served on a student panel for the Native American Student Transfer National Symposium in October and made the Dean’s Honor Roll.

In May 2014 she will be graduating with an associate’s degree in American Indian Studies. She wants to transfer to a four-year university, such as the University of Oklahoma, to study echo cardiology.

“I am so proud of her for doing this and showing not only her family but other girls that if you put your mind to something and follow through – you can persevere,” Daylight said.

“There are so many girls that look up to Miss Indian Oklahoma and for Robynn to hold that title at 20 years old is really great, ” added Walls.

Rulo will now be a dignitary of Oklahoma for the next year and attend various events around the country.

“The first big event will be Red Earth Powwow in Oklahoma City,” Rulo said. “I will also be head lady at IICOT (Powwow) in Tulsa this year.”

In November, Walls said there is a Native American Heritage Day celebration in Oklahoma City and Rulo will be reading the proclamation.

Rulo is excited for the next year and has set goals for herself as Miss Indian Oklahoma.

“I want to encourage kids to continue with their education and be supportive as well as continue my own education,” she said. “Also, I want to let people know they can live an alcohol and drug free life.”

OFIW believes Rulo will be a wonderful Miss Indian Oklahoma and they look forward to working with her.

“She seems really driven and responsible,” Walls said. “She has already attended events on her own and is taking that initiative to move forward.”

Rulo said she is still a little bit in shock to be holding such a big title but she couldn’t be happier.

“I feel humbled and honored to represent my family, my tribe and all the tribes of Oklahoma,” she said.