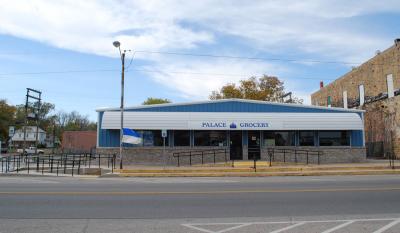 The Osage Nation is still entertaining prospects for the vacant Palace of the Osage grocery store in Fairfax after an interested party withdrew from negotiations with the Executive Branch.

In July 2012, the Osage Limited Liability Company transferred the building’s ownership back to the tribe after two prior efforts by the LLC and Barnsdall businessman Rick Parker to run the grocery store failed. Since then, the Executive Branch met with prospective businesspeople – with the most recent interested party backing out earlier this spring.

Raymond Lasley, Executive Branch adviser of programs, confirmed “folks that were interested in the store backed out,” on May 20. He said the unnamed party did not cite a reason for withdrawing, but believed “it was a lack of capitalization.”

The Palace grocery store update comes after Congressman William “Kugee” Supernaw mentioned the recent development in his April 14 Notes to the Nationemail newsletter.

Lasley also added: “The good news is that another individual is interested, we have met once at the store and we are trying to get together on another meeting to discuss terms.”

Last fall, the ON government branches also heard a proposed business plan from a group of Fairfax residents to run a grocery store in the building as a nonprofit entity. Joe Conner (Osage) presented the Four Winds grocery nonprofit plan to the Third ON Congress in September, which would be operated by him and area residents, including Osages Cecelia Tallchief and Mary Jo Webb.

The government branches did not take action on the plan after hearing it would cost $1.5 million to start the nonprofit, launch the store and to hire a professional grocer. Disappointed with the lack of government interest in the plan, several Fairfax area residents protested at the Congressional Chambers on the last day of the 2012 Tzi-Zho Session. The Congress did not take further action on the plan afterward and the Executive Branch sought other interested parties for the store building.

The LLC acquired the Palace after launching in 2008, but sold the store to Rick Parker in 2010 amid money losses. Parker, who had money problems of his own and was delinquent on taxes owed to the Oklahoma Tax Commission, closed the Palace in late 2011 and the LLC began foreclosure proceedings against Parker. As part of the foreclosure process, the store was sold at a March 2012 auction with the LLC purchasing the building for more than $379,000.

Several members of the Fairfax community are looking to generate interest in a weekly Farmers Market at the Palace Grocery parking lot.

According to a flyer, the market will be held Saturdays, 8 a.m. to noon, starting June 1. Local farmers and vendors have been invited to set up tables and sell their products.

The Farmers Market will focus on offering these items:

The goal is to generate enough interest to make the Farmer’s Market a weekly event. Fairfax residents are urged to look for notices in the Fairfax Chief for upcoming market days.