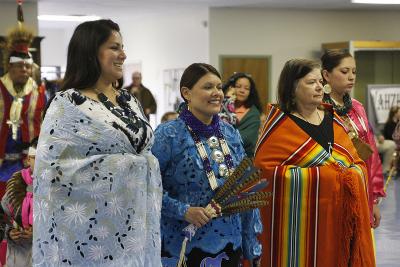 The Osage Tribal Museum celebrated its 75th anniversary with a two-day celebration on May 3-4.

“I think it went beautifully and I was pleased with the turn out,” said Kathryn Red Corn, director of the Osage Tribal Museum. “Everything fell into place – the weather was a damper but it didn’t stop people or the celebration.”

“We looked at the first event that was held 75 years ago and I wanted to follow it,” she said. “We had pamphlets, videos and pictures from 1938 that we went through in preparation for the celebration.”

The museum was originally constructed in 1872. It was originally used as a chapel, school and a two-story dormitory structure with an auditorium. In 1937, it was remodeled as a one-story building and museum.

On May 2, 1938, the Osage Tribal Council dedicated the museum where they were able to house the John Bird art collection, that consisted of more than 100 pieces, according to the museum’s website.

Mathews, Labadie and Petsemoie were asked to oversee the construction of the museum by Lookout, which was a Works Progress Administration grant sponsored by the Osage Tribal Council. Lillian Mathews was the museum’s first curator.

It is the oldest tribally owned museum, according to the museum’s website.

The museum kick-started the celebration with Osage Ancestral Paths: Keepers of the Treasures Symposium at the Constantine Theatre on May 3. There were eight guest speakers who covered topics such as symbolism of Osage rock art, the Ohio River Valley and Osage mounds.

“The symposium was my favorite event,” said Sandra Jamison (Osage). “There was a lot of history shared about the Osage people and I found the discussion on the rock art very interesting.”

Jamison, a contract worker for the museum, said the celebration allowed her to relearn about the Osage history, since she had lived outside Osage County for nearly 40 years.

Following the symposium, the Bigheart Reception to honor the, “Wahzhazhe: An Osage Ballet,” took place at the Wah-Zha-Zhi Cultural Center.

“One thing I wanted us to do was honor the ballet since it told our story from the beginning to now,” Red Corn said. “So we honored those people who made the ballet happen.”

Furthermore, the museum held a screening of the ballet at the Constantine Theatre that evening.

“We had different people at each event,” Red Corn said. “We even had people as far as New York City and San Francisco who came.”

On May 4, the museum held a parade in downtown Pawhuska called, "To Beat The Drum."

“I tried to have as many things the original parade had, like a color guard, a band, the Osage Nation Chief, horse-drawn carriages and wagon, and children,” Red Corn said. “The only thing we couldn’t get for the parade was a 1930s car.”

Red Corn had Kristen Pratt (Osage) ride in the parade dressed in an Osage wedding coat and hat. ON Congressman, Archie Mason was the emcee for the parade.

After the parade, the museum had a Diamond Jubilee Picnic, followed by a dance.

“At the dance we didn’t have giveaways, or anyone talking, it was just a dance,” Red Corn said.

Also, there was a Native American art show and sale, as well as an Osage flute making demonstration.

“I thought it was really neat how he made it and shared the history about it,” said Elsberry, the museum’s videographer and archive assistant.

Spectators were also able to tour the museum, visit with staff and sign the 2006 Osage Constitution that is on display in the east room.

“I’d like to congratulate the museum on its 75th year of operation,” said Osage Nation Principal Chief John Red Eagle. “I applaud the efforts of director Kathryn Red Corn and her staff in organizing this two-day celebration – we hope that everyone will plan to visit the museum to see all of the impressive exhibits on display there.”