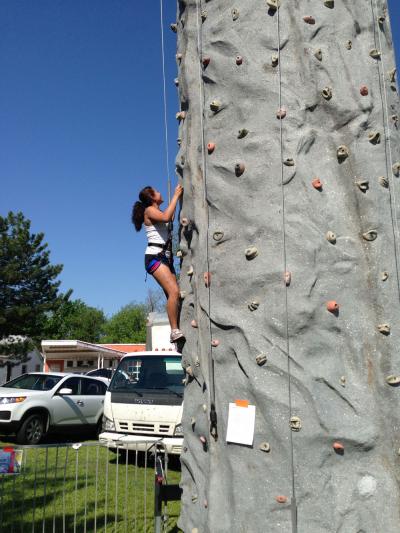 ON health departments working toward a healthier Osage Nation

The Osage Nation’s health and wellness programs launched its first-ever Amazing Race event on May 11 with 120 people registering for the day’s running events held to raise awareness and combat poor health practices.

Runners and their families gathered at the starting line in Pawhuska’s Cultural Park to participate in the “5K Run For The Health Of It” and the “Osage Nation Amazing Race.” The running path took runners and joggers, of all ages, north from the park at Main Street and Lynn Avenue to the pedestrian/bike path heading toward Pawhuska Indian Village then back south to the finish line at the park.

ON Communities of Excellence hosted the event in collaboration with other departments including the Prevention Program, Counseling Center, Treatment Alternative to Street Crime, Primary Residential Treatment (PRT) and Clinical/Medical Services. According to a news release, the event is being held in response to record numbers indicating poor health and poor health practices in Oklahoma and specifically Osage County.

“It’s an overall health initiative the tribe is putting on and we want to set the example on being proactive,” Gail Boe, director for ON Communities of Excellence, said in the release. Boe’s department focuses on issues causing chronic disease through educating the public on healthy food choices, exercise and smoking cessation.

Boe said 80 of the 120 run event participants completed the 5K run which stretches 3.1 miles. The day’s other exercise-focused events also included the “Littlest Amazing Race” for youth and family fun day activities for the attendees in the park such as wall climbing and an inflatable house for jumping.

Citing health studies, the Communities of Excellence notes Oklahoma ranks high in the nation for poor health factors including smoking and obesity. For example, the United Health Foundation issued the following 2012 health statistics for Oklahoma on its Web site:

The 5K run was an annual event from 2008 to 2010 and dropped out in 2011 and 2012, the release stated. See Osage News photos from the race events on the newspaper’s Flickr Web site at: www.flickr.com/photos/osagenews/sets

For more information on the ON Communities of Excellence and its services, call the office at (918) 287-5267 or visit its Web page at www.osagetribe.com/communities