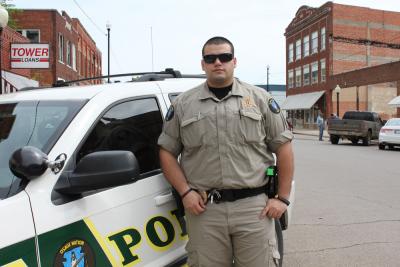 Streets, a former firefighter for the Bureau of Indian Affairs and the Forest Service, is from Barnsdall. He was a firefighter in Miami, Okla., Pawhuska and the Land Between The Lakes national recreational area in Kentucky.

Streets has always wanted to work in law enforcement and when he worked in Pawhuska he had the chance to get to know ONPD.

“I first started talking to (ONPD) Lieutenant Marchy BigEagle and he explained what I had to get my foot in the door,” Streets said.

While he was in Kentucky, Streets took it upon himself to go on ride-alongs at night with the local law enforcement to get a taste of what they do. It didn’t take Streets long to decide that he wanted to pursue becoming a police officer.

“I come from six straight generations of law enforcement in the Osage,” Streets said. “My great-great-great grandfather came from Georgia and was a marshal in Oklahoma –he was the first law enforcement officer in my family.”

Streets, 25, admitted he waited a while before he applied since he wanted people to take him seriously. With that said he stuck his neck out there and ONPD hired him.

Osage Nation Chief of Police Nick Williams said he hired Streets because he’s active with his Cherokee heritage and comes from a family background of law enforcement.

“I like it a lot,” said Streets. “I like the guys and it is a little different being on this side of the law enforcement, but in a good way.”

Mitchell on the other hand, is a returning ON Police Officer and is from the Grayhorse District. He first began working for ONPD in 1996 at the age of 21.

“I started with ONPD that spring as an officer and was one of four original members in the department when the contract with the BIA was taken over by the tribe,” Mitchell said.

The original ONPD consisted of a Chief of Police, a lieutenant and two officers, he added.

In 1998, Mitchell was recruited by the BIA Law Enforcement and was hired by the Southern Pueblos Agency in Albuquerque.

“During this assignment, I acquired the position of Special Agent and began to investigate violent felony crimes for prosecution in the Federal Court System,” Mitchell said. “Although I investigated numerous crimes, my emphasis was on child sexual abuse investigations.”

From 1998 to 2004, Mitchell worked on short assignments in other areas of law enforcement. For example, following September 11 he volunteered to take an assignment for six months as a Federal Air Marshal. He assisted with providing security for passenger airlines throughout the U.S.

In 2004, he transferred to the BIA Mescalero Apache Agency in southern New Mexico as a Special Agent to the BIA and soon became Chief of Police.

“While managing a full service law enforcement agency, I worked extensively with several community groups including the local Boys and Girls clubs, promoting the involvement of the police in positive situations with the community and especially the children,” he said. “During this time, I learned a great deal and strengthened my skills as a promoter of community policing, or as I would prefer to call, community involvement.”

Mitchell served as Chief of Police for the Mescalero Community for eight years before he returned home to Oklahoma in December.

“I sought re-employment with the new and improved ONPD because of my desire to continue my law enforcement career here at home and most importantly, the opportunity to share what I have learned doing community policing during my assignment to the Mescalero Agency,” he said.

Not to mention, Oklahoma is Mitchell’s home and where he feels he belongs.

“He wanted to come back home and with his extensive background and knowledge he was a good fit for our team and home,” Williams said.

He hopes that through his experiences he can bring fresh, new ideas to ONPD that will help improve the quality of life for the Osage people.

Mitchell has also won numerous awards and accommodations for his service. He is particularly proud of having received the Valor Award for the National Native American Law Enforcement Association. He was awarded for his efforts in coordinating and assisting in the rescue of 198 people from a flood in the Mescalero Community.

“In the brief time I have been back, I have enjoyed working for the ONPD because of the camaraderie and support amongst the department and other tribal programs,” said Mitchell.

ONPD now has 19 active police officers including Chief of Police and one officer who is employed by the Osage Nation Attorney General’s Office.

“We are budgeted for one more officer,” Williams said.

Williams would like to hire ten more officers and is in the process of writing a grant. As well as talking with the Osage Nation Congress.