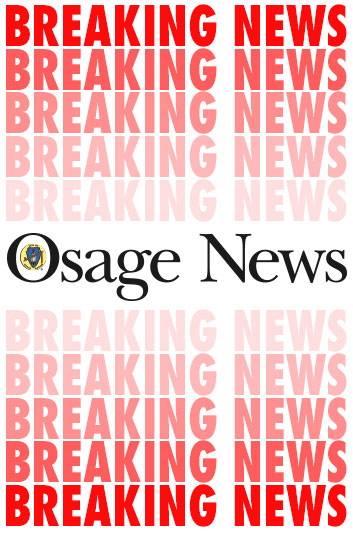 On June 18, the newspaper filed a court complaint requesting the ON Trial Court to compel the Chief to release a consultant contract to the newspaper, to pay a civil penalty for allegedly breaking the tribe’s open records law and to pay the newspaper’s attorney’s fees. The newspaper is being represented by Tulsa-based attorney Stephen Lee.

The newspaper’s court filing is the latest move in requesting the consultant contract between the Red Eagle administration and Rod Hartness, a pipeline consultant and professional steer roper.

“The Osage News has a duty to uphold its integrity and follow through with the laws set forth by the Osage Nation, even if its elected leaders do not. Principal Chief John Red Eagle failed to respond to an open records request we filed in January of this year,” said Osage News Editor Shannon Shaw Duty. “Our request was filed for a contract with Rod Hartness, a pipeline consultant.

“Our claim filed in the Osage Nation Trial Court is another step toward building a stronger Osage Nation, where laws are followed and people are held accountable for their actions.”

The Osage News asked Chief Red Eagle’s office for comment but did not receive a response.

ON Trial Court Chief Judge Marvin Stepson set a court hearing for July 11 at the tribal courthouse in Pawhuska.

On Jan. 31, Duty requested a copy of the Hartness contract from the Chief’s office in writing. The open records request occurred one day after Chief Red Eagle met with the ON Congressional commerce and economic development committee where the Chief said he hired Hartness as a pipeline consultant to update him on the industry. Hartness has also received sponsorships from Osage Casinos for his rodeo profession since 2011. Red Eagle also made headlines when he took Hartness on a business trip to the National Congress of American Indians conference in 2011 using Osage Nation funds. Hartness is non-Osage and was not employed by the Nation at the time.

During the Jan. 30 meeting, Red Eagle declined to say how much Hartness is being paid per the contract. Chief Red Eagle’s attorney Kirke Kickingbird, also present, told the newspaper it would have to file an open records request to get the information.

“Osage News has never received a response from the Chief’s Office regarding this request and it has been more than (35 days),” reads the newspaper’s court complaint. The complaint also cites the open records law which says: “In denying an Open Records Act Request, the government entity denying the request is required to do so in writing and comply with all criteria set forth in (the open records law).”

Violations of the open records law are considered civil violations and those found guilty of withholding public documents, or releasing protected documents containing privileged and confidential information, face monetary fines if convicted in tribal court. Those fines range from $1,000 to $5,000.

News of the Osage News lawsuit reached regional and national news outlets, and organizations reached out to the newspaper. The Native American Journalists Association’s President Rhonda LeValdo released a statement on the issue.

“NAJA supports free press in Indian Country and we encourage Tribal officials and administrations to work with their tribal media. A government that does not support free press is not serving its people,” wrote LeValdo. “We hope that the Osage tribal administration will understand the need for transparency and give the requested documents to the Osage News in order to provide that information to their people.”

In a separate case, the Third Osage Nation Congress subpoenaed the Hartness contract and any contracts the Nation entered into with Hartness during the past 12 months. The Congressional subpoena was issued by the Congressional commerce and economic development committee on March 13 to Treasurer Callie Catcher after a written request for the contract went unanswered.

Red Eagle and Catcher then challenged the Congressional subpoena by filing a motion to quash the subpoena in Trial Court where the case is pending.

This is also the second civil lawsuit filed in less than a week in tribal court against Red Eagle with Attorney General Jeff Jones filing an ethics complaint detailing two incidents involving the Chief. The Chief was given 20 days to respond to that complaint filed on June 12.