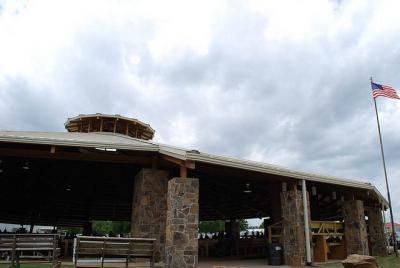 A recycling effort began at Grayhorse In-Lon-Schka and those involved want to continue the effort throughout the Nation.

Several volunteers from the Osage Nation Environmental and Natural Resources department conducted a recycling experiment at the Grayhose In-Lon-Schka dances this year, bringing their own recycling bins and transporting the bins themselves to various camps.

The effort began when ENR staff applied online to receive recycling bins which were delivered a week before Grayhorse. The red recycling bins have small holes at the top for depositing cans and bottles.

The volunteers transported the bins to Grayhorse and placed them at three camps to see if the recycling effort would get support. Those three camps pitched in and produced over six large bags of recycled materials, which were collected and transported to Tulsa Metropolitan Environmental Trust for recycling. MET operates 12 recycling centers. Typical materials deposited in recycling bins include water bottles, soda cans, large plastic bottles for cooking oil and iced tea, and plastic Silo cups.

“It was exciting to see the Grayhorse people contributing to this effort. It received overwhelming positive response and support. Many people stated that they had been interested in finding ways to recycle in past years and were glad to have the opportunity to contribute,” according to an ENR press release.

Overall the benefits of this effort include decreasing the trash output at the dances and reducing landfill waste. It also promotes sustainable use of natural resources when the waste materials can be re-purposed for other products, according to the release.

Plans for next year include expanding the effort to place and collect materials for more recycling bins during Grayhorse weekend.