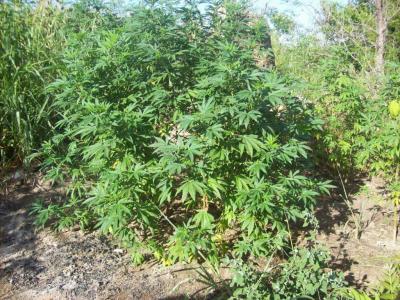 ONPD seizes $45,000 worth of marijuana in Fairfax

The Osage Nation Police Department destroyed $45,000 worth of marijuana plants that were growing in field a short distance from the Fairfax Elementary School.

ONPD has no suspects at this time.

“It wasn’t organized, it was like … I went back there and they were randomly scattered around in the area,” said ONPD Officer Patrick Luey who was called to the scene after a drug enforcement helicopter spotted the plants.

“When we got there it looked like someone had just been out there and watered the plants. There was a 5-gallon bucket and shovel out there,” Luey said. “The Osage Nation Wild land Firefighters came out. We escorted them out to a vacant field to have it burned and destroyed the next day.”

According to the police report, Luey was called by Osage County Dispatch around 6:30 p.m. Luey called an officer already in the area to visit the vacant lot located at Mulberry and Shaw streets. Luey contacted ON Chief of Police Nick Williams who confirmed the area was restricted land. Williams also came to the scene.

Williams said drug use is a problem in Fairfax, especially methamphetamine. So Williams and others were surprised when they were called for marijuana.

“We were surprised about the marijuana grow … there’s a lot more prevalence in meth than marijuana in the community. We know that marijuana is still a problem but it’s not as noticeable as the meth problem,” Williams said. “The meth problem is rampant in every area of Osage County.”

Luey and Williams were escorted through a thick patch of brush and high grass to the site. Luey said he recognized the plants immediately. The plants ranged in various sizes, from one foot to six feet tall. Luey took several photos of the site and he and others dug up the plants and placed them in a trash bag in Luey’s patrol vehicle.

Luey drove from Fairfax to Pawhuska with the plants crammed into the back of his patrol car. “Luckily we have those dark tinted windows and people can’t see,” he said laughing.

The plants were locked up and secured for the night. Since marijuana is not considered an emergency to the BIA, the plants were burned the next day in a controlled area, Luey said.

According to Lt. Marchmont “Marchy” Big Eagle, the BIA estimates the street value of each plant at $1,500. Thirty plants were seized for an estimated value of $45,000.

“If we did have more officers we would probably have set up a surveillance to watch. I don’t believe that’s the only field being grown in the area, that’s just one that’s been reported to us,” Williams said. “It would be great if we had additional officers so we could search and seize these crops.”