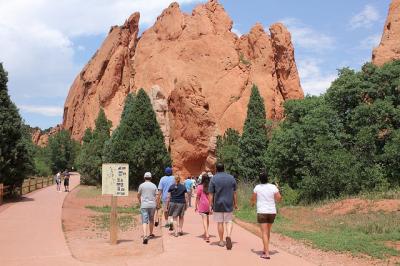 The Osage Nation Language Department took 70 Osages to Colorado Springs for four days to retrace the footsteps of their ancestors.

“Colorado has been quite a familiar place to go during vacation time for our people and I thought it would be a pretty good touch to go back there,” said Herman “Mogri” Lookout, Osage Nation Language Department director.

The group traveled 630 miles on a charter bus to Colorado Springs on July 10 and the immersion workshops began on July 11.

This year, ONLD and the Osage Nation Cultural Center teamed up to teach the workshops. The workshop topics included history of Osages traveling to Colorado Springs, In-Lon-Schka dances, Osage clothing and how to score a hand game.

Lookout and Wah-Zha-Zhi Cultural Center Director, Vann Bighorse, have been trying to partner the Osage language and culture together.

On July 12, ON Education Division Leader, Joe Tillman organized a unique roundtable conversation in Osage with nine people. The nine individuals were Lookout, Tracey Moore, Cherie Leach, Scott Lohah, Cameron Pratt, Mary Bighorse, Vann Bighorse, Bill Lynn and Ed Shaw.
“I thought of the idea on a whim and I felt it would be good for other Osages to see,” Tillman said. “I remember my great-grandparents speaking Osage and there was a lot of laughter –at the roundtable they began laughing which was good to see.”

For Mary Brown, ON Archive Department director, she was touched by the roundtable conversation.

“It was truly amazing and I hope to engage in Osage-only conversations in the near future,” she said.

The ONLD first made the trip to Colorado Spring in 2005 and took 32 Osages.

“We didn’t have very much of a curriculum, “ Lookout said. “We just wanted to break the ice, get together and acquaint ourselves with where our ancestors use to go.”

The ONLD took four trips with the last being in 2009. Lookout said ONLD stopped going because they were having a lot of difficulty with the Osage Nation Government.

“It was beginning to be a hassle to go out there and keep explaining,” he said. “They (ON Government) couldn’t grasp it because it looked like a vacation to them … to me we had people in an environment of togetherness for four days.”

After three years, Lookout decided to organize a trip to Colorado Springs with help from other ON departments and the ON Congress.

“I think the trip went better than I thought because in the years past it was always language immersion but this year since they have combined six programs into a division, the different programs helped us because we were short on funds,” Lookout said.

For some Osages, it was their first time to Colorado while others enjoyed feeling the cool mountain breeze again. The diverse group included Osage Language students, ON employees and a group of 20 children.

On top of the workshops, the group was able to visit Garden Of The Gods, Manitou Cliff Dwellings and Manitou Springs.

In the evening, the ON Cultural Center provided cultural games and activities such as Indian dice. The children played various games in Osage like, “Duck, Duck, Goose” and “Red Light, Green Light.”

The ON Cultural Center also provided shawl material and mini-lessons on how to make a shawl.

“We wanted to give people the opportunity to forget about what is going on here in Oklahoma and let them focus on the language and culture up there (Colorado Springs),” said Bighorse.

For Brown, this was her first time attending the immersion workshop and she is glad she took the opportunity to attend.

“During this trip several people helped me better understand the Orthography symbols for Osage words and pronounce words, as I am still in the early stages of learning the Osage language which is not an easy language to learn,” she said.

Brown also enjoyed all the knowledge she gained from the workshops and even learned that Lookout is her relative.

“Overall, without this opportunity I would not have gained this wonderful, spiritual and educational experience,” Brown said. “I look forward to the next trip.”

Through the Colorado Immersion Workshop and the Osage language classes, Lookout’s goal is to start producing fluent Osage speakers as well as educate Osages about the Osage culture.

“We are trying to make a good understanding of what we do in our In-Lon-Schka, what we do in our meetings, how we do our hand games, and be more closer to activates we do as culture-minded people,” said Lookout.

The ONLD plans to go to Colorado Springs next year and has already put it in their budget.