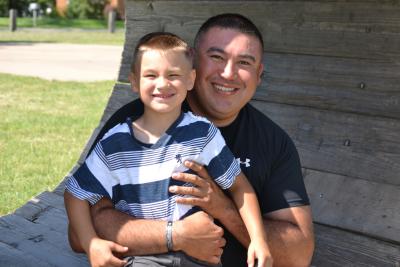 Native father quits chew for son and for health

Father’s Day is a national holiday and an American tradition, celebrating the paternal bond between father’s and their children. In recognition of that bond, the Osage Nation Communities of Excellence tobacco prevention program began a tobacco-free fatherhood campaign.

“We really wanted to get a message to the Native American fathers, really all the fathers we can reach, in our community who use tobacco that, your children see what you do and eventually do the same things. So why not model responsible, healthy behavior. Everyone wants what’s best for their kids and if quitting chew or quitting smoking is best then set a date to quit … there’s free help out there,” said Gail Boe, director.

On a slightly warm June day, Lance Jensen, 35, and his son Dane, 4, walk together to the playground at William’s Park in Pawhuska, Okla. Dane watches his dad for clues on what to do and maintains a safe proximity to his father, finally making his way to his dad’s side to sit next to him on a park bench.

Jensen is from the Omaha and Sioux Nations and a Pawhuska native. He has been tobacco free for more than a year. It’s quite the feat, especially for someone who started chewing tobacco at the age of 12.

“Some friends had some snuff, probably Copenhagen or Skoal. And then, I just used off and on all through high school. Everyone dipped back then.”

Jensen said his high school friends were predominately athletes and all the athletes dipped because smoking could slow a person down and access to dip was easy to come by. “We used to just go to the smoke shops and buy it … we were only 14, 15, 16. (Retailers) never asked any questions, just sold it to us.” Jensen lived in Pine Ridge, SD, as a teen and said he was shocked when he saw the teen girls from South Dakota dipping too.

He watches Dane play as he describes his hands-on approach to fatherhood, trying his best to be there for his son despite living in different towns. Jensen works as a patrolman for the Claremore Police Department in Claremore, Okla. “I try to spend as much time with him as I can, as much time is possible. When I have him I don’t let him just sit in front of the T.V. and watch cartoons. I try not to let him watch any T.V. We go outside a lot and play, go fishing. I take him shooting so he can meet my friends and learn … we go fishing a lot, almost three times a week.”

The smile grows on Jensen’s face as he describes with pride the way his son can cast a line on his own.

“What are you always asking me to do,” Jensen asks his son. “Go fishing,” his son answers shyly.

“Fathers are responsible for their children’s health too, and all the habits they grow into, whether by watching them or watching others, and seeing that their parents don’t smoke, chew, or live overly sedentary lifestyles,” said Boe.

Before quitting, Jensen said his son would mimic his chewing tobacco behavior by wanting to spit in his dad’s spit cup.  A spit cup is the cup chew tobacco users use to catch the residual excess saliva and tobacco mixture that builds up when chewing. Jensen said not having the spit cups around anymore is a bonus to no longer chewing, as well as no longer having occasional mouth sores.

Bonding with his son and quitting chew tobacco are decisions Jensen made in order to be healthier for his son.

“I just want to be the type of dad I think a father should be and do the things I think a father should do with his son. Change that role as far as what I experienced growing up. I remember my friends talking about going hunting and fishing with their dads and I always wanted my dad to do these things with me. But it just wasn’t his way, he always made sure I had what I needed but we didn’t do things together,” Jensen said.

“My mom had cancer, not related to smoking, gallbladder cancer, and watching her when she started going downhill, I thought, it’s not worth the risk … and then I thought about my son,” said Jensen about his motivation to quit.

Jensen said that he had tried to quit once before, more than five years ago, and that the stresses of his job caused him to relapse. When he quit this time he resolved to not do that. “I’m the kind of guy that when I make up my mind about something, that’s it.”

“I’m not saying it wasn’t hard, it was hard to quit and I would get cravings that would just hit me. I still do, but it’s not worth it to go back to (chewing tobacco),” said Jensen.

“I want to set the example for my son to follow, to be everything he can be. As his father I have to give him something to emulate,” Jensen said.

For more information about secondhand smoke, quitting smoking or quitting chewing tobacco, contact the Osage Nation Communities of Excellence at (918) 287-5267, or the Oklahoma Tobacco Helpline 1-800-QUIT-NOW, or visitwww.osagetribe.com/excellence, www.keepitsacred.org,www.ok.gov/stopswithme, www.breatheasyok.com.