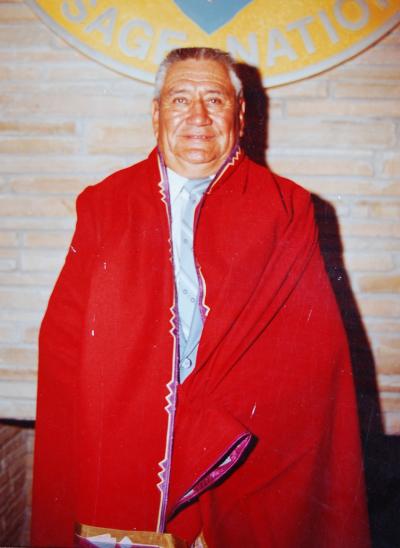 George Eves Tall Chief, former Chief of the Osage Nation, crossed over into the spirit world on August 11, 2013, at the age of 96. During his eight years in office from 1982 to 1990, Tall Chief was one of the first chiefs inducted into the “National Native American Hall of Fame,” and was the recipient of the esteemed “Peace Chief Award.”

After two terms as Chief, Tall Chief was elected President of the first Osage National Council, a newly formed governing body of the tribe. Throughout his nearly century-long life, Tall Chief was a professional cowboy, boxer, football player, teacher, coach, and high school principal and superintendent, before being elected Chief of the Osage Nation.

Tall Chief was born in 1916 in Ark City, KS, the oldest of five sons to Eves and Rose Tall Chief. He and his brothers were raised outside of Fairfax, OK. After the passing of his father when he was nine years old, Tall Chief and his four brothers were sent to Kemper Military School. He returned home to Fairfax when he was a sophomore in high school.

Tall Chief earned a football scholarship to Northeastern A&M in Miami, OK, and was a Golden Glove boxing champion two years in a row during college. He transferred from Northeastern to Central State University in Edmond, OK, where he met and married Marion Russell, with whom he had two children, Tim and Jan Tall Chief. He rode bulls for many years around the country, both during and after college. As a member of the National Appaloosa Horse Club, Tall Chief won numerous world championships in a variety of show classes.

After Tall Chief received his degree in education, he taught history and coached sports at numerous high schools throughout Oklahoma during the 1950s. Tall Chief moved to Colorado in the 1960s where he met his second wife, Vadyn. They were married for 54 years and had one daughter together, Tana.

Tall Chief received his Master’s Degree in Education from Pacific University located in Forest Grove, OR, where he taught nutrition and physical education, and coached football, wrestling, and baseball. He served as a scout for the Baltimore Colts, and was the liaison officer between Pacific University and the Dallas Cowboys.

Throughout his more than 50 years in education, Tall Chief taught in Oregon and Idaho before accepting the superintendent position on the Fort Belknap reservation.  During his six years as superintendent, Tall Chief helped the Assinaboine Tribe secure $5.5 million to start up their first charter schools.

Tall Chief returned to Oklahoma in 1978 and served as principal of Crescent High School for two years, after which he returned to his hometown Fairfax where he taught history and coached football before being elected Chief of the Osage Nation in 1982.

Tall Chief was a committee member of the Grayhorse In-Lon-Schka. He will be greatly missed by his family and friends. Services will be held at Grayhorse Chapel in Fairfax, OK, on Saturday, August 24, 2013, at 10 a.m.