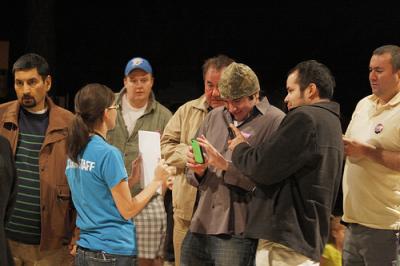 The 2014 Osage Nation Primary Election results have been certified with two Osage congressmen leading the way.

The Osage Nation Election Board unanimously certified the results on March 14 at their regularly scheduled meeting. If any candidate wishes to challenge the results of the election they have until 4:30 p.m. March 19 to ask for a recount.

Osage Congressman Geoffrey Standing Bear won the principal chief primary election with 1,080 votes or 60.47 percent of the votes. Osage businesswoman Margo Gray came in second with 359 votes, or 20.10 percent of the vote and finishing third was Tom Boone Jr. with a total of 347 votes or 19.43 percent.

The four primary election candidates who received the most votes in the March 10 election expressed thanks to the voters as they prepare for two more months of campaigning to win the June general election.

“I look forward to a spirited election, we’re in it to be successful,” Gray said after the unofficial results were announced. Despite the number of votes she earned in contrast to Standing Bear, Gray said she’s always appreciated the underdog position and will move forward with campaigning for June votes.

Gray said the Osage Nation’s future is at stake and voters will face the question of, “who can turn this Nation around?”

Red Corn thanked his supporters because, “without them, these results would not be possible.” He said he was “pleased” with the results, noting he originally set himself a goal of earning 40 percent of the primary vote.

Red Corn said he will keep course on campaigning with a “working hard” ethic.

Standing Bear said he appreciated all those who voted and encouraged more Osages to take advantage of the opportunity to vote.

Standing Bear said: “The level of support is both humbling and encouraging. We must return to the path of putting our Osage people first in everything we do at the Osage Nation government and at its enterprises. We need to see this as the priority in contracts, employment, health care, and every program and at every board and commission.”

Proctor said the primary election was, “bittersweet because my mother (who recently passed away) worked hard for me on my other campaign,” when she first ran for Assistant Principal Chief in 2010.

“I am appreciative of everyone that encouraged and supported me to this point,” Proctor said, adding, “We need to put forth more effort” in informing Osages of the importance of voting.

[Editor’s Note: The voter statistics in this story do not include 215 voters who participated in the voter privacy program in the 2012 General Election.]

From the list obtained by the election office, which doesn’t include 215 voters who participated in the voter privacy program, there were 1,040 in-person voters and 869 absentee voters for a total of 1,909 votes on the list.

Analyzing the in-person voter list by town, Osages from 62 towns in Oklahoma traveled to vote on Election Day in 2012. The towns with 10 or more votes on the list were:

The nine towns above, including the three traditional Osage districts, counted for more than half the in-person vote for a total of 827 votes. More than 44 towns had less than five votes, with 26 of those towns having only one vote.

The states with more than 20 absentee votes are listed below: