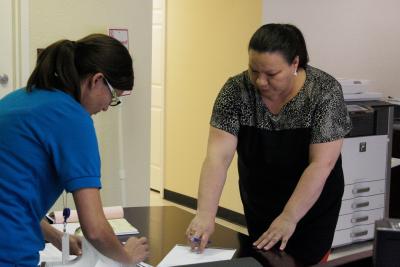 As of March 20, six Osages have filed for candidacy in the Congressional race and two have filed to run for the Osage Minerals Council.

Alice Buffalohead was the first to file for Congress on March 14. She is seeking her second four-year term on the Congress.

Dr. Ron Shaw is the second person to file. Shaw is a former Osage News health columnist who previously served on the Nation’s Health Authority Board and the now-defunct Health Advisory Board.

Six Congressional seats are up for grabs in the Nation’s June 2 general election.

According to the ON Election Office, the following materials are required from those interested in running for Congress:

1. Cashier's check/ money order payable to Osage Nation Election Office. The filing fee is $300 for Congress. No personal checks or cash will be accepted.

The filing period for the Osage Minerals Council started March 19. All eight seats on the OMC also carry four-year terms.

Ray McClain is the first to file for the OMC race.

Curtis Bear is the second to file on March 19. He is seeking his second term on the OMC.

The OMC has opened its own election office in the Nation’s tribal government Election Office at 608 Kihekah where interested OMC candidates may file. The OMC election office will keep regular office hours (8 a.m. to 4:30 p.m.) until the June 2 election.

For more information, the Minerals Council Election Office can be reached at (918) 287-5288 or email MineralsElection@osagenation-nsn.gov.