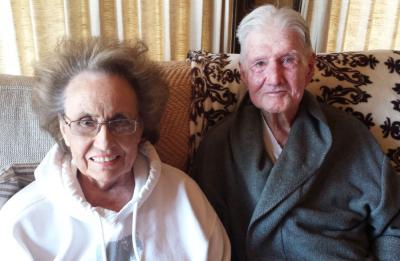 Mark Freeman Jr., 93, is still adding to his legacy. A man who made his name in the ranching business, who served on various boards and commissions in the state and later was elected to two-terms as an Osage congressman, is giving 9,000 acres of his ranch land to the Osage Nation.

“The deed is done, because my word is a deed. But we haven’t signed all those papers yet; it won’t take a lot. But they (Osage Nation) have the deeds on all the land and the papers, got our Osage lawyer, hopefully, reading those. So we’ll have it done in a businesslike manner,” Freeman said. “One of the deals was, I said I want my Osage people to pay for my Osage burial and feast afterward.”

The land transaction will take place within the next month, he said, and any taxes or fees associated with the land gift will be paid by the Nation.

“Mark Freeman is my uncle and in my direct bloodline and there are no words to express the feeling of gratitude for the 9,000 acre gift to the Osage Nation,” said Principal Chief Scott BigHorse. “His example of leadership, honesty, and generosity is something I pray all Osage people will grasp and follow.”

The 9,000 acres sits about 25 miles north of Pawhuska and runs north and south from the Kansas line. Currently named MF Ranch, the land brings in $15 an acre for an earning of $135,000 a year. He said about $27,000 needs to be set aside to maintain fences, springs, buildings and corrals on the land because, “anyone who has owned a ranch knows if you don’t do that, things go to fallin down.”

Freeman said he would like the land to stay called MF Ranch and that he would do his best to make sure the deal prohibited the Nation from selling the land as long as he could.

“Mark first mentioned his idea to make this gift to the Nation about 18 months ago, privately. He brought it up again in late January, and indicated he had taken certain steps necessary for the transfer. Some folk’s first reaction might be disbelief, but if you know Mark Freeman, Jr. and how he feels about the Osage Nation, it isn't that much of a surprise. It's a gift that makes a profound difference in our future,” said Osage Congressional Speaker Raymond Red Corn. “The transfer of the Freeman ranch represents a turning point in the history of the Osage Nation, and jump starts the repurchase of our reservation. Mark has shown us how it's done: a steady, logical purchase of property over time resulting in a large, contiguous holding. The best way we can thank him is to continue to follow his example and add to his legacy.”

For those who know Mark Freeman Jr., they know he can tell a good story.

His Osage heritage goes back to the Osage named Glah-Mo’n, which the French and English pronounced as Claremore. His daughter married a Frenchman in 1757 and their son was Freeman’s great grandfather.

His father was raised in Tennessee and his mother an Osage in Okla. He says he matured young and can still remember things from when he was three and four years old. He remembers his grandfather, Frank Lessert Jr., serving on the Osage Tribal Council from 1926-1934 and his parents driving his grandfather to and from council meetings. “He owned lots of cars but had his kids drive for him, it was another time.”

But the large headright payments didn’t last long. In 1932 he remembers his mother showing him her headright check and it was only $81 for three months. He vowed to never depend on headright checks as long as he lived.

He and his father worked hard and what little money they saved they invested in land.

“I had about 300 hens to take care of and get eggs from. I made a deal with my dad out of it and I added three little milk cows that were worth at that time about $15 a piece. He furnished the feed and I milked the cows, got the calves and raised the calves, so I started working young,” he said. “And as the 1930’s came along my dad had leased my mama’s land to a bigger ranch. Other than the 33 acres I was raised on by Ponca City, he and I together had bought 280 acres out there when I was about 15.”

He worked all through high school and saved up enough money to attend junior college in Tonkawa. He traded his truck for a Ford sedan and charged five other students $1.25 every week to take them to and from Tonkawa.

ark Freeman Jr. holds up a photo of when he was in the Marine Corps in his home on March 7, 2014. Shannon Shaw Duty/Osage News

After two years at junior college and one semester at the University of Oklahoma, he joined the U.S. Marine Corps in 1946 and was stationed in New Caledonia, a collection of islands belonging to France, about 750 miles east of Australia. The story of how he obtained the money to buy his first piece of substantial property happened in New Caledonia during a game of craps.

“They had this crap game going on, I was never a crap shooter, I was always a poker player. I drank a little above my normal, and got to shootin craps and I just couldn’t lose,” he said with a chuckle. “When I woke up the next morning, I had won all the money, about $6,600. In my Marine Corps pants you just have two pants pockets and two shirt pockets, and my little hat – they were all full of money. You couldn’t send it home, because it was crap shooting. You could only send home what you drew from the government as your check. So I carried that around until I came home. And I made two trips down to Australia and four trips to New Zealand and still kept it in my pocket.

“Anyway, that’s what I bought my first land with, 400 acres south of Ponca country. That’s where I started my ranching career after war. I’ve had an interesting life.”

It was this land and his mother’s allotment land, a total of 668 acres, he gave to his 7 children, he said. To his 27 grandchildren he gave $33,000 each and with the gift to the Nation, he feels he has taken care of what assets he has left and will enjoy the rest of his days with his nearly 50 great-grandchildren.

“I watched this thing running (tribal council) and proved myself a liar and ran for the council and I ran with my mouth open saying that I wanted to get us a true Osage government,” he said. “The council was never an Osage government. They could only make resolutions and if the BIA [Bureau of Indian Affairs] says no, that was it.”

“There were a lot of people responsible for the change in our form of government, but in my mind it will always be Mark Freeman that led the effort,” said Red Corn, who also served on the First Osage Nation Congress. “His no-nonsense style and penchant for concise statements led to a law less than one page in length, a limit he personally set.”

Freeman expressed he was pleased with the new government and the Second and Third Osage Nation Congresses. He had been working on the land gift with Red Corn and Osage Congressman Geoffrey Standing Bear for some time and is ready to close the transaction.