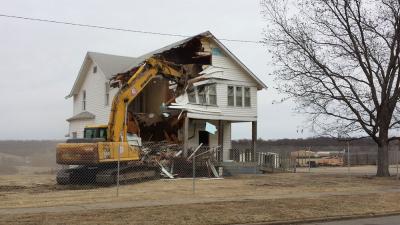 The two-story house the Primary Residential Treatment (PRT) program was housed in was the second building razed as construction of the Osage Nation Campus Master plan gets underway.

The PRT was a haven for many going through recovery. The 45-day program for people seeking treatment for addiction are offered Alcohol and Drug Education cultural principles, individual and group therapy, recreational therapy, life skills, education, Twelve Step Groups and traditional activities. The program also hosts a weekly sweat lodge meeting and Osages took to Facebook to express their views on the razing of the building and the grounds they had their sweat lodge ceremonies.

One such Osage was Ross Mashunkashey, who is a staff member of the PRT program and often posts uplifting messages of hope and recovery from addiction to his Facebook page.

“A new beginning- A sad day, but it marks the beginning of a new start. One of the many lessons I learned in this place was that interest to move forward, I must change everything. I must learn to adapt. This place was a gateway to a new life for many of us in recovery and I'm glad I get to continue on and help carry that message in a new home. Washka.#recovery #prt #osagetribe,” he wrote.

The PENTA Building Group has been selected as the construction manager at risk for the phase-one development of the campus.

According to a prepared release, the project scope includes demolishing existing structures and constructing two new office buildings, new site utilities, parking and infrastructure. The new buildings will include a two-story, 27,000-square-foot welcome center featuring a partial subsurface basement. The welcome center will house several departments, including constituent services, the Osage Nation Certificate of Degree of Indian Blood Department, tax commission, Osage News, human resources, and the Office of Strategic Planning and Grants Management. An additional 19,000-square-foot office building will be home to the police, emergency management, ON Attorney General and treasury departments.

The project began in February and has a projected 14-month construction timeline. PENTA expects the project to create approximately 300 jobs in the area.

“We are honored to have been selected by the Osage Nation as the project’s construction manager, and we look forward to playing a role in this exciting transformation,” said Joel Delia, project executive for The PENTA Building Group. “Our focus is to complete the project according to schedule, while maintaining PENTA’s high standard of safety and quality.”

The first building to be razed was the old golf house, which housed the ON Roads Department. The Roads Department is now located on Main Street in downtown Pawhuska, across from the ON Tax Commission.

The PRT program moved next door to a nearly identical two-story white house on Grandview street, where the Nation’s TASC program used to be housed. TASC is now located in downtown Pawhuska on 606 Kihekah street, next door to the ON Election Office.

According to a prepared release, the PENTA Building Group is a nationally recognized general contractor with offices in Las Vegas, Reno, Phoenix, Los Angeles, Palm Desert and Tulsa. As a general contractor, construction manager and concrete subcontractor, the company partners with every member of the development, design and construction team to build a variety of projects ranging in size and scope.

The success and experience of PENTA spans a wide variety of market segments including hospitality/entertainment, gaming, education, healthcare, Native American, retail/tenant improvements, commercial, industrial, public works and parking structures, according to the release.

PENTA is ranked annually among the top 400 national general contracting firms by Engineering News Record and is the recipient of countless project awards.

PENTA is privately held company possessing an impressive financial statement, bonding capacity and a commendable safety record. For more information, visit www.pentabldggroup.com or contact Jennie Bowman at 702-614-1678 or by email at jbowman@pentabldggroup.com.