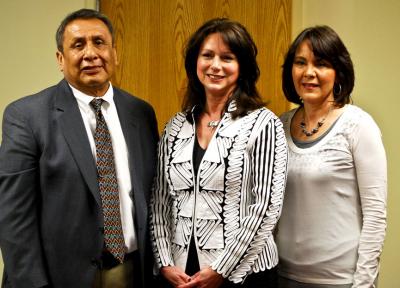 ON Election Board approves ballot for June 2 general election

The Osage Nation Election Board has approved the ballot for the June 2 general election.

The Election Board approved the ballot following an April 15 meeting, which included a random drawing to determine the order in which the candidates’ names will appear on the single-page ballot.

That morning, the board held the drawing at the Wah-Zha-Zhi Cultural Center, which included an informational meeting for the candidates regarding the election and candidate rules. About 18 candidates attended the meeting that touched on campaign contribution report rules and deadlines.

Election Supervisor Alexis Rencountre drew the candidate names one-by-one that were written on pieces of paper and mixed in a clear plastic hopper.

Also at the meeting, election board chairwoman Shannon Lockett said newly-named board member Anita Fields will recuse herself from involvement with the June 2 general election to avoid a conflict of interest because she has a sibling running for Congress.

Fields is a sister to candidate Rick Luttrell and previously served as an alternate election board member. She was asked to sit on the board after Walter Hopper resigned as chairman on April 7. According to board member Shannon Lockett, Hopper's wife recently retired and it is their wish to travel and enjoy their retirement.

"We appreciate his years of service and dedication," Lockett said. "He's done more than we can ever tell for this board and we're going to miss him."

Rencountre said Fields will start serving on the board once the general election business is wrapped by Lockett and vice chairwoman Terry Hazen, which includes certifying the June 2 election results and taking action on the candidate campaign reports that all general election candidates are required to submit.

Fields also did volunteer work during the 2012 election, Lockett said. The Second ON Congress confirmed Fields as an alternate board member in March 2012.

The candidate order is:

Check back to www.osagenews.org for updates on candidate and election-related news.