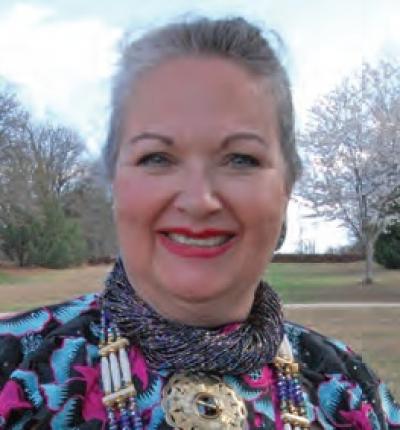 My name is Cheryl Potts, and I am asking for your consideration of this information for a seat on the 2014 Minerals Council.

My Osage lineage is through my father, Arthur Lee Potts.  His mother, Frances Marie “Fannie” (Rogers, Potts) Roberts, and grandmother Agnes (Drum) Rogers (We-he), a full-blood Osage original allottee #268, were from the Grayhorse district. His father, Lawrence Richard “Snooks” Potts, was Cherokee, and Walter Rogers was Narragansett. Agnes was the youngest of six children from mother, Mary (Gray) Drum (Ne-ah-to-we) who died prior to allotment, and father, Charles Drum (Wah-tsa-ki-he-kah), full-blood Osage original allottee # 267. Agnes had a younger half-brother, Charles Drum, Jr.,  from her father’s second marriage to a non-Osage, who relocated to California where his descendants remain connected with their Osage communities.  Agnes, daughter Fannie, and son Freddie still resided on their family homestead allotments west of Fairfax during my childhood, where my father, his brothers (Lawrence Jr., and Leroy) and sister (Laura Jane) were also raised. My grandmothers and my father taught me the importance of family, self-sufficiency and education.

I was raised in Sand Springs, and returned after college to raise my family. I have remained married to Stan Hall for 28 years and together we have 6 adult children, 12 grandchildren and 2 great-grandchildren.  My Osage children are Madison Potts (We-se-se-ta), Bentley Potts (Wa-tsa-moie), and Clayton “Eli” Potts (Ne-ka-to-he). All six children completed at least their Bachelor’s degree from universities in Oklahoma, and all have well-established careers.

My Bachelor’s degree in Sociology / Women’s Studies / Educational Psychology is from Yale University in New Haven, Connecticut. Twenty-five years later, I received my Master’s degree in  Clinical Social Work from the University of Oklahoma. I have been employed with various social services agencies, tribal and state governments throughout my 35 year career. My business strengths are in oral and written presentation, research, decision-making and project management.  I have employment experience in negotiating contracts with state / federal / private sources for funding acquisition, and am proficient in developing / administering / evaluating program operations.  I was elected to the first Osage National Council of the Constitutional Reformation in 1994. Since that time and with the passing of my family members, I have become an Osage annuitant. I bring intelligence, professionalism, and leadership to my candidacy, and want to serve my fellow Osages

It is critical for each member of the minerals estate to exercise their birthright through their vote.  Every headright carries its same percentage weight, whether the annuitant’s vote is cast in person or through the absentee process. I humbly ask for your vote in this upcoming election. We need strong leaders who are willing to serve, and I want to serve you. I appreciate your consideration, and ask you to vote for #14 on the ballot to become your representative on the 2014 Osage Minerals Council.

The Council member who WILL