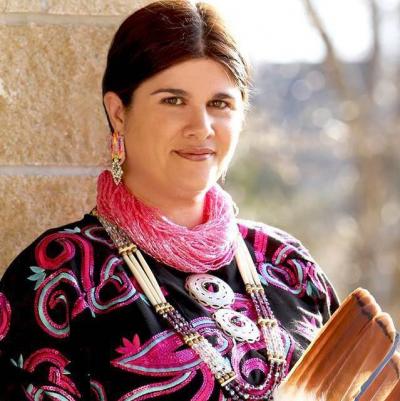 Assistant Chief candidate Amanda Proctor has filed an incident report with the Osage Nation Election Board protesting the process in which the ON Election Office handled the candidate campsite drawing for Election Day.

The election offices for the Osage Nation and Osage Minerals Council held a drawing May 14 for the campsites. The campsites will be located in the park area west of the ON Congressional Chambers on June 2. For the drawing, candidates were given a number that was placed in a hopper and drawn randomly. Once drawn, candidates selected the area of the park in which they will camp.

Proctor was not allowed to participate in the drawing, despite physically being there, because she did not turn in a completed form beforehand to the election office – a new requirement this year. The notice of the drawing and the form was mailed to each candidate by certified mail a week prior to the drawing. In the past, the ON Properties Department hosted the drawing and did not require a form. Proctor had camps in both 2010 and 2012 when she ran for assistant chief and the Osage Nation Congress.

Proctor complained she did not receive proper notice of the form because her 12-year-old son signed for the mail on May 10. She also took issue with the fact that other candidates did not receive their mailed information in time for the drawing and that one candidate (Everett Waller) was allowed to participate even though he did not submit a completed form. As a result, Proctor filed an incident report that was discussed by the ON Election Board at its May 20 meeting. Waller is running for the Osage Minerals Council.

At the meeting, the board discussed her complaint but also took the opportunity to respond to comments made by Proctor about the drawing incident on Facebook in the days after the drawing.

According to Proctor’s written incident report filed the same day of the drawing: “I drove to Pawhuska and was not permitted to participate in the drawing for a campsite. I did not receive notice. My 12-year-old son signed for the letter, which is not valid service under the law. Regardless, it was not courteous to prohibit the candidates who drove to Pawhuska today to participate, even if we had drawn last. I understand my uncle Galen Crum (an OMC candidate) received no notice, as did other candidates. These campsite drawing procedures are not in the established rules or regulations. They let other candidates draw who did not fill out the form.”

Nearly a week after the drawing, Proctor told the board she was still upset about the incident and was concerned that by not having a campsite it would impact the outcome of the election. Proctor is running against Raymond Red Corn. “Certified mail is not a good method of service for me, I work everyday in Jenks … there’s no way that I’m home during the day to intercept certified mail.”

Proctor said she was aware that Crum did not receive his mail in time for the drawing, but ON Election Board Chairwoman Shannon Lockett interrupted Proctor at that point and said they would not address other candidates’ business noting no other candidates filed complaints about the drawing.

Proctor then stated she was concerned about her campaign efforts being impacted considering the campsites are the last opportunities to connect with in-person voters when they cast ballots. “I worked very hard in recruiting absentee voters and for me, the election has two components. It has the absentee component and it has the walk-in component and the walk-in component, in my opinion … is driven in small part by the campsites, so for me this was a very, very important thing,” she said.

“I spent $10,000 probably, or better, getting to this point,” said Proctor, “this was a big deal to me and to be given just a couple of days turnaround time on something like this, to me, is not acceptable. And I’m very angry about it, I feel like this could alter the outcome of the election … I don’t understand why it would’ve been an imposition for me to draw after everyone else (drew), I took the day off of work … If I lose a day of work, I lose $1,000 or better.”

Despite not allowing Proctor to participate in the drawing, Rencountre advised the May 14 drawing attendees a second campsite drawing would be held at a later date for those candidates who weren’t present or (in Proctor’s case) allowed to draw numbers at the initial drawing.

Proctor said at the time she was unsure if she would participate in the second drawing, but noted all the campsites closest to the campus were taken and she was concerned about visibility to the voters who will visit the camps on Election Day.

Lockett countered Proctor’s complaint and noted Proctor’s $1,000 in fines for missing the campaign contribution report deadlines and not attending two candidate workshops held earlier this year for the primary and general election candidates showed a pattern. Lockett also referred to Facebook comments posted by Proctor and said some of them were “inflammatory.”

“I think it’s unfortunate because we seem to see a pattern of people going to Facebook to air their grievances which solves no problems,” said Lockett, “so if they have a problem, they really need to come to us, we’re willing to listen. Do you have anything else to add to that?”

Proctor said: “I don’t expect anything to change, I’m just upset about it. I guess I feel that it’s altered the results of the election and it was handled poorly and I believe if you want to send something by certified mail, you should also send a courtesy copy by regular mail or I’ll give you my business address.”

Lockett said: “You certainly could’ve done that if it’s a more convenient place for you to get your mail.” Lockett then said the campsite request form should’ve taken about five minutes to complete and said Proctor could’ve faxed or emailed a scanned completed form to the election office after opening the mail, “so I think four days notice for you was plenty.

“I’m sorry you sat through the whole (drawing), but you should’ve realized even before you got here that you weren’t going to be able to draw because that was stated in the letter. [Rencountre] announced she would do a second drawing because there were people [unlike you] who hadn’t received their notice,” said Lockett, before she started referring to printout copies of the Facebook posts written by Proctor after the May 14 drawing.

Lockett called some of Proctor’s comments inflammatory and a misrepresentation of the facts “and we don’t appreciate that, Amanda.” At that point, Proctor said, “OK, thank you very much,” and left the meeting.

Lockett and fellow board member Terry Hazen then motioned to hold an executive session with the board’s attorney ON Assistant Attorney General Clint Patterson.

Afterward, the board took no action on Proctor’s complaint noting the second camp site drawing had yet to happen and Proctor still had the opportunity to sign up for that drawing.

Patterson said: “You guys are not bound by the federal rules of civil procedure or the state law, state rules on civil procedure on notices and [Proctor] tried to argue that wasn’t proper notice, but those laws don’t apply to this procedure or your rules and regulations.”

Lockett also referred to one of Proctor’s Facebook posts that said: “My grievance hearing regarding the black ops campsite lottery will be Tuesday.” Lockett said: “First of all, this wasn’t a hearing, she had no basis for a hearing. This was just an opportunity that we granted to her to come before the board and give her side of the report … I think it’s ridiculous to think we have any control over who might sign for a registered letter or certified letter at her house.”

Regarding Everett Waller who was allowed to participate in the drawing, Rencountre said, “that is partially true,” and said the form for the campsite drawing was sent to a wrong address for Waller. She said it was the OMC Election Supervisor Faren Revard Anderson who made the choice to go ahead and let him participate “and I agreed it was the right thing to do since [Waller] didn’t even receive any notice whatsoever … he got like a few hours notice (of the drawing that day).”

On May 22, Rencountre said Proctor’s name was added to a campsite request form submitted by a Minerals Council candidate, which she did not name at the time. The second drawing for campsites is at 1 p.m., May 22.