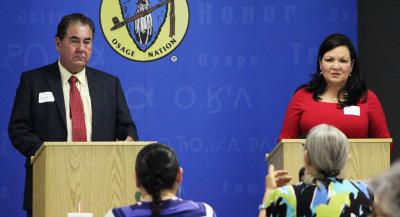 Margo Gray and Geoffrey Standing Bear, the two winners of the Osage Nation’s first primary election, faced off at the 2014 Osage News General Election Debates on May 3.

Standing Bear opened by touting his legal experience and experience as an Osage congressman. He said there was only so much he could do as a legislator for the tribe and he was ready to do more to increase the Nation’s land base and protect the Nation’s assets.

“After 34 years in the practice of law, I have determined to make sure history does not repeat itself,” he said. “I cannot sit idly by any longer.”

Gray said her long career in business management has prepared her to plan for the future and for good governance in the role of principal chief. She said she too wants the best for the Nation and has thought long and hard about making the decision to run.

“Taking this leap of faith … there’s going to be things I can agree on, and things I can’t … I want to represent the youngest to the oldest,” she said.

Question #1: Why did you run for Chief? Candy Thomas, Pawhuska

Gray said it came down to representing her people. She said she had become concerned for the tribe after years of watching. With her 35-plus years of experience she said she could see the tribe wasn’t doing well. She said she had done business with tribes that helped them become billion-dollar companies.

“Leadership, management, love of the people. I’m a mother, a grandmother and I want a better Osage Nation,” she said. “I’m very excited with what I bring to the table.”

“I grew up in the world of people telling stories of stealing headrights … 96 percent of our lands gone,” he said. “People who come here say they’re our friends and then they leave after they’ve taken millions.”

Question #2: The Osage Nation today has a number of “independent” governmental entities, including the Mineral’s Council, the Gaming Commission, and the business enterprises: how do you define the term “Independent” and what does that mean in terms of the Principle Chief’s relationship with such entities? Elizabeth Homer, Alexandria, Va.

Standing Bear said the Minerals Council is separate and the Nation stays out of their business. He said there are too many boards and commissions and they have developed into their own empire. He said millions are going in and there is no information on what is going out. To combat this, he said he favors a Super Board, a business model used by the Cherokee Nation.

“If elected, I’m going forward with the Super Board,” Standing Bear said. He also said in his rebuttal that he was very proud of the work the Osage Nation Water Rights Task Force had achieved (which he helped form and is chair) and noted that the task force is made up of officials from every branch of government and employees, including the ON Attorney General. They hold regular open meetings and he said if elected he would be using this model more as well, “Osages working together.”

Gray said it all came down to common sense and the boards and commissions are separate entities. She said communication would be her tactic for improving the business model of the Osage Nation. She said if there had been efficient communication the Nation could have prevented the $19 million in losses by the Osage LLC.

Question #3: What are your goals as a Nation on the Cobell buy-back program? Jodie Revard, Pawhuska

Gray said the Cobell Buy-Back Program was one of her goals for her administration. She said the Nation’s land base is 1.2 million acres and she was willing to do what it took to get land back and to possibly use it for tourism and business. She said during her business experiences she worked for one of the largest chain stores and she was tasked with finding best locations for economic development to put big box stores, so she has the experience to assess an area’s need for economic development.

“Buying back our land is a priority,” she said.

Standing Bear said the Nation is already behind other tribes in their efforts to utilize the Cobell Land Buy-Back Program and he said when he takes office he will remedy that. He said Osage Congressman William “Kugee” Supernaw is already leading efforts to set aside tribal money for land purchases. He said in working with the Nation’s water task force and the U.S. Geological Survey, he has already begun to research the Nation’s options in purchasing valuable land with ground water.

Question #4: If you were elected, how would your policies reflect a commitment to the environment, food sovereignty/tribal health, and/or tribal agriculture? Keir Johnson, Placerville, Calif.

Standing Bear said for years he served as trustee for Oklahoma’s Nature Conservancy and was apart of, and witnessed, when the Tallgrass Prairie and Bison Preserve came into effect.

“Look to what Congress has done – supporting AmeriCorps programs, we have raised garden beds in and around Pawhuska, the traditional seed bank in California,” he said.

Gray said she was a supporter of food sovereignty because she too had just planted her garden at her home and said when she went to St. Louis to celebrate the founding of the city she learned a great deal about Cahokia Mounds and that Osages were farmers.

“I’m a cancer survivor, heart patient, suffered a minor heart attack,” she said. “I participated in the Fun Run” that morning of the debate. Although she said she didn’t run or walk in the event she supported the event and handed out medals to the winners.

Question #5: What would be your top three legislative priorities if you were elected Chief? Elizabeth Homer, Alexandria, Va.

“We’ve got to do more for our health care … we’ve got people who need supplemental health care, good health care,” she said.

Standing Bear said his three top legislative priorities would be prioritizing a budget for the Nation and its programs, focusing on the Annual Plan of Gaming operations and making sure it turns in more money to the Nation’s treasury; and strengthening the laws to defend the Nation’s water rights.

“The water issue is so critical,” he said.

Standing Bear said a common misconception was that the Congress, the Chief’s office and the Minerals Council don’t speak, but in actuality they speak all the time – during water task force meetings. He said if elected that’s how his government would work; it would be a collaborative model to involve all the branches of government.

“That is Osages working together. You don’t hear whose turf is whose – that is the type of leadership I can provide.”

Gray said she would put Osages first and one of the first things she would do after getting elected would be to start listing what employees needed.

“Sometimes people just want to be heard … you don’t get things done by just [doing it yourself]. You do it by stabilizing the government, the business and I have done that,” she said.