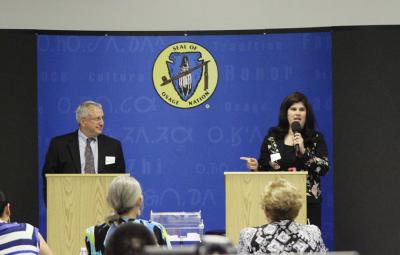 Proctor grew up in Wichita, Kans., and didn’t move to Oklahoma until 2003 when she began law school at the University of Tulsa. She had already achieved her bachelor’s in anthropology from Harvard University and worked two jobs as a tribal housing director. She said when she was at Harvard there was no school function for Native Americans and she helped begin Harvard’s first powwow. It is now in its 19th year and she has only missed it a few times.

“This is the first year in many years I’ve missed [Harvard Powwow], but I would not be anywhere else,” Proctor said.

Red Corn said he is going to focus on improving the performance of the Executive Branch and provide the natural bridge from the Executive to the Legislative branch through his role as assistant chief. He said serving as an Osage congressman for eight years, with two of those years serving as Speaker of the Congress, he knows the needs of the Nation and is prepared to work.

“I’m going to come early and I’m going to stay late. There’s a lot of heavy lifting that needs to be done,” he said.

If elected (Asst.) Chief, how do you intend to build employee morale to increase productivity among Osage Nation employees? Olivia Gray, Skiatook

Proctor said that leadership and productivity starts at the top and works its way down. She said the position of a tribal administrator or tribal department head is a very critical facet of the Nation and the chief and assistant chief need to put in the work to make sure these positions run smoothly and efficiently. She said she currently has 12 tribal clients and she has revamped policies and procedures for most of them.

“I’ll be fair, equitable, and fair at the administration of those properties,” she said.

Red Corn said he has sponsored the Fairness in the Workplace Act, Speak What’s On Your Mind Act and legislation to combat wrongful termination, all laws aimed at increasing employee morale and productivity. He said he was aware that there were policies and procedures that don’t exist in the Executive Branch but he’s going to work to remedy that. He said as Speaker of Congress and serving as Second Speaker for two years as well, he was in charge of the congressional staff.

“More importantly, we need to follow the policies we already have,” he said. “We need to take a deep breath and do what’s fair.”

Proctor said that Red Corn’s sponsored laws he mentioned actually chip away at the tribe’s sovereignty, even though he may have been acting in earnest to protect the tribe. “It’s laws like that that open the door for lawsuits.”

Red Corn said, “The workplace fairness act, it gives a channel for employees to get redress from the Nation … it opens a necessary channel for that to happen.”

Red Corn said his ideal role when interacting with congress would be communication. He said with the recent end of the 2014 Hun-Kah Session, Principal Chief Scott BigHorse vetoed six bills and pocket vetoed others. Red Corn said Congress was surprised because they had sat through numerous committee meetings with members of Chief BigHorse’s staff and Assistant Principal Chief Terry Mason Moore and nothing was said to indicate they opposed the laws.

Proctor said working with her 12 tribal clients she is often the legislative experience at the table, with tribal chairmans and other tribal leaders looking to her for recommendation. She said as assistant chief, she sees it as an expansion of a role she is already used to filling. She said she often writes legislation and policies for tribes, explains incredibly complicated matters to her clients.

“I’m at a tribal council meeting every week – this is what I do. I not only see myself as a communicator, but someone who can break down complicated issues.”

“Eight years in congress, two years as Speaker, this [government] is Osage and we are unique.”

Proctor said the Osage government is modeled like the western form of government and not a traditional Osage government. She disagreed with obtaining more legal advice, “We need to stop spending money by someone [attorneys] working full time on the salary, reduce it as far as I am concerned.”

What is the role of Assistant Chief?Candy Thomas, Pawhuska

Proctor said the role of assistant chief is to support the chief, who is the No. 1 leader. She said she has worked with Margo Gray on business transactions, she has worked with Geoffrey Standing Bear on legal cases, proving she can work with both candidates for principal chief. She said she’s a mediator between chief and congress and had she been elected assistant chief in 2010 she would have made decisions different than Chief BigHorse.

“I know the limits of my authority and take direction,” she said. She later said her role would also entail, “Reviewing policies and procedures, monitoring outside litigation, not interfere, but monitor.”

Red Corn said understanding who’s boss is key and understanding the final decision comes from the principal chief. He said the assistant chief has the job of being the chief’s No. 1 advisor, confidante. Bringing skills to aid the chief, communicating and putting out fires, representing the Nation and making clear the vision of the chief.

The candidates passed on rebuttal.

What form(s) of economic development do you intend to develop or initiate for the residents of Osage County? Jacquelin Boulanger, Pawhuska

Red Corn said the Osage LLC “really missed the mark” on getting jobs to Osage County and now the LLC has a new board he hopes will concentrate on organizing businesses Osages have been asking about for years, including the cattle and oil business. He said the Osage Constitution doesn’t spell out how to go about economic development but the Nation’s foundation, boards, grants and Osage Nation Energy Services LLC are a good start.

“The ONES, they’re studying, they’re calculating, those are some ways we can raise money,” he said. “To talk to our boards and do some development.”

Proctor said the tribe should compact the Pawhuska IHS clinic and hire its own doctors, medical professionals. She said the tribe would collect on third-party billing for Medicare, Medicaid and Veteran’s Benefits. She said would like to provide a 12-chair dialysis unit, a mobile dialysis unit, which would also see profits from Medicare and Medicaid.

“Health care is the new gaming.”

Red Corn said he had Proctor at a disadvantage because he was privy to information on the state of the Pawhuska IHS that she wasn’t. He said a very thick study of the clinic was dropped through his car window that was an audit that went through program-by-program, issue-by-issue, and it was bad.

“There’s a reality check at the Osage Nation on what we can and can’t do,” Red Corn said.

Proctor said, “Well, let’s roll up our sleeves and get working,” as members of the crowd began to laugh. She said the Osage LLC wasn’t working, even after the congress had “plowed” $19 million into the organization.

“Anyone that’s voted for funding that entity needs to be held accountable at the voting booth,” she said.

Proctor said she hoped that would never happen but she knew it was a possibility that the chief, for whatever reason, could be removed or incapacitated. She said she was a graduate of Harvard, an attorney, a former housing director who oversaw two housing operations in Michigan and Oklahoma. She was the attorney of record who sought justice for alienation of headrights and was intimately familiar with the 16 amendments made to the 1906 Act and has served as legal counsel to as many as 12 tribes.

Red Corn said he had 17 years of management experience, including owning and operating his own successful business. He has served on the congress for eight years, faced the challenges at the Osage Nation, he said legal advice can be obtained from anywhere but it was leadership who could lead people to a goal and get them there. He said while he’s sat on congress they have published two volumes of law, succeeded in having a transparent government, worked and compromised with 11 other elected leaders.

Proctor said she was the Outstanding Alumnus at Harvard one year; she was president of the Osage County Bar Association for two years in which there are 50 attorneys. Proctor said she, along with the legal team of the Fletcher Case, appealed the case to the U.S. 10thCircuit Court of Appeals twice, and won.

Red Corn said, “As a shareholder I would really like to know what that Fletcher Case is about.” He said he only had two major awards that he was proud and honored to have and they were when he was elected to lead as a member of the Osage Congress in 2006 and 2010.

Proctor said she makes the earth move, she makes things happen. Her mother passed away in April and received burial assistance and her family was grateful, but when her mother was alive she never received anything from the tribe. She said she would develop an Elderly Stimulus payment, tribal program for Elder Affairs.

“I will look out for the interest of the people.”