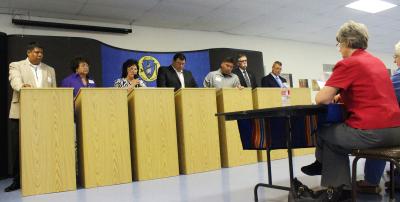 Second group of congressional candidates debate on May 4

Question #1: We’ve seen a cultural shift lately in terms of marriage equality. What are your thoughts on the Osage Nation granting marriage licenses? Would you sponsor legislation to allow same-sex couples to be married as well? – Billy Keene of Skiatook

This question took several candidates by surprise with several stating they would need to research the issue first while some directly answered the question on whether they would support the Nation issuing same-sex marriage licenses.

The Osage Nation does issue marriage licenses through the tribal court system, but it does not recognize same-sex marriage. The state of Oklahoma also does not recognize same-sex marriage, but regarding other Oklahoma Native American nations, the Cheyenne & Arapaho Tribes’ marriage law does not specify that two people need to be different genders to marry, according to a Yahoo! news article. The C&A’s marriage law made headlines in October 2013 after two men were married after seeking a marriage license from the tribal court.

“Well that’s quite a question I really don’t know much about,” Brownfield said with the audience breaking into laughter. “Would I sponsor it? I don’t know I’d have to get in it, research it, see what’s going on with it.”

Rutherford agreed “it’s quite a question,” but “we’re a sovereign nation and with that comes a lot of different rights … I prefer to take the time to research it out, I’m not against it, I’m kind of in the middle.”

Mays said: “I am not against same-sex marriage, if it’s your preference, who am I to judge? As far as the Osages giving out marriage licenses, that’s something I’d have to look into … We have a big plate that is full right now, adding something to it, I don’t know if we’re ready for it, we may be … I’m not here to judge anybody, I don’t expect anybody to judge me.”

Kidder said he understands same-sex marriage is a hot-button current event issue on the national level. “As far as Osages getting into the licenses, I would have to look into that also. I don’t think that’s where we need to be now, we’ve got a lot of other fish to fry because right now we’re looking at bigger issues.”

Conner said he agrees it’s an individual’s right to make a choice in having a partner. As far as same-sex marriage goes, Conner said he believes it is something to consider, “down the road, at least in terms of the morality of it. I think we’re all in agreement that love is a mysterious thing, people find it with different people … I do think it’s something we need to look at more, I do believe in principle there’s no reason why we couldn’t do something like that.” Conner also added he agrees with Kidder that there are other bigger issues the Nation needs to consider at this time.

Big Eagle said he probably would not sponsor legislation for the Nation to issue same-sex marriage licenses. As far as listening about the topic, he said, “I’ll always listen to anyone. I know what issues are important to the mass majority of the Osage Nation, there’s so many things that’s wrong, there’s so many thing we need to fix and I know this is an important issue for the people so you can’t say you will not listen or push it aside because everybody has an opinion.”

“Of all the questions to ask, I wasn’t ready for this first one,” Hamilton said. “In principle, yes I’m for same-sex marriage, but I don’t know about sponsoring legislation right now, I don’t know if it’s even on the priority list. You’d have to look at it against and study the impact of it all. What’s the impact and ramifications of this law? Do we do licenses right now? Is it going to be recognized by the state of Oklahoma?”

Question #2: Identify the ways that the Osage Nation elected officials spend government money foolishly. How do you plan to change this kind of wasteful spending? – Annette Gore of Aurora, Colo.

“Right now I know that the Congress makes appropriations according to budget, different departments all have to present a budget as to what their needs are for the coming year,” Rutherford said describing the Nation’s annual budget process. “As to the foolishness of it I think that maybe they should do more accountability on how they spend in the previous years, why they’re asking for more money in different areas, what their plans are for that.”

Mays said, “Money is money … you better have the proper boards to learn how to spend that money, if you do not, you’re wastefully spending … I’m sure there’s spending that doesn’t need to be done, that’s obvious, I just want to be part of the solution of where that money goes.”

Kidder said budgets, whether the Nation’s or one’s home budget, need to be in check considering “money is tight” in today’s economy. “We’ve got to understand where this money goes, whether it’s federal or casino money, it should be accounted for. LLC money should be accounted for. There should be no reason we don’t know where our money goes,” he said adding he wants to see quarterly reports on the government’s spending.

Conner said as the 2006 Osage government matures and gets more sophisticated, he hopes the Nation can budget more on “foresight” and that more “effectiveness” data can be presented with budgets to show cost benefits. In addressing foolish spending, Conner said: “If we’re looking at large expenditures, capital outlays that we do have significant public input on spending millions and millions of dollars on things that we’re only informed later, this is what it’s going to do.”

Big Eagle referred to the casino expansion project spending issue discussed in candidate group one. “Giving money to fund casinos but you don’t know where your money’s going, ‘Well we’re getting 100 million bucks but we can’t tell you where the money’s going’ – now is that considered foolish? Of course. We need to structure this money, we need to save this money. Investing in anything that comes down the pike is not going to be good for the Osage Nation as a whole. We have a lot of programs that we’re responsible for.”

“Has anyone heard of the LLC? I believe that was a foolish spending of our money, we have nothing to show for it, nothing came of it,” Hamilton said. “Attorneys make a lot of money off Osage Nation. Look at the (January 2014 removal) trial – how long did that last? That lasted longer than any of us wanted it to … Back to the LLC and gaming monies, I want to see a logical order of the process – what’s the process of the dollar that goes through that system? We don’t see that, there needs to be transparency … I’d like to see it implemented, not just talked about.”

Brownfield said she agrees with her fellow candidates that the LLC spending was a waste of money. “We have resources within our tribe for business opportunities I think and I’d like to see that implemented down the road … I intend to research it, if I am elected.”

Specifically what will you do to restore the balance of power between the three branches of government when it is apparent to the Osage constituency that Congress has overstepped their boundaries by inserting themselves into the daily functions of the Nation? Scott George of Hominy

Mays said he believes the branches need to work together because, “it’s obvious we saw what we get when they don’t work together, we get families that are hurt, it’s a bad deal, nobody won out of that, we open doors that shouldn’t be opened … power comes from people working together, unity.” For example, Mays said “that congressman, if he don’t get that bill passed, he needs to go over there and figure out why the Chief vetoed it or talk about it, talk to somebody … You better figure out a way to make it work if it’s something you believe in.”

Kidder said, “Restore the balance is already in our constitution right now. The power is there, do we abuse it or do we use it? That’s our choice up there (at the government campus on the hill). Right now we’ve got to come together as a Nation, as the Osages … I feel like we can do something, we can move it in a good direction.” Regarding the elected officials in the legislative and executive branches, Kidder said, “We all have our roles, we stay in those roles to make this government work and that comes from working together. We may not have to agree all the time … but we find that middle ground to an agreement.”

Conner said it’s good to have educated officials that understand how a three-branch government works. “The other part that goes is if you have a common purpose to serve the Osage people and you listen to the Osage people and you honor their wishes then you have a common goal and you keep that out there in front of you. As Mr. Kidder said, there is a middle ground and there’s some give and there’s some take.”

“Restoring balance in government is very, very important,” said Big Eagle. “If the Executive Branch and Congress does not get along, you’re not going to get anything accomplished and what it usually boils down to is egos, hard feelings and personal rivalries that have existed for a very long time. Communication breaks all of that down … The Osage Nation wants a better government and only working together, not separately, can we accomplish that and step forward.”

Hamilton said every part of the Nation’s government has its own problems, adding, “I think a new approach needs to be taken, this approach doesn’t need to be from a group of people or an individual, it needs to be taken on by the Nation. I believe the Nation needs to take on these problems, especially the ones that are attacking our sovereignty. Each branch of government needs to support each other and provide a unified front in this matter.”

Brownfield said, “the need for greater communication with all the branches of government by utilizing a common sense of respect in relationships – we need that really bad in our Congress. I’m not trying to down anybody, or anything like that, but I’ve looked at it and I’ve seen what has happened in there and I just think we need some strong reliable and respectful leadership and I’m an independent thinker, I think on my own and I decide on my own.”

In the Fourth ON Congress, Rutherford said she wants to see members set their personal feelings aside and, “let’s have a common goal to do what’s best for this Nation, let’s put our minds together, let’s build something good, keep all those personal feelings on the outside because we can’t accomplish anything when we’re fighting.”