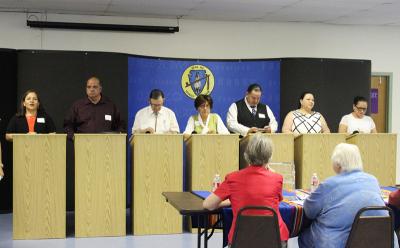 Third group of congressional candidates debate on May 4

Seven candidates for the Fourth Osage Nation Congress participated in the third and final debate group during the May 4 Osage News General Election Debates.

Those seven Osages took debate questions randomly drawn that touch on whether tribal officials should be sent to jail for illegal personal financial gain, what are their qualifications and skills for holding Congressional office and how do they identify a “real Osage.”

Do you favor jail time for officials convicted of serious crimes that involve personal financial gain in connection with malfeasance in tribal office?– Addison Jump of Rio de Janeiro, Brazil

Luttrell said if the law says jail time is a penalty for such serious crimes, “then that definitely needs to be carried on. These are situations that we’ve had a lot of problems with over the years, so I definitely agree with jail time.”

“I believe it calls for jail time for anybody who has broken the law,” Tallchief said of Osage law. “I also think the law should spell out certain things as to the consequences.”

“Yes I am for jail time as long as the jail’s not in Rio de Janeiro,” Boone responded, with the audience laughing in reaction.

Buffalohead said: “For too long we have been a Nation that sweeps its problems under the carpet and we like to turn the other way and with the new government, our people spoke out and said ‘we’re tired of that, we want accountability, we want transparency, we want this form of government to change’ … if that’s the law in place, I would support that.”

Pratt said she also agrees jail time should be a punishment, “because it has happened time and time again and I don’t know the specifics of every case, but I know a lot of times the accountability is not there or (people) are not held responsible for their actions.”

Jones said she also agrees with jail time as punishment for elected officials convicted of stealing from the tribe. “We need to be specific in what constitutes that – is somebody stealing from us and they’re getting financial gain? Yes we need to hold them accountable because they’re taking away from your money.”

How do you identify a “real” Osage?– Annette Gore of Aurora, Colo.

Norris raised his hand and quipped: “I’m a real Osage.” He then said, “I believe the definition of an Osage Nation member is already spelled out and I support that. You have to be a descendent of someone who appeared on the 1906 allotment (act). And I believe as long as you meet that criteria, you’re eligible to be a member of the Osage Nation.”

Tallchief said she agrees with Norris “it’s already spelled out who’s an Osage.”

Boone said he agrees with Norris and Tallchief, noting it’s “a very sticky issue. What can you say? If they have a strawberry pop and a meatpie in their hand they’re a real Osage?”

Buffalohead said, “if you can trace your ancestry back to the 1906 Act, that’s what constitutes you being Osage, that’s what says you have the right to membership with the Osage Nation … When I was growing up, only the shareholders could vote and I wasn’t able to get education money through the tribe and there were several scholarships out there that I wasn’t able to obtain because I wasn’t actually a member of the Osage Nation and I remember my mother and my grandmother telling me ‘You’re Osage right here,’ [while pointing to her heart] … I think this person is asking more about blood quantum and if they are welcomed back here and I say ‘yes’ to that.”

Pratt said: “I also support and believe in the 1906 Act and ancestry because today our power’s in the numbers and I think we need to embrace being raised, myself having the benefit of being raised, culturally here. I think we need to embrace all Osages everywhere. I was in New Mexico a couple of years ago and they asked how we would support them, how we’d share culture with them. I think we are doing a good job of trying to reach out to Osages outside the reservation as much as we can virtually and whatnot … We want everyone to care, we don’t want it [being Osage] to be a convenience, something that’s used to benefit – We want you to care about being Osage truly in your heart.”

Jones said she agrees people are Osage if they can trace lineage back to the 1906 Act, adding, “it’s our culture, it’s what’s in our hearts, it’s what we believe, we think we’re Osage. If you think you’re Osage and you have a membership card and the culture that you live in today … It’s so different if you don’t live here on the reservation and just because you don’t live here doesn’t make you not Osage. I believe being a tribal member is what makes you Osage … In order to vote, in order to receive benefits, in order to benefit from what we have, you have to have an Osage membership.”

Luttrell said: “How can you not agree with the constitution that’s quite clear? I think on a personal note, I think one of the great things about our people is we had a place in our society, that place was taught to us at a very early age. We were given a name and that name stayed with us all our lives. But at the same time … also came the ability to be individuals. That was something we were taught something is quite prevalent today … As long as the Osage Nation exists then we as a people will always extend that to all members regardless of their blood quantum.”

Luttrell also took a moment to poke fun at himself in his answer: “Change is coming, we’re a people that understood growth, change and adaptation. When I was a young man, I was one of the lightest people in that arbor and now … I’m one of the darkest. And so, change is coming folks!”

What qualifications and skills do you bring to this position and what is your leadership and management?– Candy Thomas of Pawhuska

Tallchief is a retired nurse with several years working for Indian Health Service facilities in New Mexico and she also worked as a community health representative (CHR) for the Osage Nation 40 years ago. She said she’s also worked for six northern Oklahoma tribes as a grant writer, bookkeeper and leadership in nursing.

“I am retired now and I have plenty of time to bring these skills to the Osage Nation to be able to be an advocate for the people, I also have the ability to listen to the people, should I be elected, I will hold community meetings, address the strategic plan,” Tallchief added.

Boone said: “I’m a small business owner, I’ve been in this chair for the past four years, I’m honest, I’m open-minded. I’ve had a good strong working relationship with both William “Kugee” Supernaw and Raymond Red Corn – those are both complete opposites of the spectrum.”

Buffalohead holds a master’s degree in human resources from the University of Oklahoma, a bachelor’s degree from the University of Maryland and previously worked in human resources for the Nation’s former Osage Million Dollar Elm Casino in Hominy. “I wrote policy and procedure for the casino from the minute that I got there to the minute that I left … I was able to hit the ground running four years ago, I credit that to my background in human resources … There is no learning curve, I am a leader, I work really well with everyone on the second Congress and the third Congress … As elected officials we work with whoever the people say we’re going to work with and that’s a skillset you just have to have in these positions and in holding these seats.”

Pratt said she hold’s bachelors and associate’s degrees and is currently working toward a master’s degree in business. “I have a long work history and I think that my time and experience at the Drug Enforcement Administration, I used that investigative experience and brought that to the Osage Nation, I brought that accountability. I’ve implemented many services to the (ON) Temporary Assistance for Needy Families (TANF) program (of which she serves as director) … I’ve implemented drug testing into our program about a year-and-a-half before the state did because I like that accountability of our monies as well as to help our people at the same time.”

Jones said: “I believe my 10 years of working for the Osage Nation has given me an opportunity and insight to look at what the constituents need.” She is currently the director of the ON Constituent Services office which handles several services for Osages including health benefit card inquiries, burial assistance, handling the gathering fund applications for Osage organizations requesting assistance for meeting hall costs and referring Osage clients to the proper services. Jones said her office serves an average of 4,000 constituents per year.

Luttrell said: “I’m a McDonalds corporation-trained manager and I served as the outside operation manager for Castle Pines golf club in Castle Rock, Colo … I’ve been in business for myself for the last eight years, started doing training films for the casino industry. Now I’m working on a documentary, I’m always trying to keep an open mind … And I’ve recently been awarded a state of Oklahoma real estate license … With power comes temptation, that’s the truth … I’m aware of these things, I’m not going to make these mistakes and I agree with Dr. Shaw – I believe that my life experiences have brought me to this moment in my life and I’m ready to move forward and serve the Osage people.”

Norris, who is a former chief executive officer for the IHS Pawnee Service Unit, said: “I’m not here to collect a paycheck, I’m retired, I spent 28 years on active (military) duty and in government service and I’m devoting 100 percent of my free time now to serve the Osage people and the Osage Nation government. I have 28 years of proven leadership skills, experience and the education necessary to bring accountability and transparency to our government, I have many years of collecting and analyzing data and I have implemented planning and evaluation methods… I have the courage and fortitude to make hard decisions and stand my ground, that’s why I believe I’m a good congressman.”