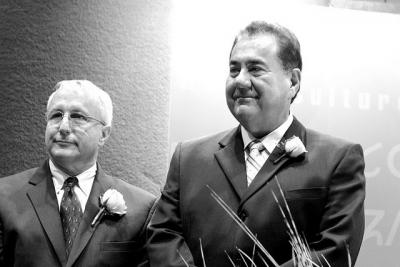 PONCA CITY, Okla. – A new chapter in Osage Nation history is starting after a total of 10 Osages took oaths to hold office in the tribe’s three-branch government for the next four years.

On July 2, Osages elected to serve on the Fourth ON Congress and Executive Branch were sworn into office after two tribal court judges took their oaths at the newly built Osage Casinos-Ponca City Hotel before a full-capacity crowd.

More than 400 people attended the event held in the tribe’s largest casino and hotel property. The 10 a.m. event kicked off with honor songs performed by Osage men and lady singers, followed by the Pawhuska-based Harold Bigheart Smalley American Legion Post 198 bringing in the flags.

Tim Tall Chief served as the inauguration’s emcee. Tall Chief is a former ON health advisory board member who was recently confirmed for a spot on the Osage Limited Liability Company (LLC) board.

“This is a very special day for all of our Osage people,” Tall Chief said adding “it’s a new day in history, it’s always a pleasure to be able to witness these things that are special to all of our people.”

According to the Osage Constitution, Supreme Court judges and the Trial Court Chief Judge position are appointed by the Principal Chief then those appointees are subject to ON Congressional confirmations. Once confirmed, those judges serve a four-year term before being subject to retention by Osage voters to serve another four-year term. Drent and Stepson won majority vote for retention in the June 2 general election.

Logan is retiring from the Supreme Court, which leaves two spots vacant on the Nation’s three-judge High Court.

Drent administered the oaths of office for the Executive Branch offices and Legislative Branch.

Raymond Red Corn then took oath for his first Executive Branch term as Assistant Principal Chief. Red Corn is the former Speaker of Congress who served two four-year terms on the Congressional body where he served on several committees as well as the Second Speaker post.

For the Legislative Branch, Drent called individually on the incoming members of the Fourth ON Congress to take their oaths of office in alphabetical order.

Also during the inauguration ceremony each of the incoming elected officials received personalized Pendleton blankets along with certificates given to each officeholder.

Cole said this is an important time in Indian Country and noted the Osage Nation’s development progress including its new casino and hotel venue and the landmark 2010 Osage trust case settlement with the federal government.

“You’re taking the success and you’re building on it and diversifying and your enlarging your membership,” Cole said. He also noted that through history since the 18th and 19th centuries, Native American tribes became more prosperous after participating in the non-tribal “broader society” around them and taking those tools and skills back to the tribes for building their own successes.

“Economic power, education, political participation – those are the tools that people use to protect tribal rights and those are the tools they use to begin to create the physical, the intellectual and yes, the economic capital that you have to have to be successful in America, and frankly, beyond it. To preserve tribal nations, you participated in non-tribal activities.”

Cole is currently one of two Native Americans serving in the entire U.S. Congress. The other is Markwayne Mullin (Cherokee Nation) who represents Oklahoma’s second Congressional district.

After the swearing-ins were completed, Standing Bear returned to the podium to deliver his first public remarks as Principal Chief. Standing Bear acknowledged the different forms of Osage government that existed throughout the centuries leading up to the current 2006 government and constitution.

Despite the orderly government and cultural structures Osages have always followed, Standing Bear cautioned the tribe still needs modern-day governing order. “In fact government appears to be of a great assistance in providing the infrastructure from reliable water, electricity and other vital services,” he said. “We must have medical care as we conduct our activities. We also need protection from outside forces who may not agree with our way of life. We have within our own customs, people and methods to maintain order and we do the best we can – Yet we are lacking in ways to completely keep us away from those substances, practices and people who have proven harmful.”

Standing Bear then said: “It is therefore a priority of this administration to strengthen our defenses against these threats. This requires us to make laws, which prohibit harm to our people and their property and which have consequences for those violations. It requires us to maintain our courts and law enforcement and to coordinate with federal, state and other tribal governments as well as local cities and towns. It requires real solutions to substance abuse and the pain of addiction. We believe prevention is tied to good health. We believe that good diet and exercise are essential to all of us from youngest to the eldest. To whatever extent possible, this administration will support our community gardens and our efforts to bring back our traditional foods through the seed banks and the gardens of those who have thankfully kept the tradition of food going.”

Standing Bear said he also vowed to ensure services such as the higher education scholarship program and burial assistance remain funded and tribal money would be spent according to what Osage people want. He also noted: “We will have to spend money, but this administration will always remember all the money and property of the Osage Nation belongs to the Osage people, this includes our casinos.”

Standing Bear is the fourth Principal Chief to serve under the 2006 Osage government.

The 100-plus minute inauguration event was not all serious in nature – thanks to occasional humor shared by Tall Chief who is a seasoned powwow emcee. During the Pendleton giveaways to the elected officials, Tall Chief took the microphone and said: “They’re each getting a blanket and a get-out-of-jail-free card.” The audience laughed as he added: “Sorry, had to do it.”

There was also a brief moment of confusion on the stage on which presentation would occur next, with Red Corn, Standing Bear and Tall Chief speaking off-mic. Then Standing Bear said into the mic: “This is an indication of what we’re going to have to do – straighten things out.”

The audience laughed, cheered and some women lulu’d.

Plaques and blankets were also presented to outgoing Third ON Congress members including Standing Bear, Red Corn, Daniel Boone (absent) and John Free in addition to Buffalohead and Supernaw.

Standing Bear presented blankets to outgoing Principal Chief Scott BigHorse and Assistant Principal Chief Terry Mason Moore whom he thanked for their service and said he would remain in touch as the administration transition continues.

Osage musician and songwriter Marca Cassity performed her song “Bells” during the ceremony. Cassity is an ON Foundation grant recipient who successfully held a matching grant fundraiser earlier this year to record her album featuring the song which has Osage male dancer bells in the background.

Osages from near and far attended the inauguration ceremony along with regional non-Osages and dignitaries from state, federal, tribal and local government municipalities.

Osage constituent Rebekah Horsechief said she enjoyed the inauguration ambiance. She also quipped she got a kick out of seeing a non-Osage person walk among the crowd handing out meatpies to the mingling guests after the event.

“Elected officials are representative of the majority Osage vote, which is essentially a strong common theme of wants, needs, concerns, ideas and values,” Horsechief said. “What stands out for me this time about our elected leadership is that they are all local community people. For me, there isn't one person that I am unfamiliar with. I am especially familiar with our new Chief Standing Bear who I've sat in Native American Church meetings with, who is an avid Osage language supporter, participates in our In-Lon-Shka, and was a sitting member of the Osage Congress. I admire the cultural, academic and lived-legislative experience he will bring to the table as Chief.”