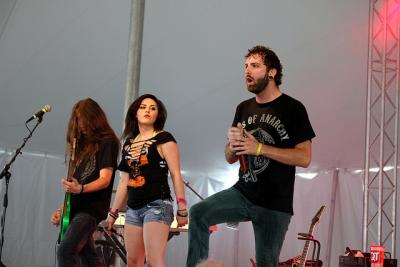 Braxton and Roxanne Gothard have a love of music. It began at a young age with playing instruments and singing but when Braxton heard heavy metal for the first time he knew that’s what he wanted to do.

Now, Braxton is the lead singer for the heavy metal band “Enslaved by Fear” and his younger sister Roxanne is the keyboardist and back up signer for the band. Fans know Braxton as Brax Goth and Roxanne is known as Rox Goth. Braxton has been with the band for a year and Roxanne has been a member of the band since December 2013.

This year they performed at Rocklahoma for the first time, the biggest venue they have played to date.

“I am very excited, this is the largest venue we have played and nervous because it is not my genre of music that I prefer, but I am excited to play in front of the fans,” Roxanne said.

Enslaved by Fear has played in Tulsa, Oklahoma City, Kansas and Arkansas before they played Rocklahoma.

Braxton has had a passion for singing since the seventh grade as well as playing the bass guitar and drums. His favorite genre of music to play is heavy metal or metalcore, which is a broad fusion genre of extreme metal and hardcore punk, according to Wikipedia.

Roxanne has played the piano since the age of eight and has been singing since she could talk, she said. She enjoys playing in the band however her genre of choice is New Age and singing ballads. The siblings grew up on the West Coast with their parents April and Eric Gothard. They now live in Pawhuska. Their mother April is the Pawhuska Indian Health Clinic director.

“I am so proud of them and this opportunity,” April Gothard said. “I am their biggest fan.”

Rocklahoma is a yearly music festival in Pryor. It has several stages for artists to perform with artists performing till early hours in the morning. Rocklahoma brings in many big named bands to perform on the main stage and allows local bands to perform in front of fans on the smaller stages.

Enslaved by Fear played on the Axis Stage, May 23, at noon. The axis stage was located in the camping area. Fans filled up the Axis Tent and lined up in front of the stage to hear the band play.

“It is awesome to get to play at Rocklahoma with some of the biggest names in the music Industry,” Braxton said.

The concert had a big turn out with fans rocking out to the music being played by the band. The band put on a great show for the fans. Braxton and Roxanne and the rest of the band mingled with fans before and after the show and posed for photos with fans.

Keyline Magazine sponsors the band and Braxton is also a writer for the magazine where he oversees the Heavy Metal and Hard Rock article for the Keyline Magazine.

To see more photos of their performance at Rocklahoma, visit the Osage News Flickr set at https://www.flickr.com/photos/osagenews/sets/72157644479957330/