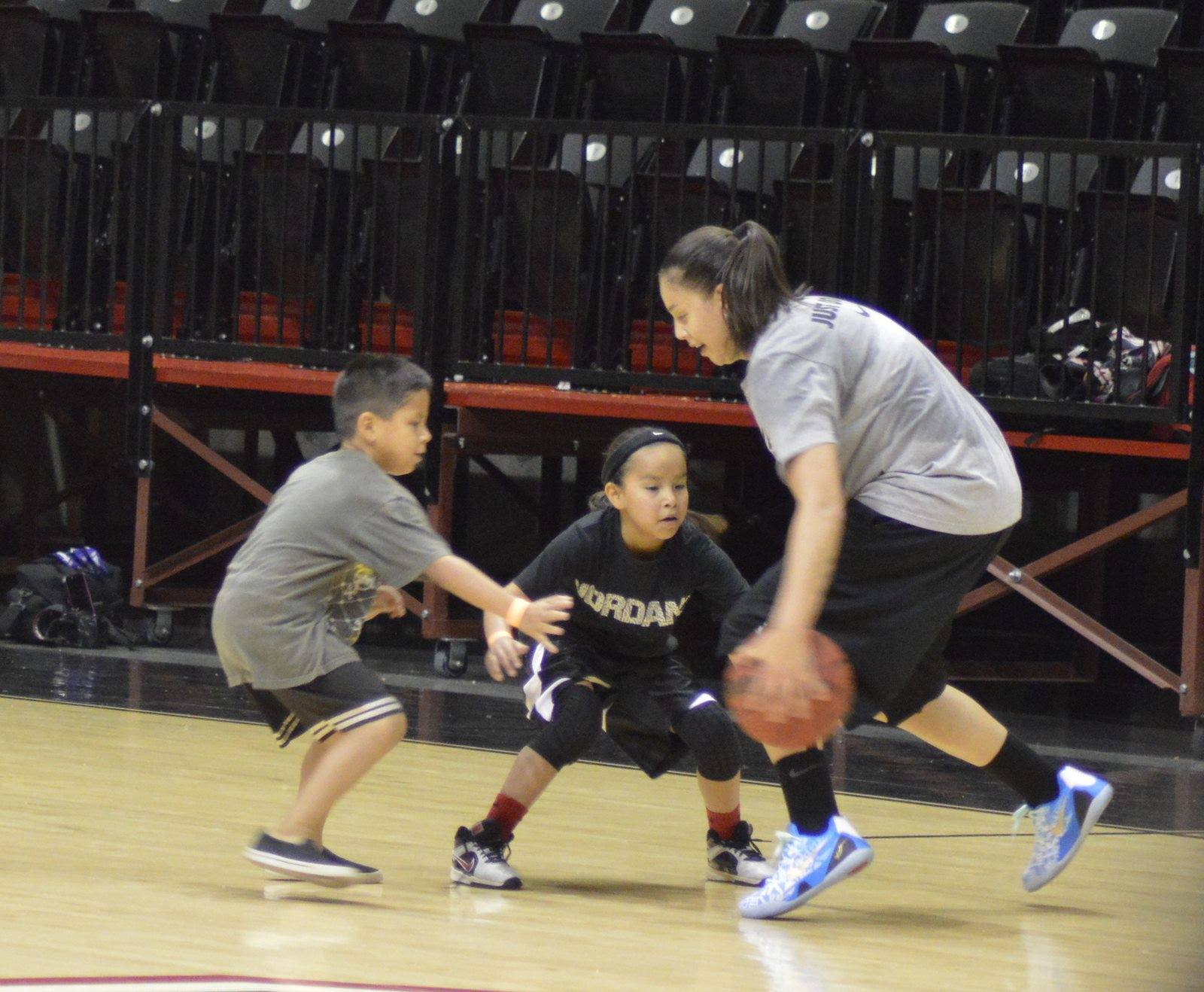 For any Native who has ever played “Rez ball,” or watched countless Natives fall shy of that college scholarship, watching Shoni Schimmel play in the WNBA is like watching a thousand dreams come true.

And so it was, on Aug. 1 at the Skiatook Multipurpose Activity Center, Shoni Schimmel, first rookie and Native American woman to win MVP of the WNBA All-Star game, taught and played basketball with 100 Osage children.

“We grew up on the reservation. I am always proud of being Native American because it’s cool, it’s awesome, and who wouldn’t want to be Native American, right?” she said to a cheering crowd of kids and adults.

For those who don’t follow women’s basketball or the WNBA, it’s fair to say that Schimmel is a hero in Indian Country. The 22-year-old, 5’9” point guard from the Umatilla Indian Reservation in Mission, Ore., was the 8th overall draft pick to the Atlanta Dream. She has the highest-selling jersey in the WNBA and has broken records in her high school career, her college career and now professional.

Often dubbed “The Umatilla Thrilla” and “Showtime,” named after her Magic Johnson-like passing skills by her Atlanta Dream coach Michael Cooper who played with Magic on the LA Lakers. She will be the first to say she is completely normal.

“We’re a very normal family, and everyone’s always looking at us, and we have a documentary about us … but we’re very normal,” she said. “That’s one thing I want to connect with you guys, is that we’re just normal people, we just happen to love basketball and it’s gotten us very far and we’ve had parents to lead us in the right direction all our lives and so we’re just very normal and if we can make it off the Rez, then you guys can too.”

The 2011 documentary, “Off the Rez,” chronicles two years of her life when Shoni was a junior and senior at Franklin High School in Portland, Ore. A poignant story of family and commitment, it shows the Schimmels in good and hard times, their perseverance and deep pride in cultural identity.

In 2008 her mother Cecilee “CiCi” Moses, a Umatilla high school basketball standout, took a job at Franklin High School as the head basketball coach and brought her daughters Shoni and Jude with her. As the coach she turned the school’s record from 4-20 to 20-4 in her first year. They went to the quarterfinals of the state championship both years and Shoni was one of the top 10 high school basketball players in the country. She finished her high school career with 2,120 points, ranking No. 6 on Oregon’s all-time scoring list.

She was one of the last top basketball players in the country to pick a school after she graduated and she chose the University of Louisville. Her younger sister Jude followed the next year.

Invited to the Osage Nation by Congresswoman Angela Pratt, tribal members had three days of Schimmel. First, “Off the Rez” was screened at the Constantine Theater in Pawhuska July 30. Second, Osage employees got to enjoy discounted tickets to the Tulsa Shock v. Atlanta Dream WNBA game at the BOK Center July 31. The Dream won 85-75.

Then, on Aug. 1, the Schimmels arrived in Skiatook around 11 a.m. for a one-day basketball clinic. First they showed a highlight reel of Shoni and Jude’s career at the University of Louisville and then answered questions from the audience for about 40 minutes before they began their basketball clinic.

Pratt, who is a mother of six, invited the Schimmels because she knew CiCi and Rick Schimmel would be there and could offer insight on how they raised two successful college athletes and who themselves are parents of eight. Their oldest son is 25 and their youngest son is five years old.

“I like their parenting style and this is why I invited them here, because of Rick and CiCi. I think they’ve done an excellent job and within our community, I think that’s where it starts, is the parents,” Pratt said. “We’re lucky they threw in the basketball portion so you children can enjoy but why they were invited here was so you could hear their message of positive lifestyle. Don’t do drugs, stay in school because it’s all around us, it’s easy to do, it’s easy to give up. It’s not easy to keep fighting every day, to do your very best. We talk about that Wa.Shka^ all the time in the Osage Nation, to give it your all, to do your best and that’s what it takes. And this family has shown that’s exactly what we talk about and they’re a prime example of that.”

One mother asked how did they keep Shoni and Jude focused on basketball and their schoolwork instead of boys. Jude, who is graduating this fall with her bachelor’s degree from the University of Louisville, will also start graduate work in the fall while finishing out her senior year on the basketball team.

“Education is very, very important. I can always remember, ever since elementary, I’ve wanted to have the best grades possible,” Jude said. “Education is very important because after sports, after your body has taken a toll from sports, you’re going to need your education to fall back on to get a house, a car, to raise a family.”

Jude said she went to a total of four junior high and high school dances and doesn’t regret the time she spent in the gym or playing ball with her sister. In April of this year Jude was named one of Glamour Magazine’s Top 10 College Women.

Teresa Bledsoe, Osage, and a basketball coach at Woodland High School in Fairfax, asked the sisters how much time they devote to practice.

“It depends on how good you want to be. I want to be the best so I practice and play all the time,” Shoni said. “Instead of going to the party, going out with my friends, all that stuff, I’m going to go to the gym, because that’s what I love to do and I just like to play basketball that much.”

“Seriously, she’d be out there at 2 o’clock in the morning, shooting, and she was like in the 5th grade … yeah, she was young. It was one of those hot, summer nights when all the windows were open and all you could hear is bounce, shoot, bounce, shoot … and we’re trying to tell her to come inside but seriously, that’s dedication,” CiCi said.  “These guys were outside, in the court, on the court, all the time.”

There is a famous photograph of Shoni yelling in the face of Baylor University’s Brittney Griner in the 2013 NCAA Sweet Sixteen game at the Chesapeake Energy Arena in Oklahoma City. Baylor was ranked No. 1 that year. Shoni had charged up the right side of the court, went behind the back, charged to the left side of the paint and facing a 6’8” Griner, all-time shot blocker, spun and lobbed the ball up backwards for a perfect bank shot off the glass. The place went wild.

“They called it a ‘circus shot,’ but the move she did against Britney Griner in OKC, she practiced that on that hoop, probably at 2 a.m. I mean she’s been doing that kind of stuff on that hoop all night, we’ve seen it,” Rick said. “And the reason why I say ‘circus shot’ is because people keep calling it that, and when you call it that it sounds like it was unrehearsed, kind of seems negative. But then to go to the All-Star Game and repeat that shot, it wasn’t an accident … she’s practiced it.”

Once the basketball clinic portion started Rick and Shoni led the camp, with Jude only leading groups with the microphone (NCAA rules limit Jude’s play outside of her collegiate career). The clinic was for Osage tribal members only and for children entering the third grade to senior in high school. Dividing the children into age groups, the Schimmels led the children through dribbling drills, passing drills and shooting drills, with Shoni participating in every group.

“Our daughter Olivia was so excited after the camp,” said Caron Littlecook, who lives in Skiatook with her family. Her daughter Olivia is a 9-year-old 4th grader and attends Skiatook Intermediate. “She said is was a dream come true to play ball with Shoni. She wants to be in the WNBA just like her.”

Blake Bledsoe, 12, who attends Woodland Middle School, loved that they got to play in a real game with Shoni. The last hour-and-a-half of the clinic was spent running a 5-on-5 pick up game with the winner scoring five points and the next team coming in. All 100 kids got to play.

“They didn’t waste a lot of time and made sure we all got to do the drills. I liked that Shoni and Jude were just normal people,” Bledsoe said. “I liked that they took the time to take pictures and sign autographs. I could not believe how fast Shoni was! She is a beast!”

Of course Shoni’s team won every time, and with about 10 of those points coming from half-court shots, sometimes the kids were too in awe to play. But the entire family stressed one thing: listen to your elders, your parents, your family.

“It’s important to listen to your parents, sometimes you don’t want to hear it but sometimes you just have to listen to them,” Shoni said to the kids. “We need more Native Americans out there in the world to show everyone what we’re all about because we can represent, we just haven’t gotten the chance to – to go out there and show the world what we can do.”