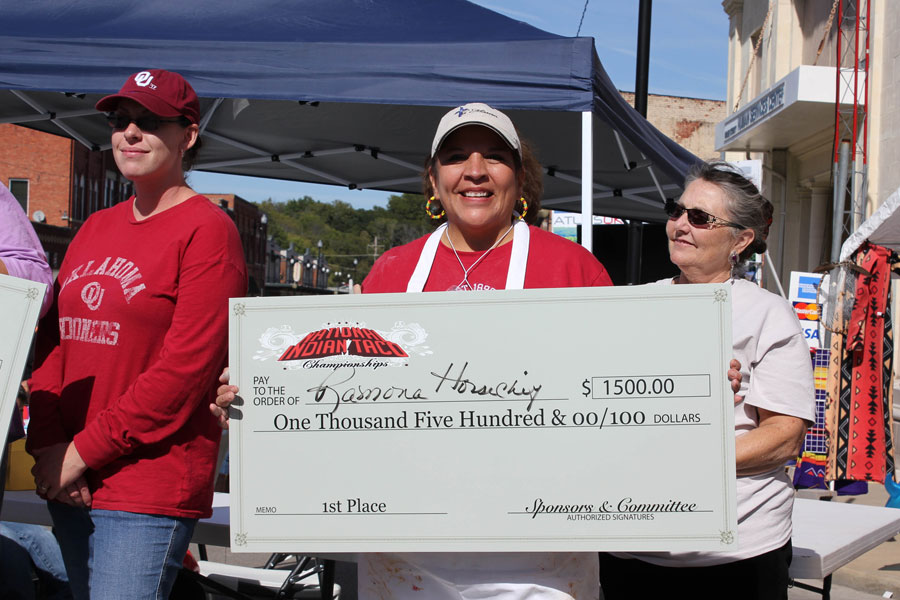 For the second consecutive year, Ramona Horsechief is the top Indian taco cook after winning first place at the 2014 National Indian Taco Championship in Pawhuska.

Horsechief (Pawnee/ Cherokee) took the winning honors and $1,500 in prize money after competing against 15 other competitors in the annual event held Oct. 4 on Kihekah in front of the Triangle Building. That day, the participants set up food booths where they prepared their Indian taco dishes for sale to the public and also prepared dishes for the two rounds of judging for the top three finishers.

This year’s People’s Choice award and $1,000 prize went to Dana Daylight, who ran a booth with family members including Mary Wildcat and Robynn Rulo. Spectators who sign up and pay a fee to sample tacos from the contestants and score their best choices determine the winner in the People’s Choice competition.

In this year’s competition, Horsechief said she cooked her chili with venison and buffalo meat. She also makes her own salsa with chilies that are roasted in the ground beforehand.

Horsechief launched Horsechief Catering last year and said she still holds cooking presentations on healthy eating ideas and cooks for ministry events. She refers to these efforts as “using her God-given skills and talent.”

This year’s participation of 16 food booths is up from last year’s count at 13, said event worker Patricia Wilson. By afternoon, Wilson said 64 people had signed up to be People’s Choice judges so they could sample Indian tacos from the booths.

Wilson said she was also encouraged by the day’s cool sunny weather which was suitable for the event. In 2012, the event took place amid cloudy skies that brought rain, sleet and snow all in one day.

Daylight said she felt “ecstatic, thankful and grateful” for her second win of the People’s Choice award. “It takes a lot of work – good chili, good bread and good service,” she added.

Daylight attributed her win to the homemade pico de gallo used on the Indian tacos, as well as the “love and laughter” she shared with assisting family members and the spectators who visited with them.

The 2015 National Indian Taco Championship date is set again for the first Saturday in October, according to the event’s Facebook page.