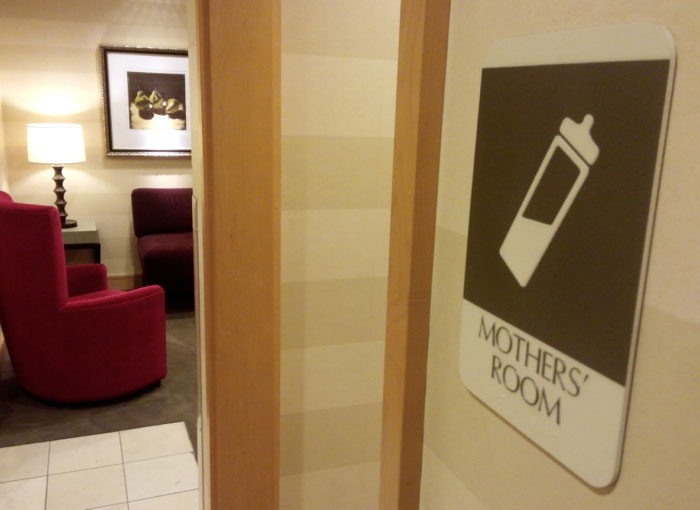 Breastfeeding tips and advice can be tough to decipher, but attitudes that say when and where women can breastfeed can add even more confusion.

This summer, controversies about breastfeeding in public popped up one after the other.

The store manager of a Beverly Hills, Calif., boutique told a mom to breastfeed in the bathroom, off the sales floor and out of the public eye.

A restaurant manager in Oregon ordered a nursing mother to cover up as she breastfed, despite a state law that protected her right to do so.

Women are instructed when and where it’s socially acceptable to breastfeed, says Linda Blum, a sociology expert at Northeastern University, but they’re expected to keep it out of sight, out of mind.

These cultural attitudes make it difficult for mothers to decide whether breastfeeding is right for them.

“You should have that right, but the problem is the attitudes haven’t changed,” Blum says. “No matter how discreet a woman is, it’s still something we’d rather was invisible.”

For Native moms, Camie Goldhammer (Sisseton-Wahpeton), founder of the Native American Breastfeeding Coalition of Washington, says breastfeeding has been lost over generations of historical trauma. That trauma peaked during the boarding school era where Native mothers were separated from their children.

Negativity toward breastfeeding is prevalent among many Native elders, Goldhammer says.

“It makes sense, though; when you think for the last five generations, how scary that would be because every baby before you in your genetic memory has been removed or lost or died,” she says.

Goldhammer, a lactation specialist and clinical social worker, warns most new Native moms that there will be opposition to breastfeeding.

“I see so many women that have low milk supply, and when I start inquiring about why their milk is low, it’s because a lot of times they’re afraid to breastfeed in public,” she says.

With or without social support

Goldhammer says some Native moms shy away from breastfeeding at first because they’re intimidated by being the only source of health and nutrition for their infant.

Research has linked breastfeeding to numerous health benefits for mom and baby. Breastfeeding reduces the risk of Type 2 diabetes and can help control postpartum bleeding, according to the Indian Health Service. The agency supports breastfeeding as a way to foster the mother-infant bond and to develop baby’s mental health.

Goldhammer struggles to convince many Native moms that breastfeeding can be a good option. But they’re not the only ones she has to sway.

“Seven in 10 Native moms breastfeed day one, but that number just drops drastically every day after that,” Goldhammer says. “There’s definitely some aspect of convincing moms, but also convincing the rest of the family so that they can properly support her when she’s at home with her baby.”

Cynthia Soto (Lakota/Puerto Rican) was adamant about her choice to breastfeed her baby for its health benefits, though few in her family had breastfed before.

When Soto first attempted to nurse her daughter, Kimimila, two of her sisters were in the hospital room with her, one of whom “didn’t have any positive words to say about it,” she says.

“She just freaked out about it, thinking it’s kind of weird,” Soto says, who lives in Chicago. “I was definitely [thinking] if you guys are uncomfortable with it, then you don’t need to be in the room.”

Outside the hospital, Soto says she received hurtful comments that breastfeeding was “gross” and misconceptions that breasts are only “sexual.” But she believes having her daughter in her mid-thirties helped her confront those negative attitudes.

“It’s just important [to reclaim] some of our ways of how we take care of our kids and that’s such the natural way to do it,” Soto says. “In my head, that was much more powerful than anybody else could say.”

Author of the book, At The Breast, Blum says signals about breastfeeding carry messages about U.S. culture. A century ago, she says, there was a movement away from “old-fashioned breastfeeding,” which was considered primitive or animalistic. Around the 1940s and 1950s, public health and sanitation measures spurred a move toward bottle-feeding.

Breastfeeding had “very negative connotations,” Blum says, which didn’t change much until the women’s rights movement.

Goldhammer says the Native community saw the same trend, but remains a few years behind.

“What I’ve found in the Native community is we’re kind of where the mainstream community was in the 1970s,” Goldhammer says.

Today new moms are in a conflicting place because they see cues that support breastfeeding, but lack the social support to do so, Blum says. That’s causing some mothers to look down on others for not breastfeeding, and Blum says people might think that’s easier than dealing with issues like sexuality, gender, and health care inequality.

Both Blum and Goldhammer agree that it is a challenge to make the choice to breastfeed or not, but one that moms need to make for themselves.