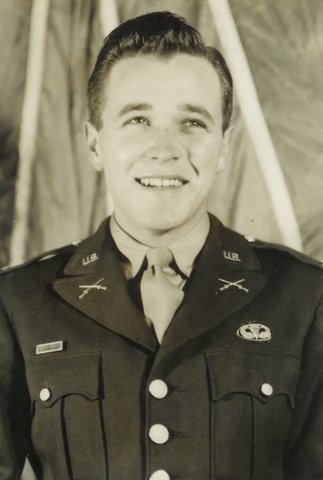 William Joseph Herbert, 91, member of the Osage Nation, passed away peacefully at his home in Solana Beach, CA, on February 23, 2015.

William Herbert was born in San Diego, on September 21, 1923, to Marden Avery Herbert, himself a native San Diegan; and to Irene Bryant, originally of Pawhuska, OK, and an original allottee of the Osage Indian Nation. He received his primary and secondary education at Grant Elementary School in San Diego, and Brown Military Academy, in Pacific Beach.

After graduating high school, as did so many of his generation, he faced the challenge of the Second World War by honorably serving his country. His military school education enabled him to receive his commission in 1942 as a 2nd Lieutenant in the U. S. Army Reserve. He transferred to Fort Benning, GA, where he received parachute training and earned his “jump wings”.

He was subsequently assigned to Fort Bragg, NC, where, in December of 1943, shortly before shipping out for Europe, he married his Hoover High School sweetheart, Bettie Ann Drake, originally from Newport News, VA.

When Lt. Herbert arrived overseas he was assigned to the 507th Parachute Infantry Regiment, serving first with the 82nd and later with the 17th Airborne Division. He saw action during campaigns that took him to France, Belgium, Luxembourg and Germany.

After the war, he received electronics and radio training at the Capitol Radio Engineering Institute, in Washington D.C. He later attended Columbia University, where he earned his Bachelor’s degree in Electrical Engineering. Returning to San Diego, he worked for several years at the Naval Electronics Laboratory, in Point Loma. He subsequently joined the T. Louis Snitzer Electronics firm where he spent the next 35 years as an electrical engineer and salesman.

A resident of Rancho Santa Fe for more than 54 years, He and Bettie raised four sons there, where he was active in many community and youth activities. He and Bettie settled into retirement in 1988, and they moved to Solana Beach in 2008.

A man of exemplary character, “Bill” Herbert will be remembered by his family and friends for his devotion to Bettie; and as a gentleman of quiet, good humor and unassuming dignity.

He is survived by Bettie, his wife of more than 71 years; a half-sister, Lorraine Cole, of El Cajon, CA; sons and daughters-in-law, Richard Herbert, of Long Beach, CA; David and Kathleen Herbert, of Escondido, CA; John and Mary Margaret Herbert, of Berkeley, CA; granddaughter Sarah and grandson Robin. Mr. Herbert was preceded in death by his youngest son, James Bradley Herbert in 2007.

No services are scheduled. Cremation arrangements will handled by the Oceanside Mortuary. In lieu of flowers, donations may be made to the Elizabeth Hopsice.