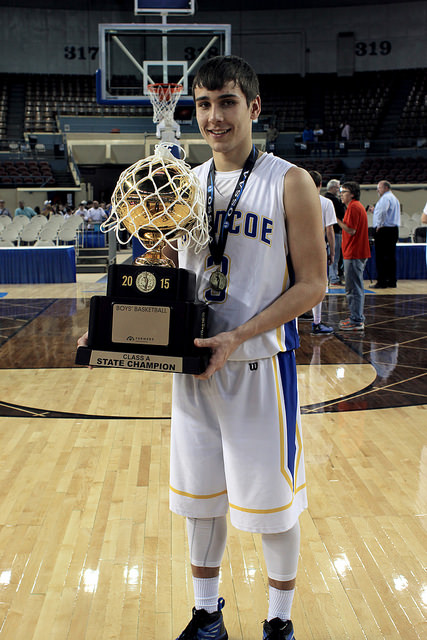 Joseph “J.K.” King Hadlock is a senior this year at Glencoe High School and a starting point guard for the Glencoe Panthers basketball team. This is his second year being a Panther and his second time to go to the State Championship and win.

Hadlock is a member of the Grayhorse In-Lon-Schka dance committee and a Pah-Su-Li’n Water Boy.

“J.K. moved to Glencoe last year and was instrumental in our undefeated 29-0 State Championship in basketball. JK averaged 22 points a game for our team that won the State Championship again this year and finished 29-3. J.K .is a great shooter, great ball handler, great rebounder and a great defender,” said Glencoe Head Coach John Lazenby III. “Without J.K. Glencoe would not have won State Championships the past two seasons. J.K. is also one of the top players on our baseball team. More importantly J.K. is a great young man and it has been a privilege to get to know him and his family.”

“Going out on the last game with a win is a surreal feeling, it’s amazing,” Hadlock said.

Hadlock had four personal fouls in the championship game and had to be careful not to foul out. He said he was getting nervous around half time and the coach calmed him down and told him he would be fine.

“J.K’s passion for the sport and love of the game helped him achieve his dream of a gold ball. He believed in that dream and had the courage and strength to pursue his life’s goal!” said his mother, Chris Hadlock. “With all the hard work, his true determination and his strong belief in his teammates, while being apart of the team for only two years, they not only achieved it once but twice.”

She said her family appreciated the friends and teammates that supported him, the coaches and the community of Glencoe.

“We are very proud of him and the young man he has become,” she said.

Hadlock is still unsure as to what he wants to do after he graduates in May but as many of the community in Glencoe can attest, it will be something awe inspiring.

J.K. is the son of Joby and Chris Hadlock. They are members of the Sacred Heart Catholic Church in Fairfax.