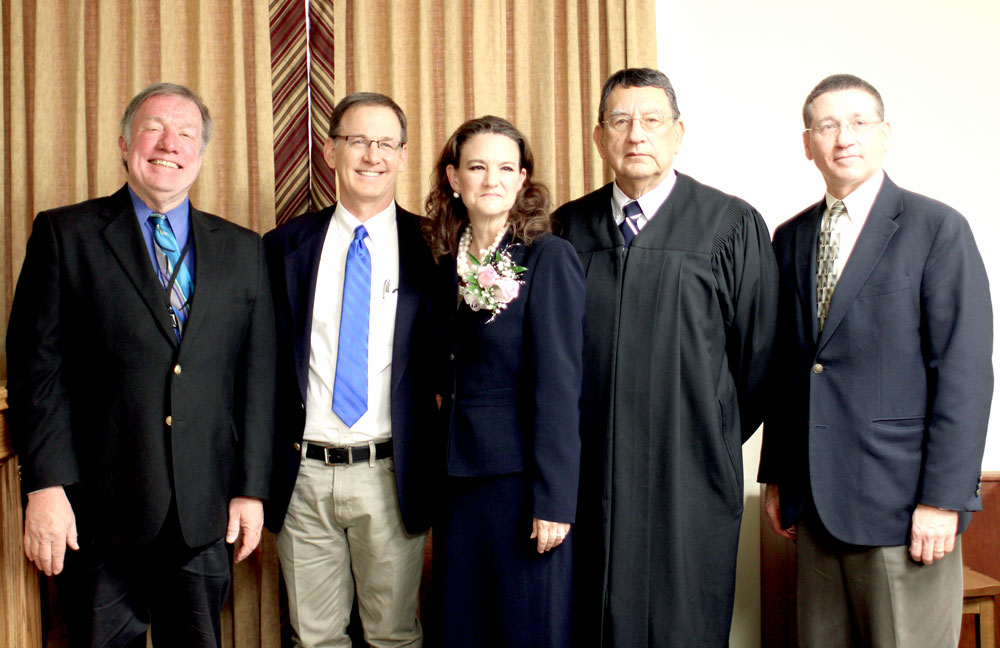 Principal Chief Geoffrey Standing Bear said the current threats to the Osage Minerals Estate and the nation’s water rights by the state of Oklahoma led to his decision not to reappoint Jeff Jones as the Nation’s Attorney General.

Instead he has appointed environmental lawyer and former State Judge Holli Wells as Jones’ replacement. Wells, who is Osage and from the Revard family, will begin in an interim capacity and will be up for confirmation from the Fourth Osage Nation Congress in the upcoming Hun-Kah Session that begins Monday, March 30.

“[Wells] is very familiar with environmental law and water law, issues involving sovereignty, in a way that is rare for Oklahoma lawyers. She is also a former prosecutor and a former state judge. She understands that part of this job is prosecution, which is the strength of Jeff Jones, but she is stronger, in my opinion, on the issues we need to fight the state of Oklahoma,” Standing Bear said. “And those battles are on us right now and we need to have the strongest legal arguments we can in this battle. Oklahoma is trying to take over our mineral estate and they’re trying to take over our water.”

As for Jones he said he knew Standing Bear was looking to replace him but didn’t know it would take place so quickly. He said Standing Bear called him yesterday to notify him and he didn’t know Wells was being sworn in the next day until the morning of the swearing in.

“I was caught flat-footed; I had no idea it was going to happen this fast,” Jones said. “My phone was blowing up last night. Several employees, not in my office, I didn’t talk to them until this morning, but several employees of the Nation called me and said they’d like to talk to me. They were surprised and even some of the Minerals Council people contacted me and said they were totally aghast.”

Jones, who lives in Skiatook, is the Nation’s first attorney general and was appointed by former Principal Chief John Red Eagle in 2011. He said he doesn’t have any job prospects lined up but said he told Standing Bear there was no other place he would rather be than working for the nation.

“I don’t think chief could find anybody that wants to be here any worse than me. I have no aspirations of moving on. But starting out as the first attorney general in that position – the office of the attorney general essentially is my baby. I started it, I think it looks like what I envisioned it to be,” Jones said. “I enjoyed the time here, I think we did some good, think we saved the nation some money by nipping some problems before they turned into big problems. I think we did a good job.”

There are ongoing cases Jones has been working on that he would like to see through to the end, he said. He has a dry-erase board at his office full of cases and projects that are ongoing.

“Chief told me that he had asked the new attorney general to treat them very well, not just clean house. I assured them I’m going to suggest they stay on. But that’s not under my control, so I’m not sure. I hope they can stay and keep their jobs,” Jones said.

Standing Bear said he had no control over what Wells decision would be concerning staff. He said he didn’t want to comment because he knows Patterson and Currey personally.

Standing Bear said he had been considering Wells since his campaign began in 2013.

“When I first took office, I wanted to have the administration I have chosen with the people in the highest offices to join in the same vision that I have,” Standing Bear said.

Before she was sworn in Standing Bear told the room how pleased he was to see both Wells and Jones working together for a smooth transition and that his job was to stay out of the business of the attorney general, in which Wells quipped, “So you say,” which made the attendees laugh.

Wells previously lived in Tahlequah and served as the Special District Court Judge for the 15th Judicial District since 2007. She received her Bachelor of Arts from Northeastern State University in Theater and minored in Secondary Education. She received her Juris Doctorate from the University of Oklahoma School of Law with an emphasis on Indian/Civil Rights Law, according to her resumé.

She’s had her own private practice, worked for Given, Funke & Work Law Firm and exclusively worked for the Couer d’Alene Tribe, in which she was a reader and recorder for a U.S. Supreme Court brief concerning water rights of the Couer d’Alene Lake. She was also a researcher for the first EPA case on record between a tribal entity and various mining companies that had a dollar value of one billion, according to her resumé.

She said she wants to hit the ground running and work with Jones for a smooth transition.

“I will be getting a handle on exactly what’s going on in the attorney general’s office, as far as different areas that are contracted out. Gaming law, water law, just the numerous contracts that we have and how they fit into the budget. Try to keep as much as possible in house in order to contract out less and use the budget for things that are more lucrative for the tribe and the office of the attorney general,” Wells said. “I want to hit the ground running and gain as much information as I can as soon as I can. I would like to get this running full speed and be ready to report to the next Congress on all the good things that are coming out of the attorney general’s office.”

Wells, who still has high school age children going to school in Tahlequah will be living in Pawhuska with her parents as she makes the transition. She said Jones has been very cordial and cooperative so far and she was very thankful for that.

Wells said she is very thankful for the appointment and it’s always been a dream of hers to give back to the nation. When asked how she felt to have been appointed, she had to hold back tears.

“It felt wonderful. I’ve been wanting to give back, without the help of the tribe I would not be where I am today. I would not been able to have the wonderful, rich job history that I do have without this tribe. The opportunity to give back and make a difference was huge.”