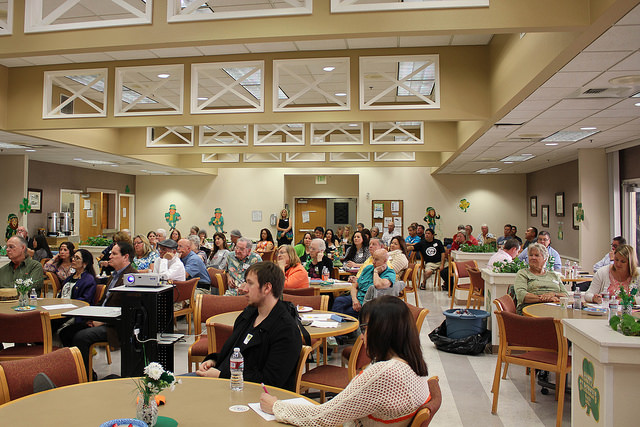 Danielle Glenn-Rivera, who grew up in Pawhuska and now lives in the Los Angeles area, said she enjoys attending the UOSC meetings “because I want to hear about what’s going on at home.”

Jennifer Brollier Johnson, of San Diego, said the UOSC events are “the connection to be with my family and my people. I love the feeling that it gives me, the feeling of being home and a strong connection to my culture. Also, it is a great way to keep informed of what is going on back home and the issues I voted on and the people I voted into Congress.”

Kathleen Pickett said she has been coming to UOSC meetings for years and those meetings date back to her parents time when her family left Oklahoma in the 1950s. “The UOSC is like a family and this was a family reunion of family and friends. It also brings family and friends from Oklahoma to help us reconnect with our tribe,” she said.

On March 7, over 80 Osages and their families gathered at the Carlsbad Senior Center reception room for the first UOSC meeting in two years. It’s the first UOSC gathering under new co-leadership with Osages Greg Clavier and Jake Heflin.

Wah-Zha-Zhi Cultural Center Director Vann Bighorse also attended and provided opening prayer for the day-long event. He later delivered a presentation on the Osage In-Lon-Schka ceremonial dances with Hamilton also speaking about the three-district dances that are held each June.

Clavier said he was pleased with the March 7 turnout and said he believes “it is important to carry on the tradition of the UOSC, providing quality programs and an opportunity for Southern California Osages to connect with our government officials, cultural leaders, family and friends and be educated on our wonderful, unique culture and traditions.”

Greg Clavier is the next generation of his family to oversee the UOSC gatherings with his father, Galen Clavier, serving as UOSC chairman in earlier years. Galen Clavier served as chairman for over 20 years and said the earlier gatherings included annual picnics with traditional Osage foods along with fellowship among earlier Osage generations who relocated to California and raised their families out west. “Many of the elders of that time have passed away, so I am glad their offspring are attending the meeting,” Clavier said.

For example, Teddy Myers, son of former UOSC Chairman Bill Myers, attended with his parents as he’s done in years past. Myers said he is interested in more web-based Osage language opportunities to learn the language.

Greg Clavier said the UOSC plans to take advantage of the ON regional gathering fund to offset the costs of future meetings. He said this funding opportunity would help relieve the costs of reserving a venue and food costs. As a result, Clavier said the UOSC will no longer need to charge membership dues and to rely on the gift item raffles held at each meeting, which raised money from ticket sales for the meeting costs during past meetings.

Heflin, a Long Beach resident, said plans for a fall gathering of the UOSC will be made and that meeting will take place in the Los Angeles area. Plans for alternating the meeting locations will mean shorter trips – and less traffic hassles – for L.A. metro residents like Glenn-Rivera, who said one-way travel time to the Carlsbad meeting was three hours for her.

In his first trip to a UOSC gathering as Principal Chief, Standing Bear described his relationship with the Fourth ON Congress as one that is “working hand-in-hand” together. He shared statistical and government budget information in his presentation on the tribe’s operations.

“We’re getting a lot accomplished in a short amount of time with very limited resources,” Standing Bear said. “Working together is absolutely necessary, we define ourselves in that way.”

“We agree with the casino management and (Gaming Enterprise) board that we need to stay within those parameters to properly finance expansion of the Tulsa (Osage) Casino – our biggest money maker … We’re not sure how long we’re going to be capped, we’re trying to make it as brief as possible,” Standing Bear said. The ON Congress typically sets the next fiscal year’s projected revenue figure during the spring ahead of the fall Tzi-Zho Session when it sets the forthcoming fiscal year budgets for governmental operations. The 24-day spring Hun-Kah Session starts March 30.

The tribal revenue from gaming – as well as bank account interest and Tax Commission revenue including tobacco taxes and tribal tags for personal and commercial vehicles – is separate from the federal and state grant funding awarded to the Nation for departments and programs who apply for those funds to support their respective operations (i.e. Roads Department, WIC, Housing, etc.). Standing Bear said the Nation currently receives just over $19 million in grants per year.

Standing Bear said the Nation’s $30 million in the permanent fund remains two years after its establishment by Osage law. “What we do with that money is fund our priorities. We have the priorities, of course, of the education scholarship fund,” he said, adding 2,780 Osages are participating in the scholarship program this fiscal year.

Other priorities for Osages include the Nation’s health benefit card program and the burial assistance fund, which is administered by ON Constituent Services, Standing Bear said.

According to recent statistical data, Standing Bear said about 3,000 Osages live within the Osage Reservation; there is currenly about 19,000 total Osages enrolled; and about 9,000 Osages in Oklahoma outside the reservation.

Ongoing work includes efforts to save the Osage language, said Standing Bear, adding his office is looking at technology opportunities and he’s reached out to other tribes including Omaha regarding their language programs.

“We’re going to concentrate on the children,” Standing Bear said, adding efforts are under way to explore an Osage language immersion program for children. “There’s only 19,000 of us, we’re not that many so we can take care of each other so let’s take the resources we’ve got, use them properly and plan for our future for all of us.”

Co-organizer Jake Heflin told the attendees: “I want to encourage each and every one of you: If you have a skill or a passion or something that’s a matter of expertise – something you believe will benefit our people, please make sure you contact (ON officials) and express your interest and desire to engage because it’s that passion and that drive you have as Osages that makes our Nation better.”

Congressional Speaker Maria Whitehorn said the Congress is preparing for the Hun-Kah Session. She also told the attendees she wanted to discuss the topic of jurisdiction issues because she is planning to introduce a Constitutional amendment during session which will change the language regarding the punishments the Nation (via the Judicial Branch court system) may issue in cases.

The current constitutional language says the Nation may prosecute people by sending them to jail for up to one year and/ or impose a $5,000 fine. “That is not in compliance with what the Tribal Law and Order Act of 2010 states,” Whitehorn said. She said the Violence Against Women Act law requires tribes to comply with the tribal law and order act, which prompted her proposed resolution that will be up for consideration.

Whitehorn said her proposed amendment seeks to amend the Constitution stating the Nation will prosecute offenders, stating “we will prosecute whatever federal law allows.”

Buffalohead said she is working on legislation, which would set into law an updated Osage preference hiring to include hiring non-Osages who have Osage spouses and have legal custody to raise Osage children.

Maker said he hopes the Nation can increase the scholarship program in the future because he believes it’s important to help get Osages educated. A former ON language teacher, Maker also took questions from the attendees regarding culture.

Attendee Amanda Best said she appreciates her Osage heritage and told the ON officials she wants more opportunities to learn about Osage language and culture even though relocation to Oklahoma isn’t an option for her.

Maker echoed Standing Bear’s comments that the Nation is looking for ways to keep Osage culture preserved. “We want all of our people to have access to all of our culture, our language – it’s so critical for us to keep our culture and it’s also in our Constitution, we swore an oath to preserve it,” Maker said.

The meeting was also dedicated to long-time meeting attendee Mary “Shelley” Sloan who passed away last November. A regular attendee at UOSC and Northern California Osage meetings in recent years, Sloan was a former UOSC secretary.

Also on March 7, Clavier and Heflin recognized former UOSC Chairman Bill Myers and his wife Charlene Myers for their longtime efforts in organizing the meetings.

“The honoring which was bestowed upon me was an unexpected pleasure. Greg and Jake are a class act,” Myers said. “Having served as Chairman of the UOSC for 6 years (2008 to 2014) was an honor. I am very thankful for the guidance received from the Claviers, especially Mrs. Rachel Clavier. Having had the chance to have individual contact with many Osages was also a highlight. It is so important to keep that personal connection with our Osage leaders and our Osage culture. The only regret is not having more hands-on crafts for the UOSC members. Bead and ribbon work, moccasin making and finger weaving are some examples.”

Myers stepped down from the chairman post last year for health reasons and visited with Heflin and Clavier about transferring leadership. “Under Jake and Greg’s leadership the club will reach more California Osages then ever before. They are well connected, highly skilled and devoted to the Osage culture. The club will enjoy great success under their leadership,” he said.