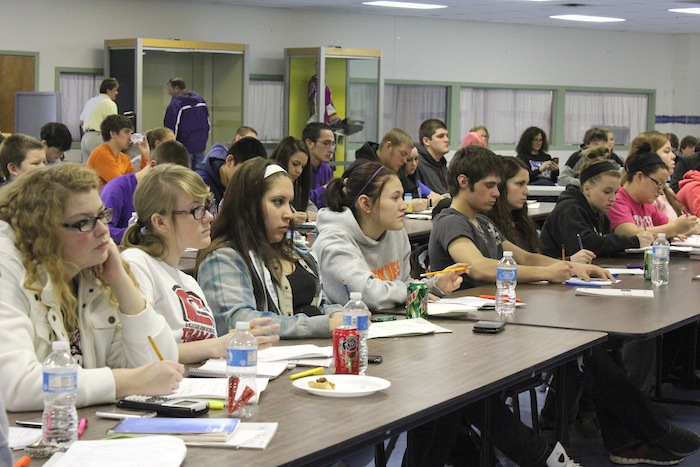 The Osage Nation will no longer administer its own scholarship. Principal Chief Geoffrey Standing Bear said as long as he is chief the Osage Nation Higher Education Scholarship will be contracted out to a third party.

The third party is Scholarship America. Suggested by a friend of Congresswoman Shannon Edwards, the company is a non-profit private-sector scholarship and educational company headquartered in Minneapolis, Minn. It manages more than 1,300 programs and will manage all communications, document processing, applicant evaluation and payments for the Nation’s roughly 1,200 scholarship recipients.

The contract is for $123,500 and is for technical services to implement and set up management in its first year, according to Standing Bear. The contract was signed on Oct. 23, 2014 and is year-to-year and the company boasts a 94 percent retention rate among its 130 clients.

Standing Bear said it was always his plan to contract out the scholarship program once elected to office. The scholarship program is the most expensive tribally funded program next to the Health Benefit card. It requires a $5 million to $7 million appropriation each year and has been politically debated for years.

“Before I took office I had received many complaints, I mean, over 50 as a member of Congress about our scholarship program. I’d say it’s closer to a 100. It had to do with the money not getting there sometimes until near the end of the semester, it had to do with any part of administration of the scholarship you can imagine,” he said. “As a member of the legislature there’s nothing we can do about it because it was in the Executive Branch. When [I was elected chief] it was a priority. Instead of firing everybody, I thought a better way would be to contract this to a private company to administer and to use the six person staff that we have on other matters that are needed in education. I made those decisions before the company Scholarship America was even mentioned and I was hard and firm on it.”

Contracting with Scholarship America meant six individuals were going to be without a job or working somewhere else within the Nation. The transition had bumpy beginnings. The Nation has been administering a scholarship since the 30th Osage Tribal Council and the scholarship coordinator has always been Jennifer Holding, an Osage tribal member from Hominy.

The ON Higher Education Scholarship was first funded by the tribe’s Bingo profits under Principal Chief Charles Tillman. During the 31st Osage Tribal Council, gaming revenue came in. After gaming revenue began to supplement the scholarship the tribe began to offer incentive rewards for good grades. The scholarship was available to any Osage student who had a CDIB card since the tribe didn’t become the Osage Nation until 2006.

The Nation’s education department is located in Hominy and five of the six employees who administered the scholarship are Osage. They are Jennifer Holding, Farrah Boyd, Mary St. John, Alecia Hutchens, Courtney Dailey and Trevor Piearcy (Pawnee). All are from Hominy.

Standing Bear said it was never a plan so people could lose their jobs; it is a plan to provide better services. He said he wasn’t happy with the level of service offered to students and he was dismayed the department didn’t do more to find additional scholarships for their students. He said an answer he received after asking questions was if the law says we don’t have to do it then we’re not going to take that extra step.

“I am very frustrated with these views that I see have developed over the years in this bureaucracy. And we are going to change that and I can tell you right now the changes we are implementing are new,” Standing Bear said. “There is resistance within this bureaucracy to change. And I understand we have to be patient, to a point.

“This place is not about these people’s jobs, this place is about serving the Osage, and that is all we are here to do.”

The Education Department was blindsided by the change, according to a recording of the Congressional Education Committee meeting that took place on Oct. 23 of last year. Congressman William “Kugee” Supernaw said during the meeting he would rather have Osages administering the scholarship than the Nation’s money going to a company in Minnesota. Before their presentation, Scholarship America had been working for months off of information on the Nation’s scholarship program that was obtained by someone else other than the Education Department and the information was mostly negative.

Conducting the presentation to the Congress was Marilee Hedberg, Director of Sales for Scholarship America.

Scholarship America was founded in 1958 as a regional grass roots organization to help students achieve education after high school. After years of raising funds, other companies wanted Scholarship America to administer their scholarships because load was too great. In its 57 years the company has distributed more than $3.1 billion to more than two million students through its programs, according to scholarshipamerica.org. In 2013 more than $201.9 million in scholarship awards went to 102,059 students across the United States and in 124 countries. Their clients and programs range from individual small programs to very large corporate programs, scholarship programs, tuition reimbursement programs and more.

She said they had been informed of concerns with the Osage Nation’s program management, checks not arriving in a timely basis, students not completing applications. Their applications are online and a web portal is available for students.

“We have worked very hard over the years to develop protocols with applicants and parents to bridge the gap between technologies,” she said. “We use text, email reminders and they’re developing an App as well.”

They have very strict data protections in place for their high security clients. Excel reports will be produced to show the flow of the money and a program manager will be assigned specifically to the Nation along with a team of product managers to assist. They have 130 staff members at their operation center.

Ida Doyle, who is the Education Department director, said at the committee meeting the Nation’s scholarship program already provided everything Scholarship America provides. The education department provided text and email alerts, educational assessments, career assessments, links to other Native and non-Native scholarship opportunities available to students and they also have an online application process as well.

“We were invited to make a proposal. What you might get is an opportunity to do other things, that higher-level work, career planning maybe, to free you up for other things,” Hedberg said. “A reason a lot of other organizations come to us is their staffs are gummed up with this work and they want to be free to do higher level work. So you might get to do something more interesting because we’ll take the work off your hands.”

Congresswoman Edwards has sat on the Congressional Education Committee since she was first elected in 2006. She has chaired the committee numerous times and if Congress is discussing scholarships or the Health Benefit Card, Edwards is involved.

Doyle said about 48-58 percent of the scholarship recipients attend school in Oklahoma.

“A lot of them come into the office so we do a lot of hands-on counseling. If their staff is in Minnesota, I would have some concerns with our people that walk into the office and have those services available to them,” Doyle said.

Edwards countered and said 18 percent of the Nation’s total population lives within the reservation area and it’s “hard to know from that 82 percent but I don’t know how many of those go in state or out of state or what their tuition rates are.” She said a lot of students go to colleges with high tuition costs and some attend private schools and she hopes Scholarship America can track those statistics.

Hedberg said funds for books and tuition are sent directly to students, payment for tuition is sent directly to the school. Remaining money is sent to the student. Once a student requests payment their check is mailed in 2-3 days.

Chairman of the Congressional Education Committee and proud Hominy resident, Congressman John Maker, said in November of last year that he was very concerned for the Osage personnel affected by the change.

When the Osage News asked Standing Bear what would happen if Scholarship America failed, he said he would find another contractor.

It may have been a rough transition for the six employees, switching from their long-time jobs of administering scholarships for the Nation to other areas, but the Education Task Force has worked hard at making sure they are working somewhere they will hopefully be fulfilled, said Melvina Prather, chair of the task force.

Holding is now the Nation’s first-ever STEM Coordinator, which stands for Science, Technology, Engineering and Math. She will be developing lab projects, science fairs, encouraging enthusiasm for the subjects for Osages in grades 1st – 12th. It will require training and the task force will pay for all the supplies used at the science fairs.

Boyd is now the Education Advocate. Also a new position, she will be monitoring Osages in the classroom, working with teachers and developing afterschool-tutoring programs for the WahZhaZhi Youth Academies.

Piearcy is now the Education Advisor. He will be fielding calls from Osage Scholarship recipients and directing them to Scholarship America, he will also be helping with concurrent enrollment and undergraduate testing.

St. John and Hutchens say they are happy with their new jobs at Constituent Services and the transition has been very positive. Dailey said she knew her job was ending so she applied for the receptionist position at the Election Office and is happy working there. All three women now work in Pawhuska.

[Editor's Note: This article was corrected on April 2, 2015 to reflect the correct number of scholarship recipients.]