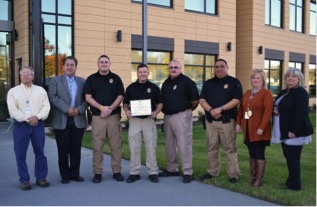 The Osage Nation Gaming Commission is acknowledging and commending the ON Police Department for its work in stopping a credit card fraud ring that is accountable for multiple thefts totaling more than $14,000.

On Nov. 4, Gaming Commission board members Marsha Harlan, Michael Kidder and Larraine Wilcox voted unanimously to send a letter of commendation to ONPD for their work efforts to stop criminal activity at the Nation’s seven-casino Gaming Enterprise, according to the meeting minutes.

A Nov. 10 news release stated the Gaming Commission notified ONPD of potential illegal activity one week prior and the ONPD formed a task force to investigate associated individuals identified by the Gaming Commission and immediately discovered a fraud ring that had already passed fraudulent credit cards and checks to other non-Osage casinos and other Tulsa businesses.

“It’s an ongoing investigation and there have been several arrests. At this point in time, there is $14,000 to $16,000 that has been accounted for as possibly lost through this fraud ring,” ONPD Chief Nick Williams said in the release. “We are also working with Tulsa County law enforcement and we are going to pursue federal indictments. That is all we can say at this time.”

Elizabeth Hembree, ONGC Acting Director, said in the release: “(An Osage Casino employee) had discovered some potentially fraudulent credit cards and persons who had been coming on (casino) property using various names to try and get money. Our cashiers and security officers had stopped them on different levels and we later found out they had been to a number of our other properties. I then called the Osage Nation Attorney General’s office for their assistance.”

The release stated that Assistant Attorney General Clint Patterson sent ONPD Investigator, Michael Kennedy, to meet with the casino management and the ONGC on Oct. 30 to begin the investigation. Kennedy said: “(ONPD) did conduct a sting on the fraudulent cards being used at Osage Casinos. We executed it beautifully and we were able to apprehend three people and apply charges such as fraudulent use of credit cards and impersonation.”