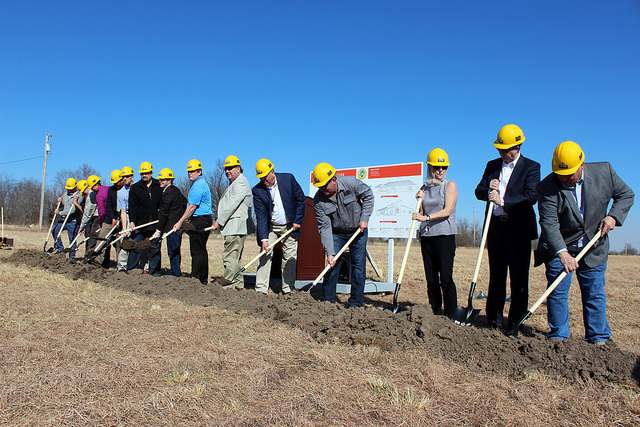 SKIATOOK, Okla. – Construction work is under way on the Osage Nation’s housing project southwest of downtown, which is expected to take one year to build.

When completed, Sky Lodge Estates will have 15 homes with three or four bedrooms, which will be rental or rent-to-own homes. The Nation’s Housing Program under the Tribal Works Department will be managing the housing and is also accepting applications for the homes.

Bruce Cass, director of the ON Tribal Development and Land Acquisition Department, recognized several entities that worked with the Nation on the housing project plans. “We know it takes a lot of effort to program, design and plan a project like this to get to this point,” he said.

Vann Bighorse, Wah-Zha-Zhi Cultural Center director, delivered the opening prayer and said the new housing is an opportunity for the Nation to provide a safe living environment for the people, especially children.

Principal Chief Geoffrey Standing Bear agreed and added: “We’re here to help that effort,” and said he hopes to see similar projects besides Skiatook’s. “They’re going to be looking over here as an example, we’re going to do everything we can to support whatever you all are doing,” he said.

The housing will be constructed in an undeveloped subdivision on 60 acres of land purchased by the Nation. The homes will be built with federal Native American Housing Assistance and Self Determination Act (NAHASDA) grant money awarded to the Nation.

Wayne Sims, administrator for HUD’s Southern Plains Office of Native American Programs, also attended the event. “Housing’s what we’re all about in our office… We’re certainly appreciative of those folks that come and build the units,” he said of the companies and officials, who are paid to plan, design and construct the housing.

The Nation worked with Native American-owned and Pawhuska-based planning, architectural, design firm Blue Star Studio Inc. on the housing plans. Blue Star Studio Co-founder Jon Red Corn (Osage) describes the homes as affordable and energy-efficient, which will bring lower utility bills for the future residents. Red Corn also said the homes will be handicap-accessible and his company took into design consideration that traditional Osage homes in the past had large living rooms. The houses will also have covered carports and storm shelters.

Chad Renfro (Osage), who owns his own design firm, worked on the interior design plans along with other area companies providing support including civil engineering and site survey work. Jenks-based and Native American-owned Maska Builders is the contractor working on the project construction.

Dan Yancey, Skiatook City Manager, said the Nation already has a “huge partnership” with the city and presence with the Nation’s nearby Osage Casino Hotel property and funding for area road projects through the ON Roads Department. “Skiatook wouldn’t be what it is if it wasn’t for the Osage Nation… so we appreciate your investment in Skiatook,” he said.

The ON housing program can be reached at (918) 287-5310. For more information on housing and to download applications, go online to: www.osagenation-nsn.gov/what-we-do/housing