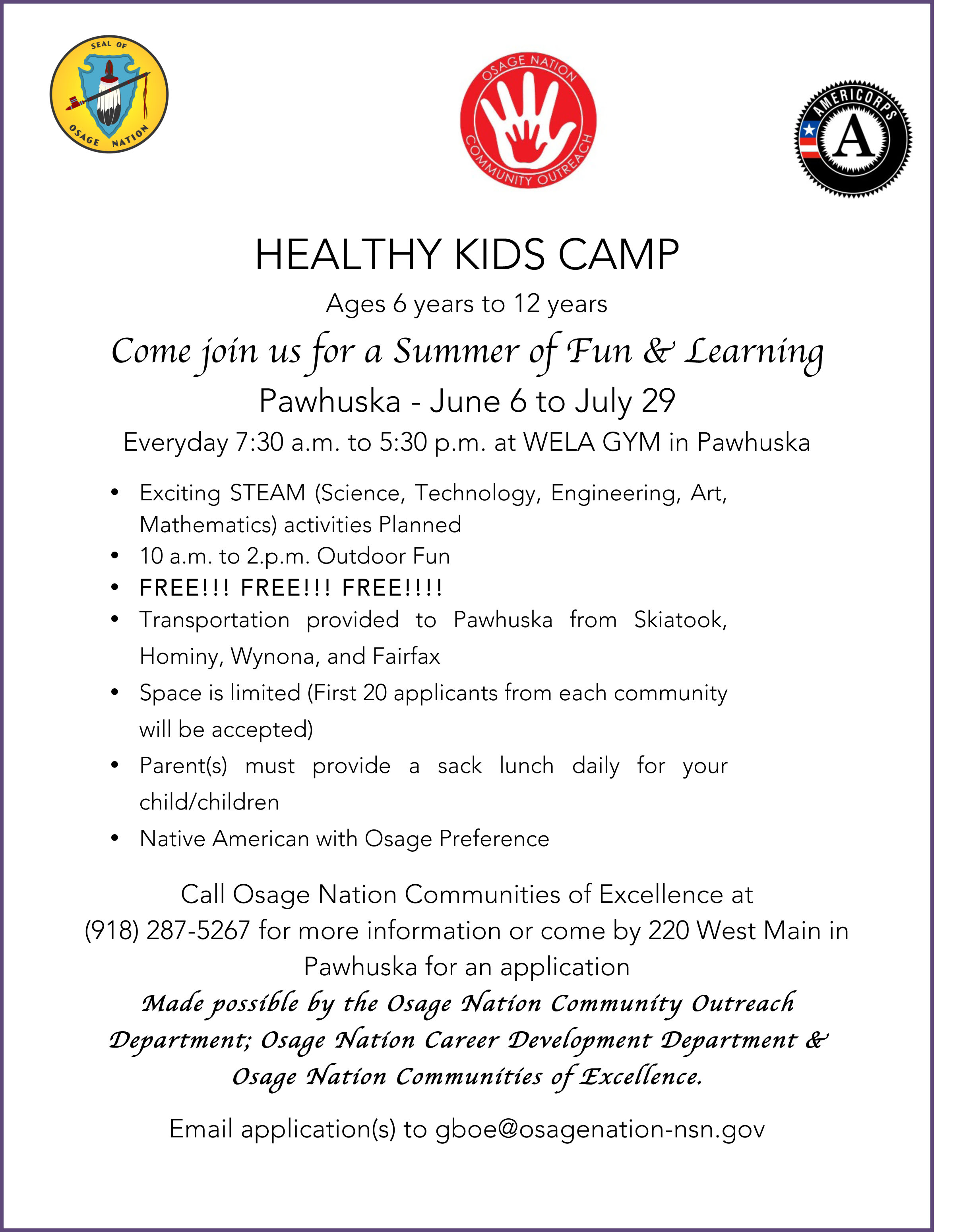 The Communities of Excellence announced today they are offering a free Healthy Kids Camp for ages 6 years to 12 years old, from June 6 to July 29 in Pawhuska.

The camp is free, and transportation will be provided from Skiatook, Hominy, Wynona and Fairfax to Pawhuska. The camp will begin every day at 7:30 a.m. and last until 5:30 p.m. and will be located at the WELA gym. Children will enjoy STEAM activities (Science, Technology, Engineering, Art and Mathematics) from 10 a.m. to 2 p.m. and outdoor fun.

Only the first 20 children from each community will be accepted and parents must provide a daily sack lunch for their children. Selection will be based on Native American with Osage preference.

The doors closed to the Pawhuska Wah-Zha-Zhi Youth Academy (WYA) on Friday, the Nation’s remaining after school youth facility. Plans to reopen for the 2016-2017 school year are contingent upon whether or not the Fifth Osage Nation Congress and Principal Chief Geoffrey Standing Bear can come to a compromise.

One concerned parent, who wished to remain anonymous, said their children are not eligible for day care because the Nation stopped providing day care to children over the age of 4. The parent said they did not have family to watch their children. The WYA program was their only option and without it they may have to miss work and potentially lose their job.

The youth academies are an after school program for Osage youth ages 5-18. Originally three academies, they shrunk to one after the ON Congress voted not to fund the facilities after daily rates caused attendance to drop from 400 students to less than 40. Congress also did not approve of the Executive Branch’s solution to cut costs by closing the Hominy and Fairfax facilities. The Fairfax and Hominy facilities closed in October of last year but the Executive Branch found the money to keep the Pawhuska WYA open.

Osage Nation Congressman RJ Walker told concerned parents in April he would consider sponsoring legislation to fix the WYA situation during a May special session of the ON Congress. But no legislation was introduced during the 13th Special Session, which lasted for one day on May 12.

Principal Chief Geoffrey Standing Bear, whose administration changed the Boys & Girls Clubs to the Wah-Zha-Zhi Youth Academies, said he is waiting for the outcome of the June 6 election.

“The plan has been to find six members of Congress to support it but because that did not happen we will wait to see what this election does,” Standing Bear said on May 11. “Yesterday, we began looking at a new plan for the fall. It may be WYA but if necessary, it may be an expanded WELA. Again, it depends on the outcome of this election.”

Questions about the WYA facilities and any potential summer plans for Osage youth were sent to the Education Department and were partly answered by Education Director Mary Wildcat. Director of Operations Casey Johnson and acting Education Services Coordinator Melvina Prather did not respond to requests for information.

Wildcat said that Pawhuska WYA employees found employment within the Nation and that the Pawhuska WYA served 40 children at its closure. She said they are also making sure the facilities will be ready to reopen in the fall with the proper maintenance to the buildings and grounds.

The only members of Congress who voted for Standing Bear’s WYA plans were Congressmen John Maker and R.J. Walker. The other members of Congress gave various reasons for not supporting it, such as no communication from the Executive Branch on the plan to run the facilities; legislation was filed too late during the Hun-Kah Session and as a result there wasn’t enough money for the after school facilities.

“It is your Osage constitutional duty: Article XVII, Osage Health, Education, and Welfare. Section 3: Care for our children: The Osage Nation shall provide for the care and safety of Osage children by establishing and promoting programs that contribute to protecting, nurturing, and developing the minds, bodies and spirits of our children.”

-       The Hominy Public Library has a summer reading program and monthly specials.

-       Woodland Public Schools has a food program. Children under 18 can eat lunch for free at the school.

The Osage In-Lon-Schka dances are throughout the month of June and are open to the public. No photos or videos of the actual dance are allowed.