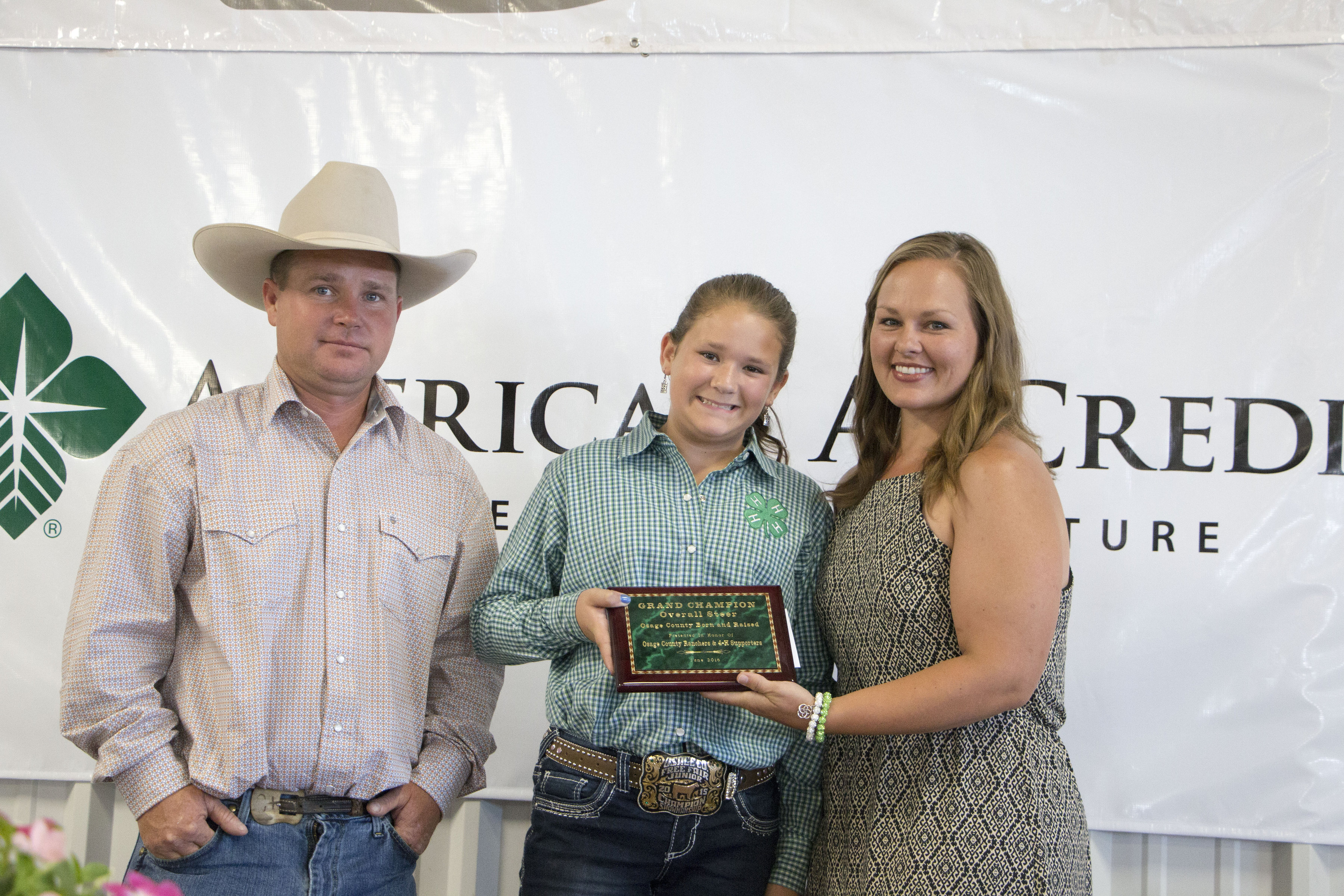 Annabelle Yates is an 11-year-old fifth grader at Pawhuska Elementary School. She is in her third year showing her cattle at the annual Osage County Livestock Show.

At this year’s show she was awarded Reserve Champion and placed third overall. The other two winners’ cattle were not Osage County born and raised and that bumped her steer up to Grand Champion, Overall Steer, and also earned her the coveted “County Born and Raised” award.

For the honor she was awarded $500 to go toward her next show project and she also received a plaque. She accepted the award at the 2016 Cattleman’s Hall of Fame Luncheon at the county fairgrounds on June 17.

“I was very excited to get the award for ‘County Born and Raised,’ myself and a lot of other kids worked hard on our 4-H calves and I feel fortunate to win,” Annabelle said. “I would like to thank Ernie Barnett and the Fryin Pan Ranch for my steer.”

For the past couple of years Yates has showed her own stock of cattle but this year her steer came from rancher Ernie Barnett of Osage County. The Simmental Steer,a breed of cattle originating from western Switzerland, weighed 1,415 pounds and its carcass weight was 862 pounds. Her steer had the highest points rating, based on those raised in Osage County in 2016.

“As parents of Annabelle, we are extremely proud of the hard work and effort she puts into her 4-H projects. Belle puts 100 percent commitment toward everything she gets involved in, whether it be sports or helping with chores around the ranch,” said her parents Andrew and Shelly Yates. They also said, “Belle is also active with the In-Lon-Schka dances each June.”

To win the born and raised contest, the steer must have been bred in Osage County and points are won for sale order and the carcass weight contest. This is a highly sought out award for those participating in 4-H and FFA.

“The County Born and Raised Contest has deep roots in Osage County. The ranchers in Osage County started the contest so that young people, like Annabelle, can see what kind of beef they are putting in the market,” said Jessica Jantzen, 4-H & Youth Development Educator.

The Osage County Cattleman’s Association gives prize money for hard work associated with raising a market steer from Osage County. They recognize five places and pay out in three places.

Annabelle is the daughter of Osage Minerals Councilman Andrew Yates and Shelly Yates. She is the granddaughter of the late Don Caldwell, Callie Caldwell and Papa O.J. Sweeden and Paul and Eva Coshehe Yates. Bell has two sisters, Katie and Josie Yates.