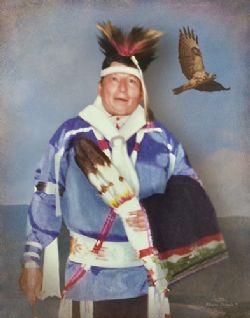 Joseph Leonard Cox, Sr. passed away Monday, August 29, 2016 at the Oklahoma Heart Hospital North in Oklahoma City, OK surrounded by his loving wife and family. “Leonard,” as he was known, obtained the age of 75.

Born March 9, 1941 in Shawnee, Oklahoma, his parents were Thomas Arthur Cox Sr. and Waunita “Dink” Kays Cox. He attended Fairfax High School and went on to college at Independence Community College and then to Pittsburg State University in Pittsburg, Kansas, where he earned a Bachelor, Master, and Specialist degrees. He later completed his doctoral work at Kansas State University in Manhattan, KS.

Working as a Grant and proposal writer for the tribe, he also enjoyed spending time with Family and always had a Good Story to tell. He also enjoyed fishing, hunting, camping in the R.V., playing guitar and was an active member of the Native American Church. He attended many cultural events and particularly enjoyed dancing. He was a tail dancer for many years and loved to hear the beat of the dance drums. His real joy was making people laugh and bringing joy to their lives through his stories and laughter.

He was preceded in death by his parents, one brother Thomas “Arthur” Cox, Jr. and two grandsons: Jesse Wayne Cox and Joseph Leonard Cox III.

His service is Thursday, September 1, 2016 at the Sacred Heart Catholic Church in Fairfax, OK under the direction of Hunsaker-Wooten Funeral Home. Interment will follow in the Fairfax City Cemetery.