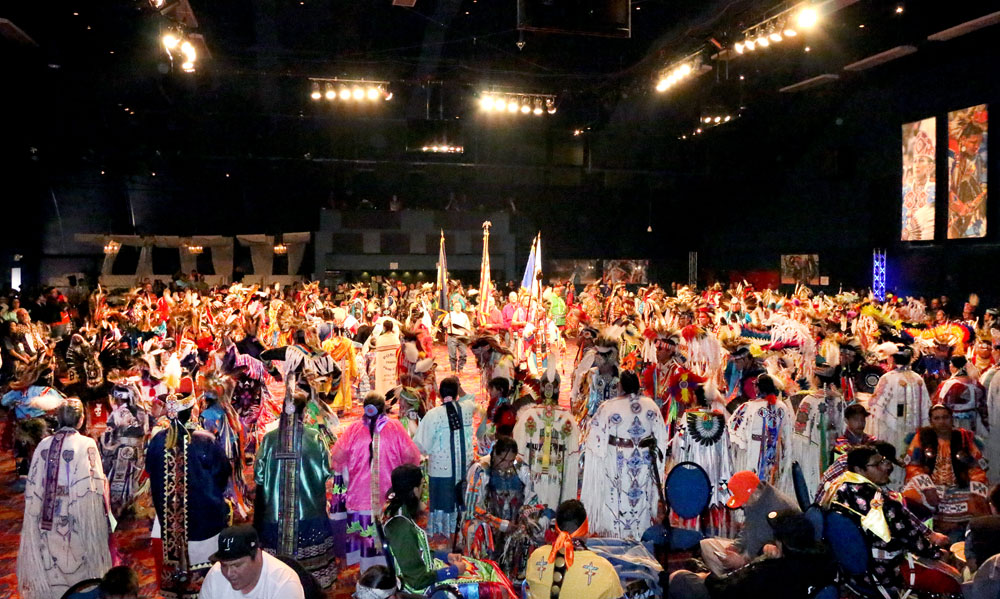 The inaugural Indian National Finals Powwow is shaping up to be the culmination of the powwow season, with big prize money bringing in dancers from the United States and Canada, each vying for the title of World Champion.

Approximately 1,000 dancers have registered, 11 drum groups have been selected, and nine places will be awarded. The powwow, which takes place in Las Vegas, Nov. 9-11 at the Cashman Center in the Fremont District, will coincide with the 41stAnnual Indian National Finals Rodeo – arguably one of the most attended events in Indian Country.

Each dancer has their own strengths when they compete. Much like a professional in any sport, the dancers have been competing at powwows all their lives – and winning. Some beginning since the time they could walk.

“I am going because it intrigues me,” said Goodwill, who is one of the best Buckskin dancers in the world. “I’m intrigued by the mass amount of interest for this powwow. I’m interested in seeing all the new beadwork, and excited to watch and be part of an event that everyone seems to be looking forward to!”

A dancer’s regalia is a big part of the competition. Although it is a dance competition, special attention is paid to what a dancer is wearing and dancers can be recognized by their style, color and quality of beadwork. Goodwill does her own beadwork and one of her former buckskin dresses is housed in the Smithsonian Institute’s National Museum of the American Indian in Washington, D.C.

Unlike most powwows, where it’s free to enter into a dance contest, INFP is charging each contestant $100 and they had to register by July. They get free admission, parking and a host hotel rate. INFP does not have a junior division or tiny tot division; it is only for adults (18 and over). The prize money for the winners is:

Winners will receive a leather jacket and a hand crafted sterling silver pendant for the men, and a bracelet for the women, according to the INFP website.

Also, the tribe who has the most winners at INFP will be awarded the “Overall Tribal Champion” award.

Tim Tall Chief, Osage and a well known Powwow and Rodeo emcee for 35 years, said the higher prize money at INFP changes the culture of the event and it raises it to a more professional and higher level.

He said Oklahoma dancers compete against large groups every summer and for instance, at the Otoe-Missouria Tribe’s annual powwow, Otoe Encampment, there could be three to four groups of southern cloth dancers.

“Well you know, some of the best dancers come from Oklahoma, but that’s just my own opinion,” Tall Chief said. “I expect at least two-thirds of the women’s category prize money to go back to Oklahoma or to an Oklahoma tribe.”

A Powwow way of life

For those who are not familiar with powwows, they are a gathering of Native people that celebrates fellowship, dancing and the healing sound of the drum. To many, it is also a way to honor loved ones and ancestors, said Lynetta Seward, president of the Intertribal Indian Club of Tulsa (IICOT). Seward is Loyal Shawnee/Ojibwe/Peoria/Osage.

A powwow isn’t an easy thing to put together. It takes a core group of volunteers that plan down to the last detail, Seward said. Every year she organizes committees to take care of the head staff (emcee, head man, head lady, head singer, color guard, etc.), vendors, concession stands, fundraising and other duties.

“We give out all money [we have raised] at the powwow every year. So we have to start from scratch every year. We go and ask for donations for [Indian] taco dinners, and our members donate. The taco dinners and smaller dances, vendor art fairs, all cost money to make a little in return,” she said. “Some of my meatpie Friday money goes into IICOT. It is work throughout the year, not just the weekend of the dance. We hit the streets getting donations and ads for the big dance in August each year. Without our members, it could not be possible.”

The drum and singing makes it possible so that each category has their own song they dance to, said John Arkeketa, Otoe-Missouria, a Traditional Dancer and singer. There are northern drums and southern drums and the singing styles and beats are different. A dancer has to know the difference and sometimes, a dancer has to know the song by heart in case there is a “trick song” played and the song stops at a specific place. If dancers don’t dance in beat or stop on time, they can be disqualified from the competition.

Some larger powwows can have up to 32 dance categories. Dancers travel from all over Indian Country to powwow and some follow the Powwow Circuit. The circuit begins in March with the Denver March Powwow, in Denver, Colo. When the month of April comes around, most dancers plan to attend the Gathering of Nations, which brings in over 1,000 dancers to Albuquerque, N.M. each year.

The powwow circuit resembles the rodeo circuit, where some competitors follow the circuit as a job, while others have jobs and can powwow on the weekends. Non-competitors also can make a living following the circuit by being a vendor, selling food, crafts, clothing and jewelry.

“I first remember going to powwows with my grandpa. Ever since I can remember I was with him going to powwows and gourd dancing with him; him getting me ready to dance, going to the same powwows every year. Seeing people, your relatives, friends, hearing good music from the singers,” Arkeketa said. “The outdoor powwows are the best to me, especially when people are at their camps cooking. It’s a really good atmosphere. I enjoy dancing, seeing my kids dance, dancing with my grandson, singing to him. I want him to have the same memories that I have of my grandpa – good ones. I miss him but when I go to the places we used to go together I have good memories of being there with him.”

With additional reporting from Chalene Toehay-Tartsah.