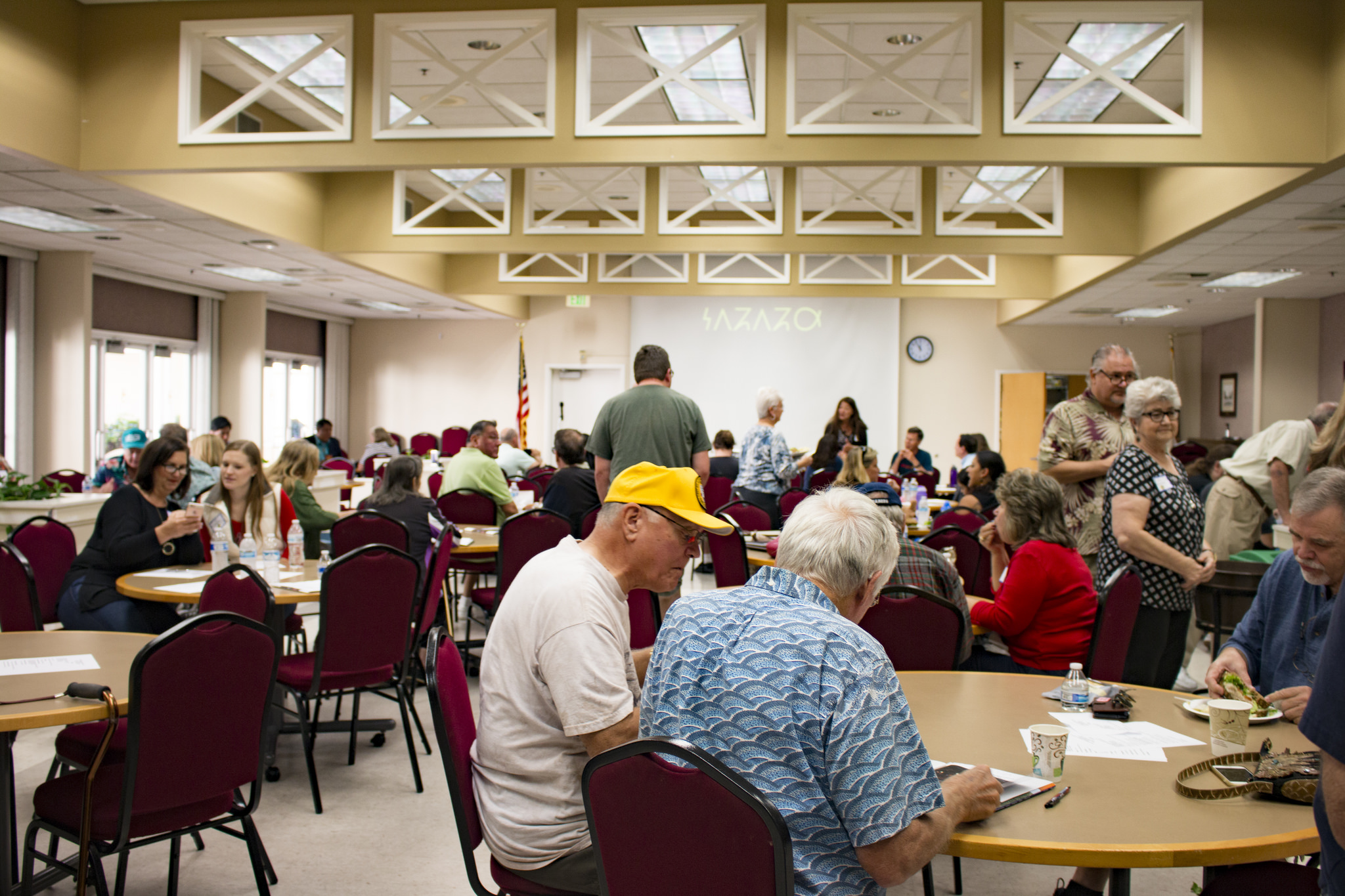 On Nov. 5, more than 60 people attended the UOSC meeting to hear from Osage Nation government officials who provided information on government services and recent developments. The event also serves as a fellowship opportunity for Osages who do not visit Oklahoma often to network with other Osages and to meet people who work for the Nation.

Principal Chief Geoffrey Standing Bear told the attendees there are approximately 20,000 enrolled Osages today who are descendants of those 2,229 Osage original allottees who signed the final Osage Tribe of Indians roll in 1906. Standing Bear noted if Osages ask around and talk to others “you will find that most of us are related in one way or another.”

Standing Bear said his office opened an “Osage Office of the Chief’s” Facebook page recently as another avenue to stay connected to constituents, as well as a Twitter account. His Twitter handle is @OsageKihekah. Both social media pages contain photos and information on government services.

On the legal side, Standing Bear said he is working with the ON Attorney General’s office on possibly revisiting the Osage reservation status case, which was declined by the U.S. Supreme Court in 2011. The Nation filed a federal suit against the Oklahoma Tax Commission on whether the Nation’s reservation was disestablished and carried on for 11 years in litigation. Standing Bear said the Nation is working on a new legal approach with new attorneys who could overturn the reservation status case.

On tribal government operations, Standing Bear said the Nation had over employees when he took office in 2014 and his administration has made efforts to reduce employees and pay more in salaries to those who are retained. He noted his Executive Branch appointed staff is on call 24 hours a day.

Standing Bear also acknowledged younger Osages who recently took jobs with the Nation that have increased the number of enrolled Osages working for the Nation. For example, he mentioned Hallie Winter and Cali Martin who both have prior museum experience and degrees from East Coast institutions and started working for the ON Museum as curator and collections manager respectively in the last two years. He also mentioned James Weigant, a former Tulsa city employee, who started in the Office of the Chiefs as an executive assistant and is now Deputy Chief of Staff.

In 28 months, Standing Bear said the Osage employee count increased from 37.3 percent to 52.7 percent today. “That’s moving pretty fast and respecting people who want to work… you’re there for the Osage people and for future generations,” he said of employees.

Congressional Speaker Angela Pratt delivered her inaugural Speaker’s report from the 2016 Tzi-Zho Session that ended in October after 25 days. She said the Fifth ON Congress appropriated $13,850,000 for direct services available to Osage constituents, which includes the higher education scholarship program, health benefit program and burial assistance.

Pratt, who is from the Hominy District and serves on the Cook Committee, also mentioned the district is discussing improvements to the village, which includes restoring the historic roundhouse next to the dance arbor. Pratt said the village community has discussed future improvements to the village and the consensus is the roundhouse will remain in place despite previous ideas to relocate the structure. She also noted drainage issues remain a priority due to flooding after rains.

Congresswoman Maria Whitehorn said the Attorney Generals Office has handheld copies of the amended Osage Constitution available at the Pawhuska office and distributed copies of the document to the UOSC attendees. She informed the attendees of the Nation’s first ever election – by legislative referendum – scheduled March 20, 2017 for two questions, which will be placed on the ballot.

The Osage voters will be voting on questions regarding same-sex marriage recognition by the Nation and whether to amend the Osage constitution to include language regarding the government budget.

Congresswoman Whitehorn sponsored a resolution to amend the Osage Nation Constitution, it passed unanimously. The question will be on the ballot for the special election. Voters will consider an amendment to Article VI, Section 23, of the Legislature and its duties of the Annual Budget.

The new language reads: “The annual budget of the Osage Nation shall be governed by the principles of transparency and accountability, and the budgetary process encompassing those principles shall be set forth in Osage law.”

Whitehorn’s amendment comes after a contentious Tzi-Zho Session where the Congress repeatedly asked for supporting documentation from Principal Chief Geoffrey Standing Bear to explain the Executive Branch’s budgets. Both branches are headed to court on the issue.

Check back to www.osagenews.org for more updates from the UOSC fall gathering.