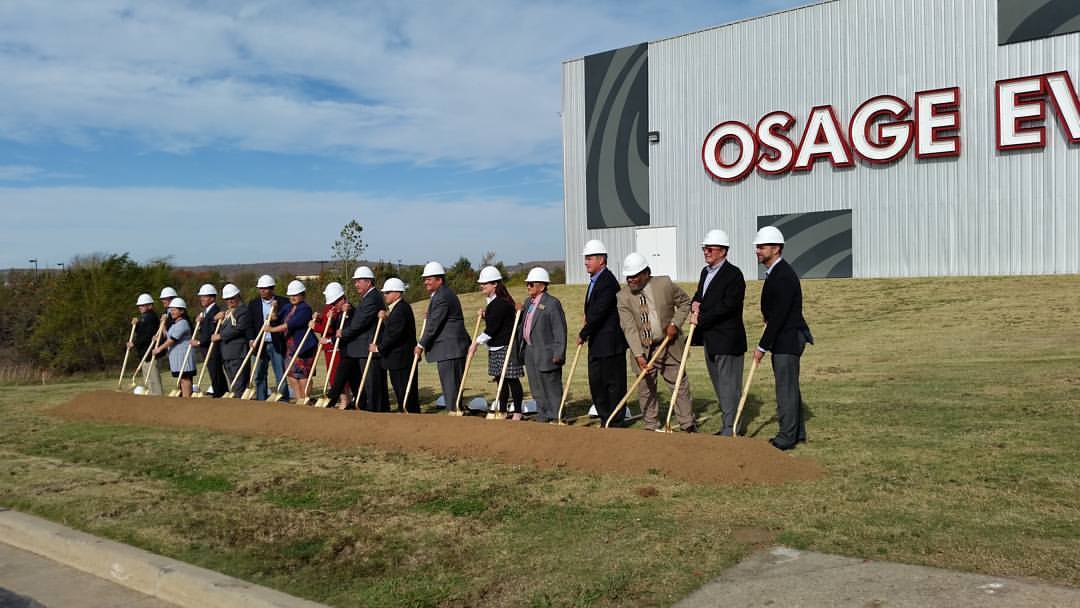 Osage Casino CEO Byron Bighorse called Nov. 17 “a special day” during the groundbreaking ceremony held that day under a white tent erected in front of the Osage Event Center next to the current Tulsa casino which opened in 2005. Plans call for the Event Center to be demolished as construction crews work around the current casino building to build a larger $150 million casino with a 126-room hotel and conference and special event amenities.

The current Tulsa casino will remain open during the construction project, which is expected to take 18 months. The casino expansion underway is the first of four phases that is a working project between gaming officials, casino management and architectural design professionals.

When construction is completed on the casino, hotel and conference space, Bighorse said there will be nearly 400,000 square feet of new property with casino amenities including 16 table games, five poker tables, 1,500 electronic games, a sports bar and grill, café and a full-service brew pub.

The new casino will take up 66,280 square feet and the hotel will have 126 rooms with six suites, as well as a fitness center, pool, 10,000 square-foot ballroom, three conference rooms and 25,000 square foot event space for multi-purposes, Bighorse said.

The current Tulsa casino employs 285 people, which will grow with 150 additional employees when the casino and hotel is completed.

Bighorse said he’s “thrilled to focus our efforts on continued improvement on our largest facility and flagship location in Tulsa. The creation of jobs will aid in economic development and expand tourism in our region helping us meet the mission of the Osage Nation.”

Principal Chief Geoffrey Standing Bear applauded the gaming officials present for the ceremony for overcoming the many challenges faced in putting together plans for the expansion project.

Congressional Speaker Angela Pratt said “this has been a long time coming, I’ve been involved in numerous discussions, meetings over the past 28 months … this plan has morphed over time but we’ve now arrived at something that the Osage Casinos and leaders of this Nation agree on and I’m very excited.”

Gaming Enterprise Board Chairman Mark Simms said “this has been a dream for all of us, we were given a big task and the board chose to promote Osages to the senior staff. With their hard work and dedication and their alliance with the board, this was not only done by professionalism and hard work, but with heart because we are working for the Osage Nation. If we made a profit, then the Osage Nation would be able to make a profit by providing services to our people and this is what we strive for.”

“We don’t want to make the same mistake other tribes have made and get ourselves so in debt that it could affect our other (tribal) programs, so we’re taking a very conservative approach,” he said.

“Now we’re in competition in Tulsa with the (Muscogee) Creek and Cherokee (nations),” Standing Bear said. “So what our gaming folks have done with all their market studies is find out what can we support realistically and let’s not overbuild because the whole goal here is to make profit.”

According to the Nation’s 2015 Gaming Enterprise Board annual report, the Tulsa casino made 41.8 percent in net gaming revenue during the 2015 fiscal year, making it the most profitable casino out of the seven Osage Casino properties. Coming in second is Sand Springs at 18.1 percent with the remaining order: Ponca City (13.4 percent), Skiatook (11 percent), Bartlesville (10.5 percent), Hominy (2.8 percent) and Pawhuska (2.4 percent).

The companies involved with the Tulsa expansion project are:

- Marnell Architecture: This Las Vegas-based firm designed the Tulsa expansion project and also designed the Skiatook and Ponca City casino and hotel properties which both opened in December 2013. The company’s portfolio includes projects at Caesar’s Palace and designing the Bellagio in Las Vegas. Marnell also designed the Sandia Pueblo’s hotel, conference center and golf course next to the New Mexico tribe’s casino north of Albuquerque.

- Crossland Construction Company: This Tulsa-based company will be the construction company for the Tulsa expansion project.

- Stonebridge Group LLC: This Tulsa-based and Native American-owned company will be the owner’s representative which will oversee construction of the expansion project.