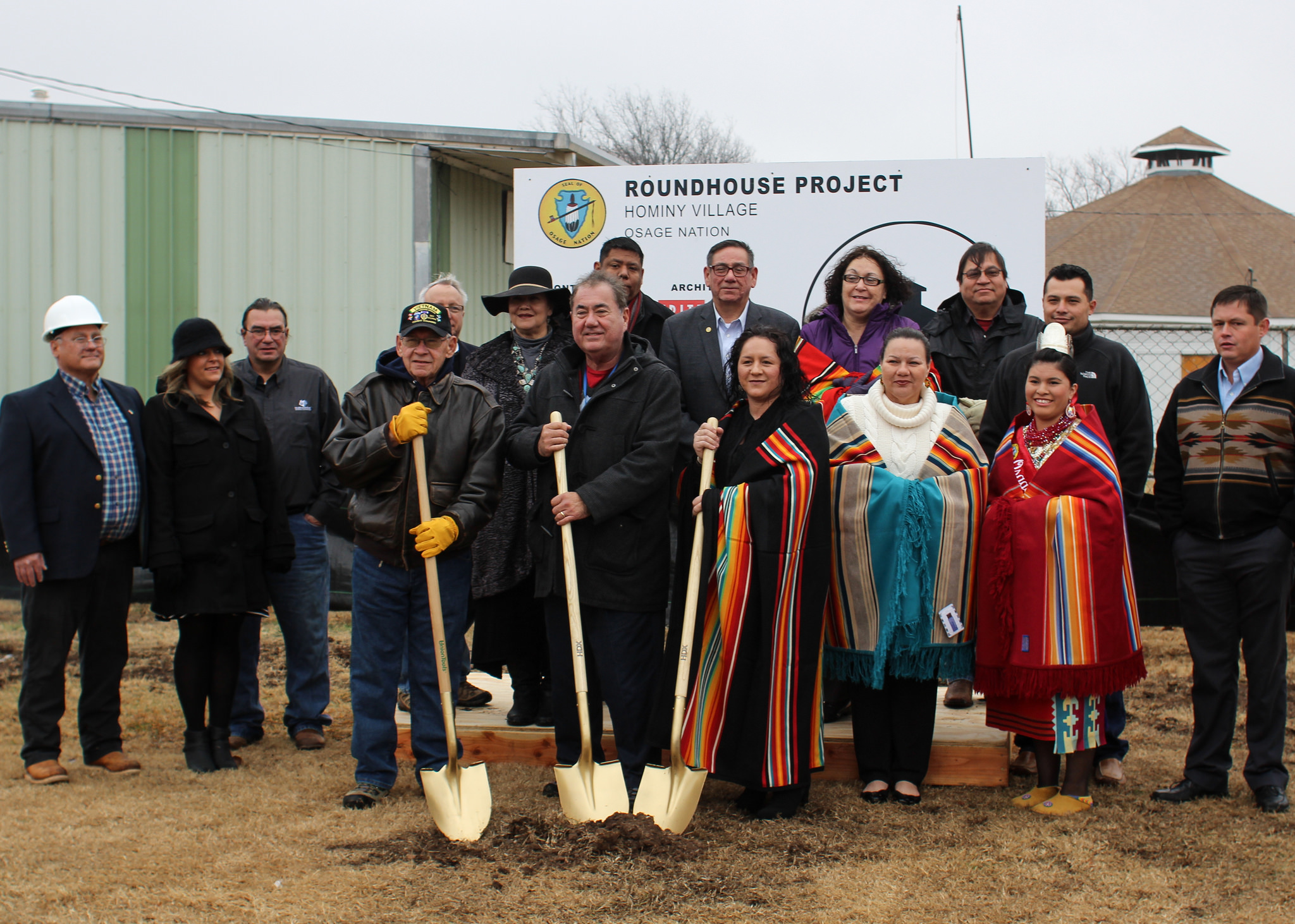 Osage Nation officials and Hominy District community members gathered for the official groundbreaking of what will be the complete restoration of the historic roundhouse in the Hominy Indian Village.

Due to the drizzle and cold temperatures that day, Hominy community members, the Hominy Five-Man Board and elected officials gathered in the community building in the village on Dec. 16. Hominy District In-Lon-Schka Head Committeeman, Steve Pratt, gave the prayer for the occasion and explained some of the significance of the round houses. He said the history is extensive.

“Tsi Da-Pa (round house), it’s a very significant part of our culture, about who we are. For one thing it’s the way that we’re structured. It’s round, that’s what they looked at, there’s no end, it goes forward. And that’s why when we dance, what we do, we follow this movement. It’s a movement that begins and that’s the way our people started,” Pratt said. “We’re seeing now that it’s continued on. And again, we appreciate the Chief and his vision that he wanted to move forward because it’s a really big part of who we are. It was the center of everything here, they were the center of all our villages, these round houses.”

He said he’s glad that future generations will be able to know that history. He said Osages have celebrated many events and occasions in the round house. For example, they would have Christmas parties and have E.He Ska (White whiskers, or Santa Clause) visit and give out presents. He said he has heard many stories from the community of how their families celebrated events and occasions in the round house, and that it was also a place to mourn after family members passed away.

Principal Chief Geoffrey Standing Bear, who is of the Pawhuska District, said his wife Julie is from the Hominy District and that being around the Hominy people for many years he knows they have strong ways and have their own way of doing things.

He said members of the Osage Congress from the Hominy District stood up and made sure Hominy had enough money to improve their village structures, such as the community building, the arbor and the roundhouse. There are also drainage issues and water issues that will be taken care of as well, he said.

An architect for the project, Whit Todd, said the roundhouse will be taken apart, board by board and rebuilt to its original state. What prompted the emergency for the renovation was that the roof was failing on the structure. The roundhouse is estimated to be over 100 years old.

“We decided to rebuild it to be a stronger structure that meets building codes of today,” he said.

Currently, the structure has asphalt shingles he estimates were put on sometime in the 1970s or 1980s, but they plan to replace the shingles with wood shingles. Wood shingles would have been on the building when it was originally constructed and that “it will look very close to what it originally looked like.” He said there was a lot of termite damage, wood rot and water damage, even to the benches inside. New benches will be built and undamaged wood from the original structure will be reused. Once completed the whole structure will move up close to 7 to 8 inches, to a foot, he said.

“It will be in the exact same location and we’re taking the top 10 inches of dirt in the roundhouse (the floor people danced on), stockpiling it and preserving it, and when finished the dirt will be brought back in. So, the dirt that has always been in the roundhouse will be put back,” Todd said. “It will be a wonderful structure when its finished.”

The Congress passed the appropriation of $410,000 for the roundhouse restoration earlier this year.

The money was appropriated to the Nation’s capital asset and improvement fund. Whitehorn sponsored the bill.

The roundhouse was built in the early 1900s and helps fulfill the wishes listed in the 1964 Hominy Village constitution, signed by the first village committee whose members were Leroy Logan Sr., Jerome Barnes, Marguerite Waller, Viola Deroin and Lucille Roubedoux.