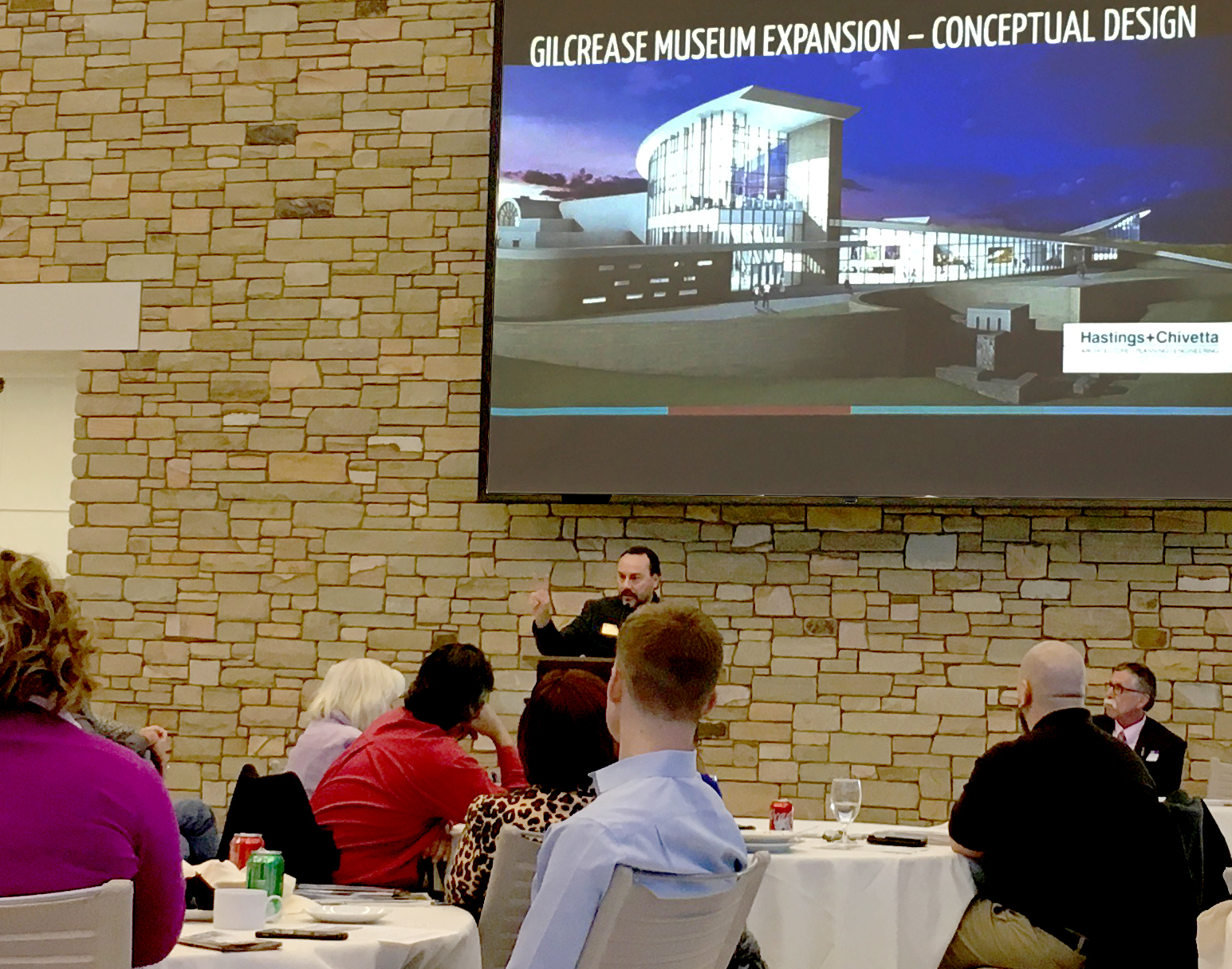 One thing is certain; Osage County is a beautiful and rich place. Full of cowboys and Indians, a Food Network star, beautiful works of art and priceless treasures, and a Tallgrass Prairie the last of its kind.

The think tanks of Osage County’s tourism machine met for a forum on Jan. 27 at the Gilcrease Museum. The museum, located four minutes from downtown Tulsa within Osage County boundaries, boasts one of the top five American Art collections in the country, said James Pepper Henry, museum director. It also contains an original copy of the Declaration of Independence, the only known copy to exist and personally signed by Benjamin Franklin.

“Last year we acquired the Bob Dylan archive; we have all of his writings here,” he said. Dylan won the Nobel Prize for Literature in October of last year.

The museum has a vast collection of art, archives and Native American artifacts and only one percent of it is on display, he said, the other 99 percent is in the basement. He plans to change that by expanding the museum by 119,000 square feet.

Henry, a Kaw Nation tribal member, said he deeply respects the Osage. His great-grandfather was one of the original four Kaw men who brought the In-Lon-Schka drum to the Hominy District and he is honored to dance at the In-Lon-Schka every year, he said.

The expansion of the museum will include a new grand entry and great hall, a Children’s Discovery Space, State of the Art Traveling Exhibition Space, expanded permanent exhibition space, a new café and coffee shop, new museum shop, expanded restrooms and facilities, and a dedicated school bus drop-off.

The museum is housed on 460 acres and they plan to develop trails, an outdoor amphitheater, play areas, parking and ponds and gardens, he said.

Henry hopes to cut the ribbon on the expanded facility in 2022.

Director of Strategic Planning for the Woolaroc Museum & Wildlife Preserve, Kaci Fouts, said the museum sits on 3,700-acres where bison, longhorns, deer and other wildlife roam free. The museum itself is 50,000 square feet and houses western art and Native American artifacts.

Events coming up include:

Located just northeast of Pawhuska is the Joseph H. Williams Tallgrass Prairie Preserve. It sits on 39,650 acres and is the last tallgrass prairie left on earth. More than 2,500 free-ranging bison roam the preserve and visitors can check out the Tallgrass Prairie Ecological Research Station, visit a scenic turnout, walk one of the hiking trails or visit the visitor center and gift shop (open only March 1 through Dec. 15).

Hunting, fishing, camping, dogs and off-roading are not allowed on the preserve. But bird watching and relaxation are welcome.

The Nature Conservancy is currently restoring the cabin of John Joseph Mathews, famous Osage historian and author of such books as “Wah’Kon-Tah,” “Talking to the Moon,” and “The Osage: Children of the Middle Waters.”

According to the TNC website, they hope to have the cabin restored for public visitation on a limited basis.

Bruce Carter, owner of Tallgrass Gallery in downtown Pawhuska, has formed Tallgrass Tours. According to its website, the company can plan a one day or two-day tour excursion, customized to fit your group’s needs. The tour includes historic downtown Pawhuska, home to Ree Drummond’s The Mercantile, the Tallgrass Prairie Preserve and other area attractions such as the Osage Nation Museum, Woolaroc and Gilcrease Museum.

Carter said he sold out a tour group from Wichita in two days and he has tours coming soon from Oklahoma City; Kansas City, Mo.; and Fort Smith, Ark.

Cali Martin, ONM Collections Manager, invited forum attendees to visit the rebranded and “revitalized” museum. She said since the summer of 2015 they have installed a gas fire suppression system, new security system, they have a secure collections room, and they are working with the Tulsa Historical Society to have a room within the THS. They hope to have more visitors from Tulsa in the future, she said.

An ongoing exhibit is Wah-Zha-Zhi Spirit: A Celebration of Osage History and Culture. The museum staff is currently preparing for the opening of its newest exhibit, Enduring Images: Osage Photographic Portraiture. The opening is set for Feb. 23, 4-6 p.m. and the exhibit will run until Aug. 26.

Martin said the staff is also working on acquiring the works of the late Osage artist Gina Gray, for an artist’s retrospective of her work.

Past exhibits include Highlights of the Collection: Treasures of the Osage Nation and Carl Ponca: A Retrospective.