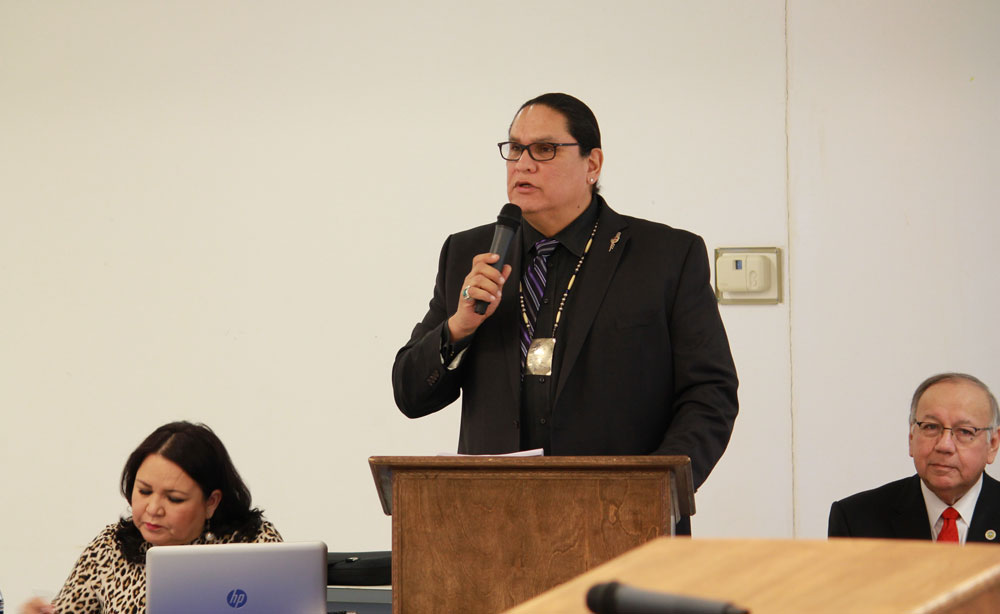 PAWNEE, Okla. – The tribes of the United Indian Nations of Oklahoma, Kansas and Texas met for their quarterly meeting on Jan. 30 to discuss what changes may be coming under the Trump administration.

Ernie Stevens Jr., Chair of the National Indian Gaming Association and a longtime advocate for tribal sovereignty, gave a “national update” to the more than 50 tribal representatives present at the Pawnee Wellness Center.

He said “three bright spots” tribes need to be aware of in terms of friends to Indian Country are U.S. Representatives MarkWayne Mullin and Tom Cole, and the new Secretary of Interior Ryan Zinke.

“I think we’re off to a great start there,” Stevens said. “It’s time to get over the shock. Yes, Donald Trump is our president and yes, there are some challenges, but I think in Indian Country what we’re trying to do is not look historically at his posture but look forward.”

He said it has been some time since he has had to work with a Republican majority, both in the House and the Senate, but on behalf of the NIGA “we are ready to take that head on and in fact, we have already started.”

Zinke reportedly attended the Native Nations Inaugural Ball at the National Museum of the American Indian on Jan. 20. Stevens said Zinke spoke with tribal leaders and staff for about two hours, hearing their concerns and important issues they wanted him to be briefed on. Zinke is an ex-Navy SEAL commander and was a freshman U.S. Representative from Montana when Trump nominated him for the position.

Mullin is an enrolled Cherokee, a third-term Republican congressman and member of the mostly-Republican Native American Coalition. Stevens said tribes have to remember to lobby their representatives and “tell them what we need, our strengths, where our weaknesses are and we need their help. It’s not a knock on them, it’s a responsibility on our shoulders. Mullin is the lead guy on that tribal transition team.”

Economic development, tax issues, healthcare and the Dakota Access Pipeline are all issues they are keeping an eye on, he said.

“Tom Cole, a key Native person that has worked very strong and been influential in (Washington) D.C. He’s not looked at as just a Congressman, but a person who understands his constituency, community and advocates on behalf of the United States of America. He’s on our side and understands what we need,” Stevens said.

Osage tribal member and UINOKT Secretary Margo Gray, asked Stevens if he was aware that the North Dakota state legislature just filed legislation against the tribes within their state in response to the ongoing protest of the Dakota Access Pipeline by the Standing Rock Sioux Tribe. “It’s alarming at most.”

Stevens said they’re still letting that “unravel” but they anticipated the actions by the North Dakota legislature.

“We have to provide an education to this new president, this new Congress and Senate, and that’s my message for today,” he said. “Education is the key, Indian folks are good at it, we wouldn’t be here today without the education we’ve received.”