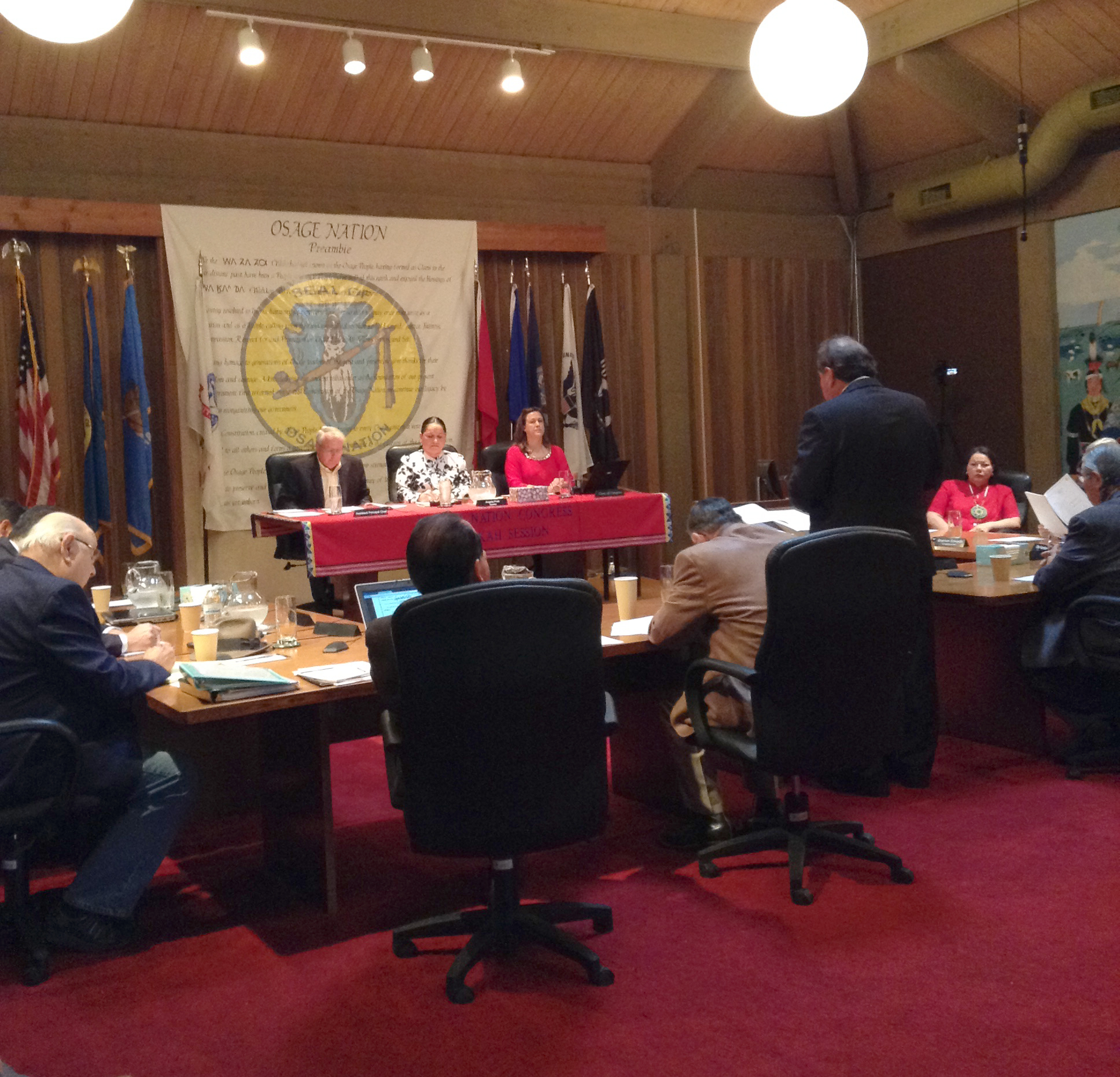 At the start of the 2017 Hun-Kah Session, Principal Chief Geoffrey Standing Bear informed the Fifth Osage Nation Congress of several items his office is presenting for consideration.

In his March 27 executive message, Standing Bear said the Executive Branch plans to bring budget modifications for Congressional consideration, including covering the ON Gaming Commission budget shortfall. “The Executive Branch is ready to work with your committees to provide the information needed for your legislation,” he said.

“After two weeks of analyzing revenue and expense reports, we have developed a detailed and comprehensive budget modification that should be finished and submitted to you within days. As a result of this effort, all funds needed to meet the Osage Nation Gaming Commission’s needs can be provided through budget modifications alone,” Standing Bear said.

Standing Bear said two separate budget modifications would be presented during the spring legislative session to “address mid-year requirements for Food Distribution and Communities of Excellence.”

Also, regarding funding, Standing Bear told the Congress: “I am glad to report that you can increase the amount of projected revenue by at least $1.4 million from funds accumulated by our Osage Tax Commission.” The Congress will discuss and set the 2018 fiscal year projected revenue figure during the Hun-Kah Session. The issue will be initially considered at the Congressional Appropriations Committee level before the 12-member Congress votes to set the figure. Per the 2006 Osage Constitution, the annual budgets cannot exceed the projected revenues. The FY 2018 budgets will be considered during the Tzi-Zho Session in September.

With regard to the Nation-owned 43,000-acre Bluestem Ranch, Standing Bear said he submitted “the leases prepared for use of Bluestem Ranch for your approval, but not by waiving any provision of this Constitution. I am doing this only to find a compromise. I will take it one step further – If you approve leases with different terms that are still within the law, I will sign them. My hope is you will talk to the people who worked on these leases and determine that what we’ve submitted is in the best interest of the Osage Nation.”

In February, the Executive Branch announced three leases awarded to the Bluestem Ranch LLC Board, the Alred Family (Osage) and George Neff (Osage).

The ranch lease business is being considered by the Commerce, Gaming and Land Committee in executive sessions to discuss business and proprietary matters of the leases.

“I anticipate much discussion,” Pratt said. She believes there will be several committee meetings held to discuss several legislative matters, including the filed appropriation bills and the ranch lease business. Pratt went through a rundown of bills and resolutions filed thus far.

“I would like to remind my colleagues, myself included, as we begin our Hun-Kah Session, which is the first (regular) session of the year … I just want to remind everyone, as we speak of the Tzi-Zho and Hun-Kah Session, it addresses the ancient moiety of the balance of Earth and the Sky and that is often what is needed within the Osage Nation is balance,” she said, adding she is asking all Congress members to conduct themselves respectfully, including waiting to be recognized during the session, which stretches 24 days to April 24. If needed, the Congress may also extend session by three extra days with two-thirds approval.