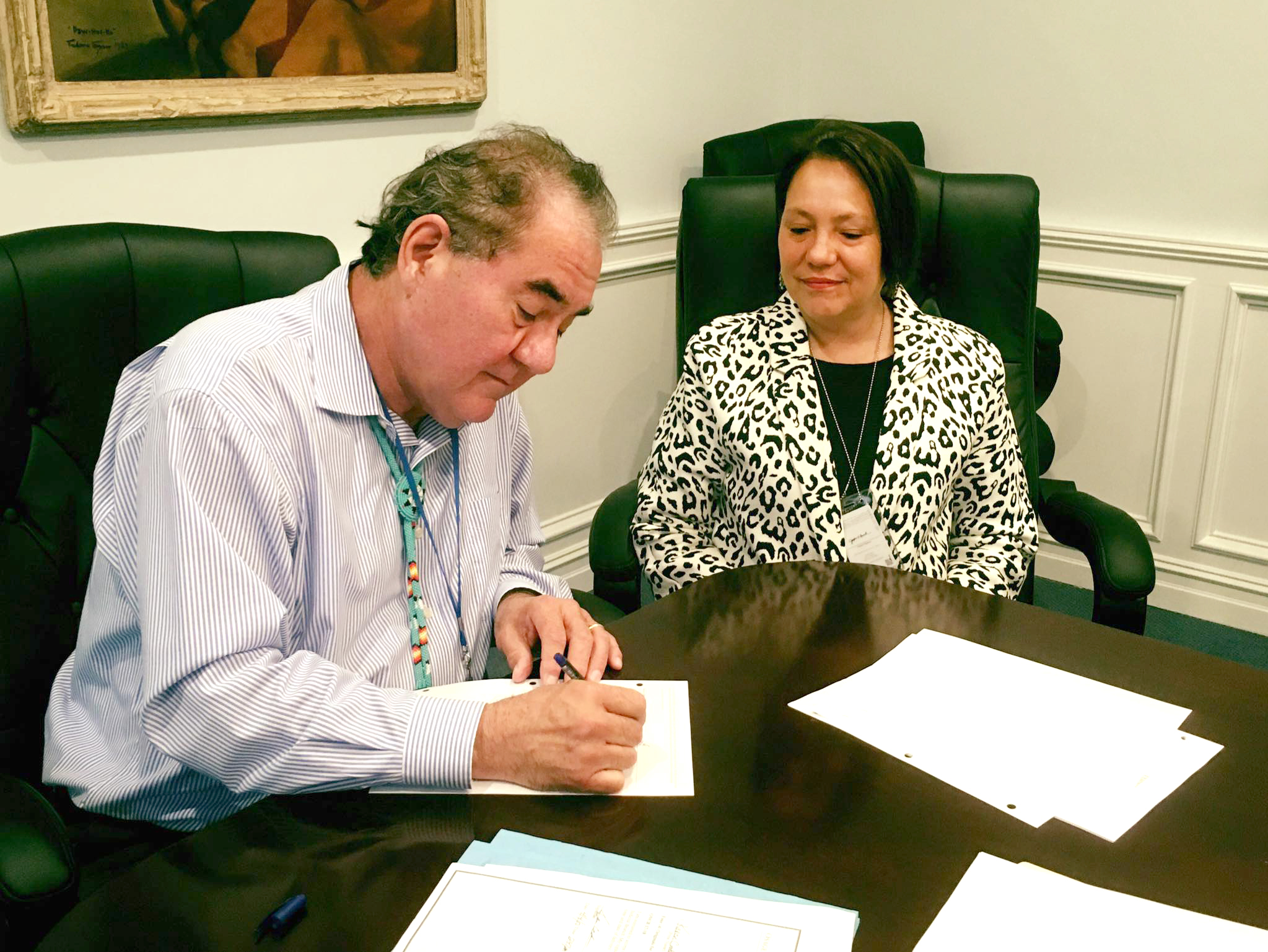 After a year of back and forth between the Osage Nation Chiefs Office, the Osage Nation Congress and the Bluestem Ranch LLC board, Principal Chief Geoffrey Standing Bear signed a 42,300-acre lease with the ranch board.

“Now that the Nation has signed a lease with the board, we will be able to begin implementing some of the activities we identified in our Management plan that we created and established last May,” wrote Faren Anderson, chair of the Bluestem Ranch LLC board, in an April 20 email. “Some of the short-term priorities of the Bluestem Ranch management plan include: establishing a herd of animals (cows and bison) that are owned by the Nation, identifying activities within the ranch that will enable tribal activities and use of the ranch, create a self-sustaining business that will generate a profit and a distribution to the Nation, and identify profitable opportunities that the ranch can sustain.”

The Congress unanimously passed a resolution in support of the ranch board last year. After the Nation purchased the 43,000-acre ranch for $74 million from media mogul Ted Turner in 2016, both the Executive and Legislative branches agreed the ranch board would run the ranch. However, around July of 2016, Standing Bear began making plans for the ranch without board input.

Standing Bear said he will continue to work with the board since they are a company overseeing a major asset of the Osage Nation government. The Bluestem Ranch LLC is a subsidiary of the Nation’s Tallgrass Economic Development LLC.

He signed the lease on the morning of April 5 in his Executive Conference Room. Chief of Staff Jason Zaun and Deputy Director of Operations Jodie Revard served as witnesses.

“A lot of people forget we did not take possession of the Bluestem Ranch until Nov. 1, 2016, and there were existing leases on the ranch. We have had to terminate those leases and transition those lease holders off the ranch. One of the first things we did was have Bluestem Ranch LLC occupy 9,000 acres during this transition,” he said. “I signed this lease because it was 11-1 [Congressional vote], and I want to compromise.”

Making up the five-member ranch board is Anderson, Vice Chair Jim Perrier, Treasurer Teresa Meade, Secretary Jackie Badley and Francis Murphy. Murphy’s one-year term ended this month and Standing Bear said he is considering appointments to fill his spot on the board.

The ranch board holds regularly scheduled public meetings every month. Their next meeting is May 9.

Standing Bear said his administration had planned to hold public education activities for all ages, coordinating with the Nation’s Historic Preservation Office. They planned to open it up for tribal members to hunt and fish, establish an American Burying Beetle refuge to sell credits per acre to oil producers and assist them with their Environmental Assessments so they can drill, create a WahZhaZhe Nature Preserve to return the lands to its original grasslands, and they were planning on creating an Osage Language Immersion Center in one of the empty homes on the property.

The ranch board has not finalized any plans moving forward yet.

The lease is for 25 years at $1 per acre for $42,300 per year, to be paid to the Nation. The lease begins on May 1 and ends on April 30, 2042. According to the three-page Land Management, Farming & Grazing Lease, the ranch board agrees to make capital improvements in the form of fences, weed and brush control, wildfire prevention, control and personnel, improvement and construction of structures and management of a bison preserve – valued at $250,000 in the first year, and $500,000 in the following years.

According to the lease, all revenue generated by the ranch will stay with the ranch board. The ranch board is free to work with the Nation’s departments on grants, partnerships and anything else related to the betterment of the ranch.

The board has the right to sublease the land on the ranch, and all subleases are required to be bonded, or sublessees must submit a letter of credit. The ranch board cannot interfere with oil and gas operations on the ranch, according to the lease. The board must implement a weed control program as part of the grassland management and the lease allows for controlled burns on the land, something the board has wanted.

The lease gives the board control of the grazing, hunting, fishing and other general ranch activities, “whether for profit, public enjoyment, public education or land maintenance.” The lease also stipulates the ranch board have good faith discussions with Nation officials about “location and sizes of the parcels of land to meet these public uses” and those will be decided by the ranch board.

The lease does not stipulate if or when the ranch board will distribute proceeds made from the ranch to the Nation.

The Fifth Osage Nation Congress voted on April 4 to approve the lease for the ranch board by resolution. The lone “no” vote came from Congresswoman Shannon Edwards.

“In closed-door meetings, the Congressional Commerce Committee rejected both the Chief’s land use proposals and the opportunity for the People to participate in the regular committee process,” Edwards wrote in an April 5 email. “The $67 million ranch loan requires about $2.7 million in interest payments quarterly for five or more years. That doesn’t even include principal payments. It isn’t hard to do the math and determine that a $43,000 annual lease payment for the entire 43,000-acre ranch is not going to touch that debt, much less provide revenue for services. An open-ended 25-year lease on hope and good will, and short of detail and legal protections for the Nation, is too big a risk to support. The lessons of Osage, LLC, seem to have already been forgotten.”

The Nation lost approximately $19 million with the defunct Osage LLC.

Osage Casinos CFO, Tim Steinke, said in an April 21 email that although he couldn’t comment as to Edwards opinion about the ranch lease, he said her financial information wasn’t quite accurate. He wrote, the $2.7 million is required “in quarterly debt service payments, which includes both principal and interest payments for five or more years. Quarter principal payments since the ranch loan commenced on June 8, 2016, has reduced the balance to $59.5 million as of April 3, 2017.”

Although Neff’s lease was not approved by the Congress, the Bluestem Ranch board approved a lease for Neff for approximately 16,000 acres at an April 11 meeting.

“I’ve been awarded enough country to run 4,000 steers for 115 days ... which equates to about 4 acres per steer,” Neff said. “I’ve been in continuous contact with the [ranch] board all through this process ... I don’t know exactly all the pastures I’m going to get it at this point and it’s with the attorney and the employees are trying to figure out just exactly what they want me to have.

“It wasn’t originally the way we started, but it’s something at this point. The board is trying to still get a feel for things, and try to expand for the tribe in that aspect and figure out what country they’re going to need and if they want to expand their own operation,” Neff said.

Anderson wrote that the board plans to seek immediate opportunities to generate income for the ranch so as to enable it to be self-sustaining. The board’s immediate priorities include securing employees for the ranch and obtaining the necessary supplies and equipment for the upkeep of the ranch. She wrote that the “Bluestem Ranch LLC currently owns 799 cows, 665 calves, 50 bulls and 7 bison.”

“The history of ranching has proven that it is a business that can grow in time, but doesn't usually happen overnight. The long-term lease that has recently been engaged between the board and the Nation, will ensure that the Bluestem Ranch LLC has an opportunity to begin, grow and establish a herd of animals that will hopefully prove to be profitable and an asset,” Anderson wrote. “The board members look forward to using their combined years of experience and knowledge in ranching, managing, and business ownership to help create a profitable Osage Nation business that members will have something to be proud of.”

This article was updated on April 21 to reflect a comment from Osage Casinos CFO Tim Steinke about the loan for the Bluestem Ranch purchase.