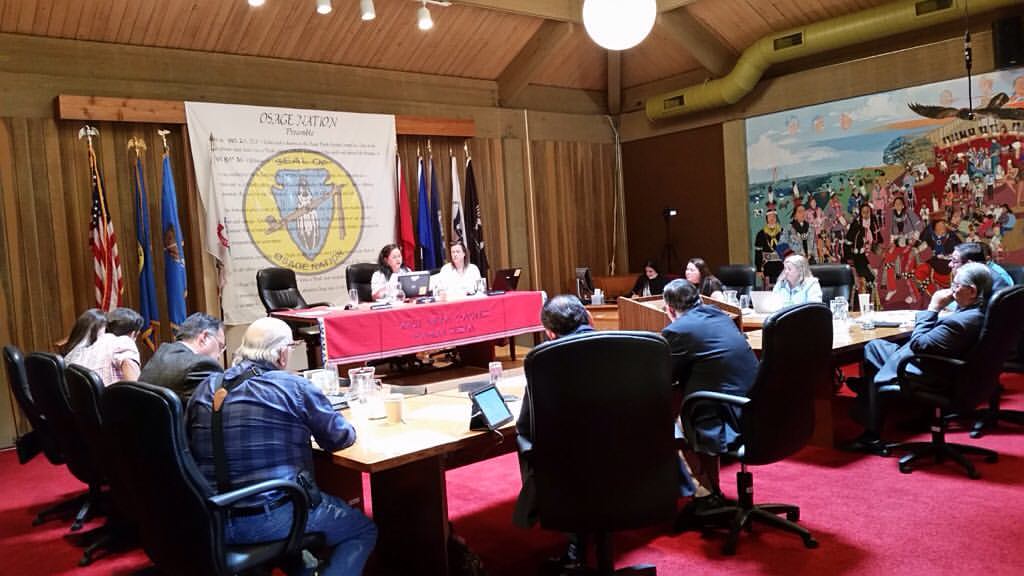 The Fifth Osage Nation Congress wrapped its 2017 Hun-Kah Session on April 24 and took care of annual Congressional business, which included electing officers and forming Congressional committees for a one-year term.

Angela Pratt will serve a second consecutive year as Congressional Speaker after the 12-member Legislative Branch re-elected her to the post. The Congress also unanimously elected Congresswoman Alice Buffalohead to serve as Second Speaker. Buffalohead previously served as Second Speaker in 2014 after the Fourth ON Congress took oaths of office.

Pratt delivered a closing report of the 24-day session activities before the session adjourned that afternoon. She thanked her Congressional colleagues for their “work and dedication to the Wah-Zha-Zhi Ni-Kah-Zhi (Osage People).”

“As we began this Hun-Kah Session, I spoke of the Hun-Kah and Tzi-Zho (sessions) and the Constitution states that the schedule shall be in honor of the ancient moiety division of Earth and Sky and it serves to remind all Osages of the responsibility to bring balance and harmony to the Nation.”

In her closing remarks, Pratt reported the following session statistics:

- Congress members sponsored and filed 48 bills and 12 resolutions and 13 were carried over from a previous session. Four of those bills were withdrawn by their sponsors.

- Two bills and one resolution were not passed by majority Congressional votes.

- The Congressional select and standing committees held a total of 49 meetings.

- A total of 21 individuals were appointed or reappointed for serving on ON boards and those people received confirmation votes from the Congress.

Pratt also thanked the Congressional office staff for their work efforts, which includes Congressional Clerk Shana Walker, Budget Analyst Eli Potts, and new Assistant Congressional Clerk Dana Murrell. “They all work really well together and roll with the punches and tasks that are given to them on a moment’s notice, so I sincerely appreciate you all,” she said.

The Congress members signed up for the various Congressional select and standing committees, which meet to initially consider legislation, budgets and other matters brought to the Congress. Those committees briefly met and selected their officers, as well. The newly formed select committees are:

- The Congressional Affairs Committee is chaired by the Second Speaker, according to the Congressional rules. With Buffalohead as chairwoman, other members are Shannon Edwards (vice chair), Otto Hamilton and Archie Mason.