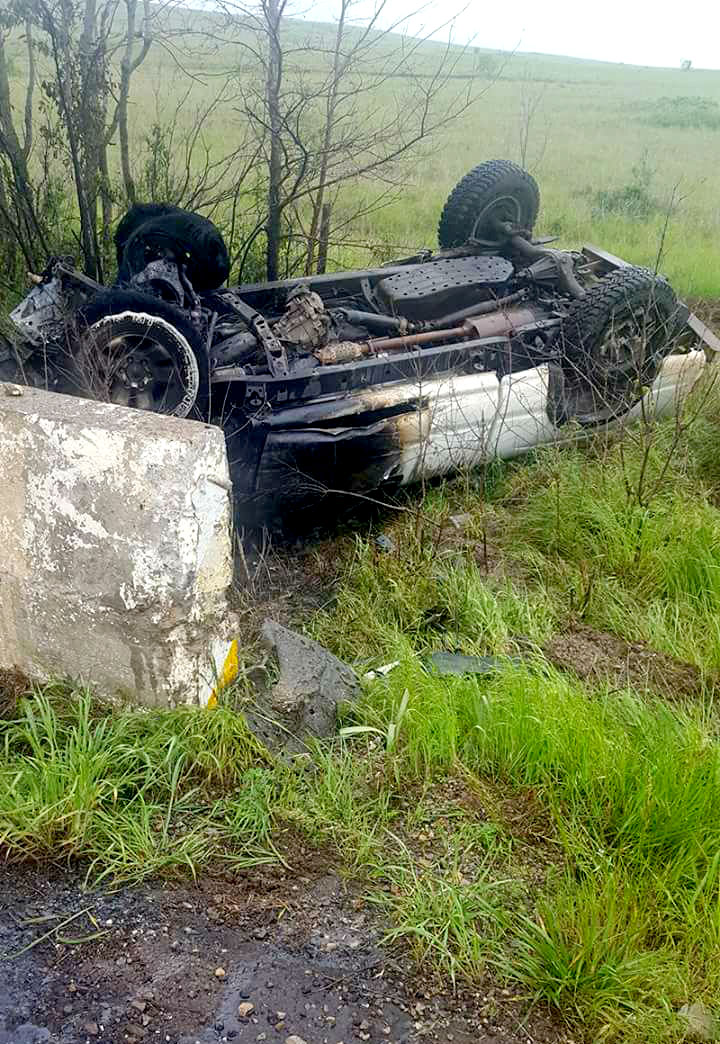 Thanks to John “Junior” Williams, the day of May 11, 2017, will be a day Melissa Radford will never forget. It was the day Williams pulled her from a burning vehicle and saved her life.

Radford, of Bartlesville, was driving to Pawhuska in the afternoon and taking the Okesa backroad for her drive when an animal crossed the road and she swerved to miss it. She thought she had time to correct but ended up hitting a cement culvert in her 2004 Toyota truck. Her truck flipped into a ditch and trapped her inside, rendering her unconscious.

Williams was on his way to Bartlesville to pick up his son from school and was running early, so he decided not to go his usual route of Highway 99 and chose to take the Okesa backroad. He was traveling with his two small children and grandson when he saw a plume of black smoke coming from a vehicle flipped over in the ditch. He saw a young man and woman standing beside the scene and rolled down his window to see if everything was alright.

They told Williams they had just seen the accident and had already called emergency services. Williams asked if anyone was in the vehicle because it was slowly catching on fire. They told him yes, a woman was inside the truck. Williams said he got out his cell phone and called his brother Nick Williams, who is the Osage Nation Chief of Police, and told his brother to hurry.

Williams said as soon as he hung up with his brother an explosion happened in the engine of the truck. He knew he had to do something.

“I instructed my children to stay in our vehicle and I ran to her truck and saw the door was stuck and there was a tree blocking her window. I grabbed a shovel out of the back of my truck and thought I could put the fire out with dirt but the fire was getting out of control and the tires were starting to explode,” he said. “There was no time.”

Radford had her arm out of the window, waving to him for help and he reached in and started pulling. Williams said he pulled her halfway out her window but her lower body was trapped inside the burning truck.

“She kept saying ‘my hip, my hip, stop!’ But I told her you're going to have to use what strength you have left to help me get you out of here. I told her the fire was expanding and getting worse and after several minutes of struggling I finally pulled her out of the vehicle,” he said.

At the scene was a young man named Matthew Fortney and Williams yelled to him for help. They both pulled her to the top of the ditch. There was another explosion so they pulled her farther down the road to a safe distance.

"Without the help of Matthew Fortney I don't think I would have been able to have done it, to get her to a safe spot," Williams said. "Call it fate, but we both just happened to be on the same road at the right place at the right time. I guess my years of training with the military and security kicked in, and I just reacted to the situation."

Williams is a U.S. Army Veteran who served in Operation Desert Storm and Operation Desert Shield. Nick Williams said he was very proud of his brother and Fortney because the work they did, reacting to a situation correctly, saved a life.

Radford said that the whole accident is a blur, and she was in and out of consciousness and was unable to remember much about the wreck. She also didn't know who it was that pulled her from the accident. She suffered from five broken ribs on the right side and a fractured left hip, she said. She had a blood clot located on the left side of her abdomen, and it worked its way to her groin.

Radford is the mother of five and said she is thankful to be alive every day since the wreck. She said God sent those men that day to help her.

"I do remember that it wasn't even two minutes after he pulled me out that my truck blew up. I thank God every day for still being here,” she said. “I would very much like to meet Mr. Williams and Mr. Fortney to thank them in person for saving my life."