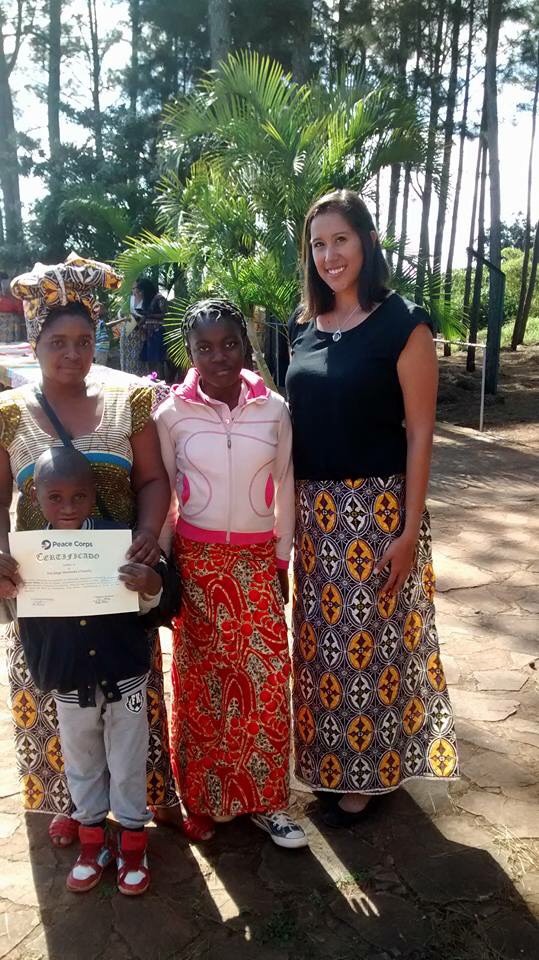 Rachel Dailey is home after spending a year in the Republic of Mozambique, Africa, as a volunteer for the Peace Corps. She returned to the United States at the end of May – just in time to put on her broadcloth skirt and dance at the Osage In-Lon-Schka.

“I’m staying at home for a while to catch up on family time, I really did miss my family a lot. This was the longest time I have gone without seeing my family,” she said. “But hopefully I want to move back to Washington, D.C., and still work with international global health projects, and hopefully get to travel to other countries as well.”

Dailey, 30, said she was enriched by her experience in Africa. She worked in the district hospital as a Community Health Worker with the Elizabeth Glaser Pediatric AIDS Foundation, which helps underdeveloped communities fight pediatric AIDS. She also worked with other community based organizations to help HIV/AIDS patients. The district she was stationed in had many high-risk patients who had abandoned their treatment and it was one of her jobs to find those patients and help them get back on their treatment.

The Republic of Mozambique is in the southeast part of Africa, on the border of the Indian Ocean. It is one of the poorest and underdeveloped countries in the world. The official language is Portuguese and the food is mostly Portuguese as well, along with traditional foods of Africa.

Dailey said when she first arrived she lived with a host family for three weeks and it was a big introduction to the community, the food, the language and the culture.

“Every morning I would wake up around 5 a.m.; it got sunny there early. I lived behind a Mosque and they have a call to prayer at 3:45 a.m. to 4 a.m., so that was also like an alarm clock. I would make breakfast; egg, oatmeal, coffee. Mostly during the week, I would drink instant coffee, shower, take a bucket bath, go into work at the hospital,” she said.

While at the hospital archived patient files, worked with at-risk children, tested patients, counseled patients with HIV and AIDS, and she would leave work anywhere from 1 p.m. to 3 p.m. to go home for the day. She would usually go to the market in town and get food for the next couple of days, she said.

“[After I got home] I would get to play with the neighborhood kids. They are probably one of my favorite parts, I loved them so much,” she said. “They would like to color, read Portuguese books. Most of them did not speak Portuguese, I speak Portuguese which is the national language.”

Her dinners every evening consisted of mostly rice and beans, followed by television or a movie. She said she was careful to stay indoors in the evening because it was mostly dangerous at night because of robbers, “which is a real problem throughout the country.”

While in Mozambique, Dailey wrote a blog called “Wandering Osage: The Adventures of Rachel Dailey.” One of the more popular posts was her hilarious account of butchering a chicken while her host family watched and laughed.

“Yes, I killed a chicken, which I will never do that again. I think my grandma has got the video and is showing it to everyone. I was crying, screaming in it, my host mom is laughing. She would get the video out at parties and show everyone,” Dailey said with a laugh. “The knives are so dull; it was like using a butter knife to butcher a chicken.”

Dailey also posted photos from a scuba diving trip that showed her swimming in the ocean.

“One of the beaches in Mozambique is Tofo Beach and is voted one of the best beaches in the world. I did a four-day course and got to see whale sharks, which are endangered ... and two manta rays swam underneath our boat. Me and a couple of people taking the class started freaking out, and our coach was freaking out, this is a for real amazing thing,” she said. “And that same day I saw an octopus and I didn’t realize what it was at first. At first I couldn’t see the tentacles and it started swimming, it was deep red when it was swimming, and then it camouflaged against the rocks. That same day on our way back to the shore we saw dolphins swimming, and it was the end to this magnificent day and there was a beautiful sunset.”

When asked if she tried to share her Osage culture with her host family, she said the cultural differences didn’t quite translate.

“Some people had heard of Native Americans before, and some hadn’t. Because they have tribes in their country and they were colonized, I tried to relate it back to that but I’m not sure it came off the way I intended it to. With my coworkers and foster family, I showed them pictures of us in our Osage clothes and they thought it was cool but I don’t know if they understood what I was trying to say,” she said. “I was just called a white person; they didn’t realize I was different and that America has a lot of different people. They have Mozambicans and foreigners. It was weird to be called white, like everyone else.”

Dailey earned her bachelor’s degree from the University of Oklahoma and her Master’s degree in Public Health in 2015 from George Washington University in Washington, D.C.

“I would definitely advocate people to try Peace Corps. I didn’t finish the whole two years, but at least try it and see and experience as much as you can. Within I got to see the entire country of Mozambique, it was such a beautiful country, and travel to surrounding countries as well. See different countries, different people, different food, things we don’t have the opportunity to see. Just try something new, step out a little bit,” Dailey said. “It’s different, but also there were a lot of things to me that were kind of the same. Community, being here at home, and being there, people had similar views on community and family because people cared about each other, everybody knew each other, and were so helpful there. While things are very different, there were a lot of things I was able to relate to back home.”