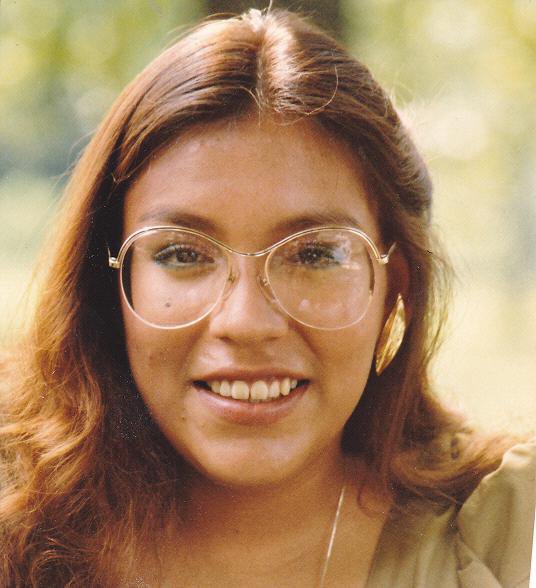 Carolyn was a proud member of the Osage Nation. She was named by Bill Pitts in the Morrell Family Chapter Native American Church in Hominy. Her Osage name was Hompa Toka and she was of the Deer Clan. She was of the Hominy District and participated in the In-Lon-Schka her entire life. She also served as the Osage Tribal Princess in 1979.

She grew up in Santa Rosa, Calif., and enjoyed swimming. She competitively swam for the Santa Rosa Neptunes.

Her family moved back to Oklahoma in her youth and she graduated from Memorial High School in Tulsa in 1980. She attended college at the University of Oklahoma where she was a co-founder of the Native American Women and Others for Multicultural Preservation and a regular at the poetry readings at the Jacobson House Native Art Organization.

She also studied art, sculpture, jewelry and museum studies at the Institute for the American Indian Arts, in Santa Fe, N.M. She interned for the Smithsonian Institute in Washington, D.C. She also participated on many archeological digs in Oklahoma, Arizona, and New Mexico and enjoyed making jewelry and other artistic works. She was an avid reader, photographer, painter, music and movie buff, and enjoyed traveling around the country and going on cruises with her sisters. She had a lifelong passion for cooking and was an amateur chef, but mostly enjoyed cooking for her family and friends. She was a huge Thunder fan and a huge fan of the OU Sooners.

Although she did not have children, she had three beloved nieces and three nephews, as well as eight grand nephews and three grand nieces. She was the fun aunt and could always be counted on to go on adventures with her nieces and nephews.

She was preceded in death by her mother Mary Agnes Wagoshe Shannon, her older brother Stanley Shannon, and niece Blake Ashley Sisk.

She will lie in state at the Wakon Iron Chapel in the Pawhuska Indian Village. There will be a rosary and songs from the Native American Church on Sunday, July 30 at 7 p.m. A Traditional Indian Service will be held at 8 a.m., July 31 with Dr. Steven Pratt officiating. A Catholic service will be held at 10 a.m. at the Immaculate Conception Catholic Church in Pawhuska. Interment will be at the Pawhuska City Cemetery, where she will rest next to her mother.